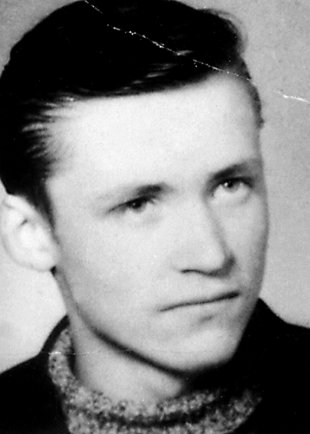 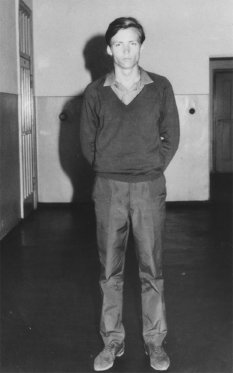 Bernd Lehmann; date of photo not known (Photo: BStU, MfS, AOP 8027/68, Bl. 51)
Bernd Lehmann, a native of Berlin, had already come into conflict with the East German law as a young boy. A report of the East German police inspection of Berlin-Friedrichshain stated that "correctional measures of different sorts including placement in a special home are being taken." [2] Bernd Lehmann had to serve a number of prison sentences for theft, fraud and forgery.

He developed his first escape plan at the age of fifteen: He planned to drive to the inner-German border in a stolen car and force his way across the border with a weapon. According to an East German police report, however, before he could go through with his plan he was "held to account for preparing to leave East Germany illegally." [3] Stasi files do not indicate whether his conduct was criminally prosecuted or whether it was addressed in connection with his incarceration in the Berlin I Penal Institution that occurred that same year. [4]

In the youth cell there, inmates discussed daring ways of escaping. Bernd Lehmann began working on a new escape plan. He planned to steal an airplane from the "Society for Sports and Technology" at the airfield near Falkenrehde in Havelland. A fellow-inmate had told him that the airfield was situated deep in a forest and guarded only by a single watchman. While in prison, he asked a fellow-prisoner to find a weapon for him. [5] Bernd Lehmann did not meet this acquaintance again until February 1968. After that the East German police and the Stasi were well-informed about Bernd Lehmann’s escape plans. His supposed friend was an informant for the Stasi and passed on to the relevant offices all the information that he could get out of Bernd Lehmann during their meetings. [6]

Bernd Lehmann was absolutely determined to flee. After he was released from his last prison term for burglary in December 1967, he was assigned to a job that he did not like. The 18 -year-old was employed as a lathe operator at the state-owned electric appliances plant in Treptow. He still had to pay compensation which left him little of his meager earnings. Bernd Lehmann was not allowed to change jobs. The staff of the internal affairs division warned him "to show some respect for the caring efforts of the state organ and to make his contribution to achieving a structured life." [7] The young man, however, dreamed of a future as a sports teacher. To reach this goal, he planned to acquire the qualification of a 10th grader at the adult education center. His mother, who had worked in East Berlin as a swimming teacher, served as his role model. [8] He evidently did not see any chance of realizing these plans in East Germany. He had difficulty getting rid of the habits that repeatedly led him into conflict with the East German laws. In May 1968 the Stasi informant reported that Bernd Lehmann had given up on his plans to escape with an airplane and only considered this as a last resort. He also regarded escaping across the border grounds to West Berlin to be too dangerous because the grounds appeared to be too strongly secured. Instead he figured that he was more likely to succeed across the inner-German border. One just had to know where the mine fields were and then make it into the five-kilometer zone unnoticed. [9]

It was perhaps a rash and spontaneous decision that ultimately led Bernd Lehmann to flee across the border to West Berlin. He had gotten into an argument with his family on the evening before he fled. He admitted to his mother that he had not shown up for work for days and was planning to start a job as a waiter. His mother worried that he would get into trouble again with the law if he were to handle large sums of money and expressed her concern to him. She threatened to report his skipping work to the internal affairs division. Bernd Lehmann tried unsuccessfully to change his mother’s mind. Bernd Lehmann left the apartment late that night. Evidently there was nothing keeping him in East Berlin anymore. Without further ado he entered the Spree and began swimming from Treptow Park towards Osthafen, where he probably hoped to cross the border to West Berlin near the Flutgraben channel. He did not know that barbed wire was installed in the water and became caught in the underwater obstacles in the Osthafen Harbor about 20 meters away from the channel and drowned painfully. [10]