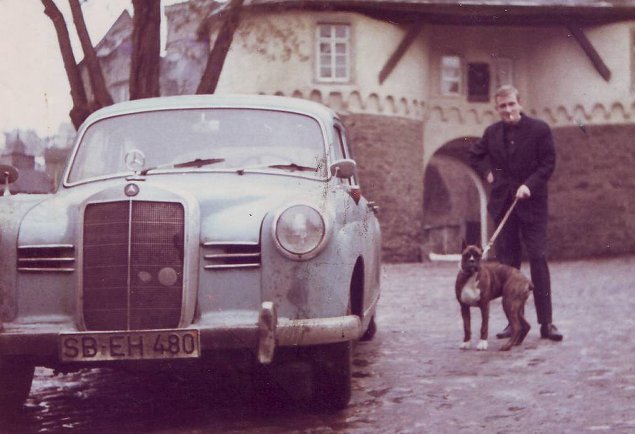 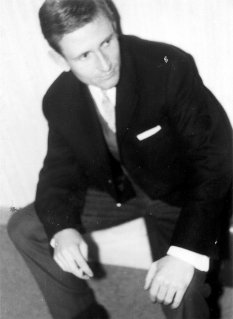 Siegfried Krug; photo: 1966 (Photo: private)
Siegfried Krug, born in Stettin on July 22, 1939, was expelled from his home during the war and fled to Erfurt with his parents and sister in February 1945. After finishing school he trained to become a high-voltage current electrician there. The East German secret police considered him to be oriented toward the West. It was said that he tore up his pioneer ID as a child. He was passionate about bike riding and had undertaken bike trips from Austria to Italy. [43] He fled to West Germany shortly before the Wall was built. [44] His married sister, who also fled East Germany, lived near Marburg. When his mother joined them a little later the family was reunited in the West.

Siegfried Krug was drawn to the big city and moved to Frankfurt am Main where he appeared to have been successful. Every time he visited his mother and sister in Marburg, he left an even better impression: He was both well-nourished and well-dressed. Sometimes he even came with his boss’s Mercedes. He worked for a publishing company, he said, but did not tell his relatives that he was employed in Frankfurt as a „pusher,” someone who sold newspaper subscriptions door to door. [45] He also had a girlfriend and was engaged to be married, an intention he soon announced publicly. The couple was planning to get married in Frankfurt in the summer of 1968.

In early July 1968 Siegfried Krug left his fiancée, telling her that he was going to Berlin. He would be back, he said, but he did not know when. [46] He told his sister that he did not want to get married and was going to disappear for a long time. [47] He flew from Frankfurt to West Berlin on July 5, 1968 and spent the night in the „Hotel am Bahnhof Zoo.” The following evening, July 6, he took the S-Bahn to the Friedrichstrasse station. He passed the border crossing at 6:30 p.m. and an hour later got out of a taxi in front of the Brandenburg Gate, which was only a ten-minute walk from the train station. [48] It was not possible to get very close to the Brandenburg Gate from the East Berlin side. The border grounds began about 300 meters in front of it. A barrier and warning signs kept everyone back who did not want to be arrested for violating the border.

Carrying in his hand a white briefcase that contained, among other things, 1,100 West German marks in large bills, Siegfried Krug walked along the left sidewalk of the Unter den Linden boulevard towards the border and ducked beneath the barrier. [49] He continued to walk across Pariser Platz towards the Brandenburg Gate. He did not move quickly or slowly. He walked as if what he was doing was the most natural thing in the world. What motivated Siegfried Krug to engage in this precarious act when he could have returned to the west side of the city legally at any time? Where did he go with the taxi from the Friedrichstrasse train station before arriving at the Brandenburg Gate? Where he had obtained the money that he had with him and what was it for? All these questions remain a mystery to his relatives and are still unanswered today. [50]

He was the only civilian on the spacious plaza and was immediately noticed by border guards who called out to him: ‘Can’t you read? You aren’t allowed to go any farther. This is the state border to East Germany.’ It is reported that Siegfried Krug answered „I don’t care. I want to go to the Brandenburg Gate.” [51] In a walking pace he passed by the guard unperturbed and was warned again. When Krug also ignored this warning, the guard fired a warning shot in the air. Alarmed by the shots, two other border guards ran to the scene to stop Krug from continuing any farther. They blocked his way with their guns clearly in view. Siegfried Krug found himself surrounded by a triangle of guards. One guard stood behind him and two stood in front of him, yet he walked on. [52]

Pariser Platz lay in the middle of the divided city and was highly visible from many sides. From the point of view of the East German leaders, it was a very unsuitable setting for a border conflict since this kind of incident would do damage to the impression they strove to achieve: the city as a peaceful capital. The border guards stationed here had been instructed accordingly.

One of the guards standing in front of Siegfried Krug warned the approaching man that he would make use of his weapon if he did not stop. „You guys aren’t shooting,” [53] Krug answered calmly and continued along, slipping between the two guards who were standing in his way. Evidently, he was confident that he would not be hindered forcefully or shot at while walking from the East to the West at this very visible public site.

The guard standing behind him fired warning shots in the air. Krug stood still and then turned around. He had covered about 50 meters and had another 250 to go before reaching the Brandenburg Gate. After hesitating a moment, Siegfried Krug turned back in the direction that he had come – and walked directly towards the guard who had fired the last shots in the air. The guard called out that he should stop and give himself up for arrest or voluntarily go to the building headquarters that were located in the former Hotel Adlon. Krug did not respond and continued walking towards the guard. Krug was unarmed and outnumbered by the guards. But the guards had never had to deal with a situation like this before and were probably not prepared for it. The guard gripped the handle of his Kalashnikov and pointed it – with one hand – at Krug. When the young man with the white briefcase came within a few meters of him, the guard aimed his gun at Krug and fired. One burst of fire and all three shots hit Siegfried Krug in his stomach, chest and upper arm. [54] He was quickly removed from view and brought to the People’s Police Hospital where he died an hour later.

The guard who fired the shots was, as usual, promoted and awarded a medal. [55] But some of the soldiers who knew what had taken place protested. A lieutenant colonel of the border troops concluded in his report that because the border guards had a great advantage over the perpetrator, the guard „should have acted differently.” [56] The guard in question did not learn that he had killed Krug until he was interrogated by the police in 1992. [57] The Berlin district court convicted him of manslaughter and sentenced him to two years probation. The court decision stated that he had „simply shot and killed an obviously unarmed and defenseless intruder who was not dangerous.” [58] A case against members of the East German secret police and East German military state prosecutor for perverting justice and serving as an accessory to the fact was dismissed by the Berlin public prosecutor’s office in mid-1998 due to a lack of probable cause. [59]

In July 1968, the West Berlin Senate and the federal government of West Germany criticized the shooting: The West Berlin „Studio at the Barbed Wire” set up a poster at the Brandenburg Gate with a warning to the border guards: „Those who praise you today will disown you tomorrow!” [60]

The incident was observed on both sides of the Brandenburg Gate but nobody knew that the man who was killed had not been an East German fugitive but a citizen of West Germany – except the Stasi, of course. This provided them with an ideal opportunity to have the dead man cremated and then make him disappear. The Stasi made sure that any inquiries from the East German authorities concerning the dead man remained unanswered. [61] Consequently, Siegfried Krug was buried anonymously in Treptow in gravesite P 1 R – 229. Neither his fiancée in Frankfurt am Main nor his mother and sister in Marburg ever received information from the East German authorities about his fate. [62] Siegfried Krug was considered missing for years and his relatives continued to hope for his return. [63] They did not find out about his death until 1991.