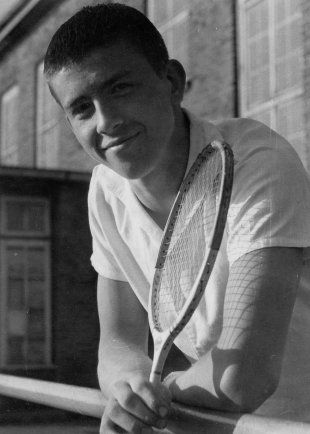 Horst Körner, born on July 12, 1947 in Wolfen, completed secondary school and then attended a vocational school of the state-owned film factory in Wolfen. He had qualified as a mechanic and had his high school degree in his pocket in the summer of 1967, but instead of serving in the military, something he may have wanted to avoid, he became a candidate for the Criminal Police division of the East German police district office in Bitterfield. [23] He was promoted within a year to sergeant. One of his main responsibilities was to address property crime cases, but this did not interest him and, in early March 1968, he requested to be released from his police duty. At the same time he applied to an advanced college in Beichlingen where he hoped to study veterinary medicine. His superiors at the East German police probably convinced him that his application would be hopeless without their approval. In any case, under pressure, he withdrew his release request and instead agreed to pursue a „development plan" that would allow him to work towards the position of officer within the Criminal Police.

Horst Körner: Death at the Babelsberg Palace Park (photo: East German border troops) (Photo: BStU, MfS, HA Nr. I 5763, Teil 2, Bl. 174)
At the age of twenty he was a promising police officer as well as a member of the Communist Party. His superiors were pleased with him. In early September 1968 he was sent to participate in a seminar at a school for criminological basic training and further education run by the East German Ministry of the Interior in Potsdam. It seemed as if he had come to accept his situation. But a farewell letter he wrote to his parents, which he had with him during his escape, clearly revealed that the 21-year-old had by no means come to terms with his professional situation. „This may be my last greeting to you. I am almost at the border. [...] I have caused you much distress, but believe me, I stopped living a long time ago." [24]

On November 15, Horst Körner had to substitute for a comrade on short notice and guard the Potsdam criminal police school between 9 p.m. and 11 p.m. He had told his roommate about a quarrel that he had with his girlfriend a few days earlier and this may have been the deciding factor that led him to try to flee. It seemed he had been presented with an unexpected opportunity: [25] He asked to be stationed on the outer position and managed to leave his station armed and unnoticed. He reached the nearby train tracks of the Deutsche Reichsbahn, the East German railroad company, where he left his steel helmet, his munitions bag and an empty gun magazine. Then he walked along the tracks across the Havel Bridge to the Potsdam City train station. He probably traveled from there across Alt Nowawes through the Babelsberg Palace Park towards Klein Glienicke. Here, at the spot across from the famous Glienicke Bridge, the border became very tricky. In order to get close to the death strip from here, Horst Körner would have had to pass the heavily guarded bridge that runs across the Teltow Canal into the enclave Klein Glienicke; alternatively, he could have entered the water of the canal or Havel River, which was very cold at this time of year. It is not clear whether Horst Körner thought he had an advantage here with special internal police knowledge of the area or whether the local border here was completely unfamiliar to him.

At the same time Horst Körner was unexpectedly noticed by two border guards on control duty in a Trabant „Kübel." They saw him standing behind a tree in a police uniform and initially thought he was the police officer in charge of this section of the border. According to the investigation results of the East German secret police, when the border soldiers turned around and Horst Körner realized he had been seen, he opened fire on the army vehicle. [26] He fired continuously at the driver, Private Rolf Henniger, through the windshield. The driver was hit by a number of bullets in his chest and head, and collapsed behind the steering wheel. The other soldier in the passenger seat had jumped out of the vehicle and shot at Horst Körner with numerous bursts of ammunition from his machine pistol. He died immediately. The border guards found an envelope in one of his uniform bags upon which he had written words of farewell to his parents. „I would rather die than let myself be caught." [27] Rolf Henniger, the man whose life he claimed with his own, happened to be a border soldier who had also been thinking about escaping. [28]

The next day the East German secret police searched Horst Körner’s parents’ apartment. They were told that their son had been shot and killed after he had killed another border soldier while trying to escape. [29] The East German secret police ordered that the body of Horst Körner be cremated. The funeral took place in the presence of his immediate family at the cemetery in Greppin near Bitterfeld.

The East German authorities kept the policeman’s identity a secret from the public. The Communist Party-controlled media only spoke of an „armed agitator" and „murderer." Nothing else was revealed. [30] Rolf Henniger, the private whom he killed, was elevated to the status of a hero and buried amidst a major propaganda campaign in his hometown of Saalfeld in Thuringia. [31] The West Berlin mayor, Klaus Schütz, spoke of two victims of inhumanity that showed „that we must not forget how unnatural the Wall, barbed wire and the order to shoot fugitives is for Germany." [32]

In 1992 the case was opened by the Berlin public prosecutor’s office against the guard who shot at Horst Körner, but was dismissed in 1994 because it was recognized that his use of firearms had been justified by self-defense. [33] 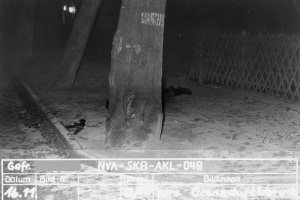