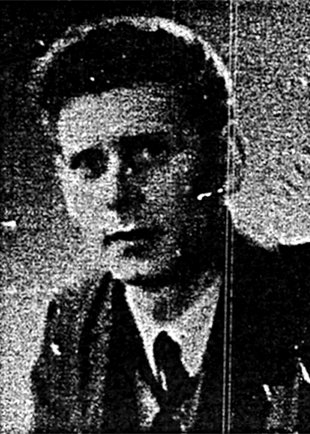 near Fritz-Heckert-Strasse
on the sector border between Berlin-Mitte and Berlin-Kreuzberg
It was almost dark when he returned at around 10 p.m. He climbed over the interior fence and the anti-tank obstacles unnoticed, but when he climbed over the signal fence he triggered an alarm. Colored flares shot off, helping the border guards on the watchtower to identify the location of the fugitive.Johannes Lange, born on December 17, 1940 in Dresden, trained to become a decorative painter. Before he got into trouble with the law, he had been a volunteer for the East German police. He fled to West Germany on March 31, 1959. [1] Two years later, after the Wall had been erected, he returned to East Germany. He explained to the East German authorities that he wanted to evade having to serve in the West German army, but they did not excuse his previous flight from East Germany. In 1962 an East German court sentenced him to a year in prison for evading the East German military registration by "illegally leaving the Republic" two years earlier. An East German secret police report claimed that after he was released from prison he was "expelled from his parents’ house." He moved to Dresden to live with his girlfriend and her children. [2] 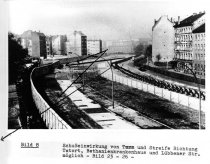 Johannes Lange: West Berlin police crime site photo showing impact of shots fired in the direction of Berlin-Kreuzberg [April 9, 1969] (Photo: Polizeihistorische Sammlung/Der Polizeipräsident in Berlin)
In the summer of 1968, when his relationship with his girlfriend, with whom he had a child, ended and his conscription into the National People’s Army was imminent, Johannes Lange once again decided to flee. He tried to cross the Czechoslovakian border to West Germany in early August. The Czechoslovakian border guards arrested him and handed him over to East Germany, where he was given a year and three month suspended sentence in October. After that a general travel ban was imposed on him. He worked as an unskilled laborer for a building combine in Dresden and lived in the company’s bachelor dormitory. He was seen there for the last time on March 30, 1969.

Ten days later, on April 9, 1969, border soldiers observed Johannes Lange as he inspected the border grounds to West Berlin at the corner of Adalbertstrasse and Fritz-Heckert-Strasse near the Berlin-Mitte Hospital and then backtracked. [3] It was almost dark when he returned at around 10 p.m. He climbed over the interior fence and the anti-tank obstacles unnoticed, but when he climbed over the signal fence he triggered an alarm. Colored flares shot off, helping the border guards on the watchtower to identify the location of the fugitive.

Shots were fired at him from two watchtowers and duty replacements, who had just arrived on duty, also fired at the fugitive. Eight border soldiers fired a total of 148 shots at Johannes Lange. Right before he reached the last obstacle, the three-and-a-half-meter-high concrete wall, he was hit by five bullets in the back of his head, neck and thigh and died immediately.

The guards rushed to the site and quickly dragged the dead man behind one of the watchtowers so people on the West Berlin side could not see anything. A report from a Stasi informant revealed that a paramedic from the nearby hospital in Mitte had wanted to administer first aid but was "very gruffly sent away." [4] A few days later the guards involved were awarded medals and promoted. Each of three soldiers received a wristwatch as a "gift." Almost 30 years later, one of the guards was tried by the Berlin district court for attempted manslaughter and sentenced as a youth to a year and three months on probation. The court was unable to prove that the other guards had aimed their shots at Johannes Lange. The man who was convicted had been 19 years old at the time of the shooting. The incident had deeply affected him psychologically, leading him to seek professional medical care. Later, in 1985, when he was frustrated by the lack of free speech, the strong state presence in their lives and the poor living conditions in East Germany, he and his wife applied for an exit visa to leave the country. He was allowed to move to the West with his family in May 1989. [5]

Alarmed by the sounds of bullets, a number of people on the east and west sides observed the shooting that night. Patients in a nearby hospital in Berlin-Mitte insulted the border guards as "scallywags, criminals and murderers." [6] The East German secret police later tried to find out which patients "had thrown insults from the hospital." [7] A number of bullets hit both sides of the curved border there. In the East Berlin hospital in Mitte, a window rattled and a bullet landed on a table in the nurses’ staff room. The West Berlin Bethanien Hospital in the Kreuzberg district was also hit and windows of nearby apartments were shattered. The East German secret police registered all the bullet shots and concluded that "bodily injury did not occur during the entire action." [8]

One day after the fatal shots that killed Johannes Lange were fired, West Berliners set up a wooden cross and laid a wreath at the site. The inscription read: "We free citizens grieve for you. You will not be forgotten." [9] The "Studio at the Barbed Wire" put up signs in clear view of the border guards that read: "Soldier, you are alone in your guilt." A citizen of West Germany filed charges of murder against the border guards with the East German military state prosecution. He did not expect to have any success with it he told the Central Registry Office in Salzgitter, but the East German leaders should at least be made aware of "how these acts are regarded in the Federal Republic." [10] The shooting was condemned by the federal government and the Berlin Senate and the three Allied city commanders criticized "this case of merciless cruelty and disrespect for human life." [11]

Johannes Lange’s body was cremated in the Baumschulenweg Crematorium on April 15, 1968 and buried in his father’s urn site a short time later at the Neustädtische Cemetery in Dresden. [12]