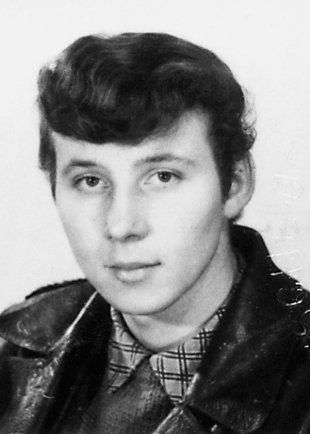 Klaus-Jürgen Kluge, born on July 25, 1948 in Schönow near Bernau, attended the secondary school in his hometown and graduated following the tenth grade. He successfully completed an apprenticeship as a pattern maker in spring 1969. [27] The older he became, the more critical he was of East Germany. A Stasi informant reported that Klaus-Jürgen Kluge had often commented „negatively about the lack of provisions" in East Germany and compared „everything with the ‘good development’ in West Germany." [28] Thus, the Stasi considered him one of those people who did not fit in with the image of the „new people" living in „real-life socialism": „Klaus Jürgen is not in a party. He is not engaged in organizations. His attitude towards our state is negative […]. His physical appearance, long hair, pants with wide bell-bottoms and fly appear decadent." [29] In November 1969, just after an acquaintance of Klaus-Jürgen Kluge had successfully fled to the West, he was supposed to begin his service in the detested NVA. [30] At this point, at the very latest, he seemed to believe his only way out was to escape to West Berlin.

Klaus-Jürgen Kluge left his parents’ house in the afternoon of September 13, 1969. He said he was going to attend a dance. [31] In truth, however, he drove to East Berlin where, at around 8:40 p.m., he entered the border grounds in the former S-Bahn-Gleisdreieck, south of the border crossing at Bornholmer Strasse. [32] Near the Helmut-Just Bridge, he was able to get past the first border facilities unnoticed, but when he climbed over the signal fence he triggered an alarm. [33] In response a border soldier left his watchtower, but he intentionally moved slowly: He feared having to shoot at somebody and secretly hoped that an animal had set off the alarm as had often happened in the past. Having reached the bottom of the tower, the border soldier fired a flare in the air that temporarily blinded him. The guard leader, who was still in the tower, saw Klaus-Jürgen Kluge at the Wall. When the guard down below did not react to his order to arrest the fugitive, he stormed down from the tower. He ran to the Wall and, without calling out or firing a warning shot and while still running, he fired two shots from the hip from a distance of about 60 meters directly at the fugitive, who had already flung his upper body over the Wall. [34] Two bullets hit him in the chest and head causing Klaus-Jürgen Kluge to fall down. He died from his wounds within minutes.

His body was brought to the observation tower a short time later and was taken from there to the People’s Police Hospital in Berlin-Mitte. To the satisfaction of the East German secret police, by the time the local and French military police arrived on the West Berlin side to illuminate the area and take pictures, the body had already been removed. The border guards involved in the shooting were awarded medals and bonuses by the regiment commander the following day. [35] In 1997, in unified Germany, the man who killed Klaus-Jürgen Kluge was tried by the Berlin district court and convicted as a youth to a one-year-and-four-month suspended sentence. The guard under his supervision was acquitted. [36] The gunman’s supervisors also stood trial two years later for accessory to manslaughter. The former regiment commander was sentenced to a year and three months in prison and the man who had served as chief of staff was sentenced to a year in prison. [37]

Klaus-Jürgen Kluge’s parents were not informed by the East German secret police of their son’s death until his body had been cremated. The Stasi demanded that they tell their relatives and friends that their son died in an accident in Berlin. [38] The urn with Klaus-Jürgen Kluge’s ashes was buried in the cemetery in Schönow under the surveillance of the East German secret police on October 8, 1969. [39]