at the Berlin-Schönefeld airport
On the morning of March 10, 1970, just before 8 o’clock, the young couple and 15 other passengers boarded the AN-24 airplane to Leipzig run by the East German airline, Interflug. Shortly after take-off, Eckhard Wehage held his pistol in front of him and ordered the stewardess to establish contact with the pilots and tell them to fly to an airport in Hanover.Eckhard Wehage was born on July 8, 1948 in Berssel. When he was fifteen, he tried to flee to the West with a friend in a boat across the Baltic Sea, but the boys aroused suspicion before they had even cast off. They were arrested by the East German police on May 10, 1963 and sent back to their parents.

The same year, on August 21, Eckhard Wehage made a second attempt to leave East Germany, this time alone. His plan was to take a train to Czechoslovakia and to flee from there to West Germany. But this attempt also failed and he was arrested in Adorf, Vogtland. The first time he was arrested, the East German authorities had taken his young age into account and had refrained from opening an investigation. Following his second attempt, however, charges were filed against him for "fleeing from the republic." The court responsible for juvenile cases sentenced Eckhard Wehage, age 16, to eight months probation on October 18, 1963. [1] A "protective chaperone" was also assigned because of "considerable errors in his upbringing by his parents." [2] The court explained that he should realize that "it is in his own interest that the worker and peasant state not allow him to cross over from a socialist state to an exploiter state." [3]

After this Eckhard Wehage seemed to have accepted the conditions in East Germany. By 1967 he had joined the East German Marines and enlisted for ten years as a professional soldier. He graduated from the non-commissioned officer school in Stralsund, after which he was assigned to a de-mining boat as chief petty officer. [4]

It was during this time that he met Christel Zinke, born on December 15, 1946 in Wolmirstedt. She worked as a psychotherapist in her hometown’s district hospital. [5]

They soon married and tried to start a family, but were confronted with the restrictions and regimentation of adult life in East Germany: Residents of East Germany were unable to choose their own place of work or residency. The state delegated where graduates worked and lived. For years the couple did everything to acquire an apartment together in an area where they both could work. In the farewell letters that they wrote to their parents, they explained in detail their reasons for their joint escape attempt. The apartment dilemma played a central role in their justification: If they had had children then, after waiting for an indefinite period of time, they might have been "provided" with common living quarters. "But we cannot afford to have children under the current uncertain circumstances. That would only make the dilemma greater." [6]

The Wehages did not want to spend their young lives waiting. In spring 1970, when their hopes of being allocated an apartment together were dashed, the couple resolved to flee to West Germany by hijacking an airplane. Eckhard Wehage was able to get into the armory of his unit and remove two pistols and ammunition before he took off on a short leave from duty. He met his wife in East Berlin. The couple booked two seats on a scheduled flight from East Berlin to Dresden on March 9, 1970. [7] When the flight was cancelled they tried again. They purchased two tickets on a flight from East Berlin to Leipzig that was scheduled to depart the following day. They spent the night in the hotel at the Schönefeld airport. Their parents received the farewell letters that they had written to them from there. [8] In his letter, Eckhard Wehage acknowledged the possible consequences of a third escape attempt: "All we want is to live our own lives the way we would like […]. Should our plan fail, Christel and I are going to depart this life. […] Death is then the best solution." [9] 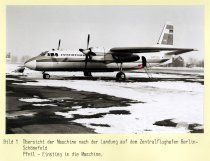 Seconds before the plane landed a passenger called out in surprise that they were back in Schönefeld. When Christel and Eckhard Wehage looked out the window, they realized that their escape attempt had failed. The couple went back to their seats while the plane landed. Then the shots were fired. Christel and Eckhard Wehage had killed themselves. [10] Their bodies were cremated in East Berlin and later buried at a cemetery in Magdeburg in the presence of their close family circle. [11]

After this the parents of the victims became the focus of a secret police investigation. A "counter measure plan" from March 15, 1970 stated that "operative techniques in the apartments and mail inspections are to be engaged in." [12] Their apartments were searched and "bugged," they were kept under surveillance during their daily activities, and they were interrogated with regard to possible "complicity." The secret police was able to "convince" both sets of parents to cooperate in disguising the true circumstances of their children’s death. Relatives, friends and work colleagues were told that Eckhard and Christel Wehage had been driving in a company car on their way to Rostock where they were going to look at an apartment when they crashed into a tree and died. "In response to any possible curious inquiries, both couples will explain that the accident was the result of driving at too high a speed along icy roads and that there were not any witnesses." [13] Stasi informants were also told to record and influence the mood of the people in the area where the parents lived. [14]

Despite all the efforts on behalf of the Stasi to conceal the truth, rumors connecting the death of the two young Wehages to the failed hijacking of an airplane in Berlin-Schönefeld could not be silenced. [15]

During an elaborate celebration on March 26, 1970, the crew of the hijacked Interflug plane was granted the NVA Gold Medal of Merit, awarded to them personally by Stasi minister Erich Mielke. The minister also gave the pilot a stereo radio, the co-pilot a tape recorder, the mechanic a rug and the stewardess a knitting machine. [16]

A quarter of a century later a former citizen of East Germany contacted the Central Investigating Agency for Governmental and Party Crimes and reported on the Wehage’s fatal escape attempt. In response, the public prosecutor’s office opened an investigation in October 1996. But the case was dismissed in June 1997 because no evidence of criminal action on the part of the East German authorities could be found. Charges against Christel and Eckhard Wehage for any crime they may have committed were made gratuitous by their deaths. [17]