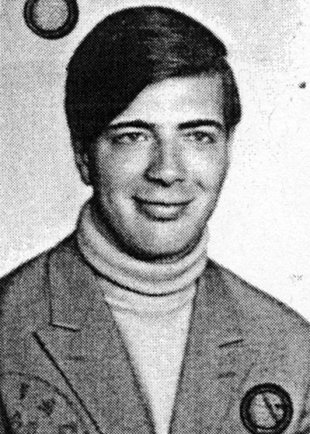 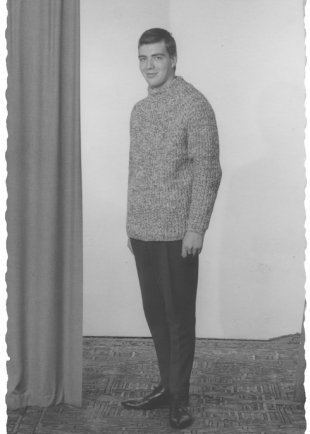 near the Schilling Bridge
at the sector border between Berlin-Kreuzberg and Berlin-Friedrichshain
No one could understand the words he called out. The East German border soldiers registered the "agitator." In the middle of the night, at around 1:50 a.m., Müller, intoxicated, either fell or climbed over the Berlin Wall – or he may have been pushed by someone. 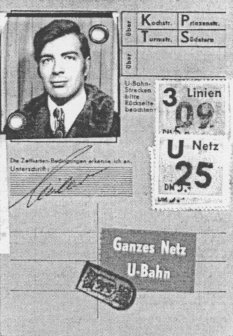 Heinz Müller: Berlin public transportation pass (issue date not known) (Photo: BStU, MfS, AS 754/70, Bd. 9, Nr. 2)
Heinz Müller was born on May 16, 1943 in Rostock. He was raised by foster parents in Medebach in Sauerland, West Germany. It has not been possible to reconstruct when and how he came to the west zone or West Germany, but once there, he trained to become a commercial clerk and after completing his training found a temporary position in a department store in West Berlin. His foster father later told the West Berlin police that his son enjoyed spending his weekends in East Berlin. He visited acquaintances there and often dined in restaurants. [1]

On June 18, 1970, Heinz Müller spent the afternoon hours on a viewing platform in front of the Wall in the Kreuzberg district. Residents on the East Berlin side in the Friedrichshain district watched as he stood with a bottle in his hand and gesticulated demonstratively towards East Berlin. No one could understand the words he called out. [2] The East German border soldiers registered the "agitator." In the middle of the night, at around 1:50 a.m., Müller, intoxicated, either fell or climbed over the Berlin Wall – or he may have been pushed by someone. He probably did not realize what had happened until he found himself in the glaring light of the security grounds. Disoriented, he began walking around within the border grounds. A border guard in a nearby watchtower on the Schilling Bridge noticed him and fired two shots in his direction from a distance of 200 meters. Heinz Müller was hit in the hip and collapsed. He cried out in agonizing pain for help. When the border soldiers approached him, he screamed: "You swine!" Witnesses watching the incident from their nearby apartments in East Berlin called out to the border guards: "You murderers! Help him!" [3]

When an officer arrived, Heinz Müller was dragged to a nearby bunker and given first aid. Another hour passed before he was taken to the People’s Police Hospital in an army vehicle. He was operated on immediately but could not be saved. Heinz Müller died from his injuries at 4:50 a.m. [4]

His body was cremated on July 31, 1970 in Berlin’s Baumschulenweg Crematorium and the urn was buried in the Baumschulenweg Cemetery. The man who fired the shots was soon commended for his actions and awarded the Border Troop Badge of Merit. The other border guards involved received gifts and extra vacation time. They were not told that Heinz Müller had died. [5]

The Berlin public prosecutor’s office brought charges against the gunman in November 1991. The Berlin district court sentenced him as a young offender to a two-year prison sentence that was commuted to probation. [6] The verdict came into force on April 19, 1994, after the Federal Court of Justice rejected the appeal.

At the time of the shooting, nobody in West Berlin knew that Heinz Müller had died in June 1970. When he did not show up for work three days in a row, he was fired. [7] A colleague reported him missing on July 3, which led the West Berlin police to have firemen force open the door to Heinz Müller’s apartment, where all they found was a tidy room. [8]

Heinz Müller’s foster parents began to search for him but he remained missing without a trace. Over the following weeks and months, his foster father repeatedly inquired with the police on the progress of the investigation. He feared that his foster son might have been arrested in East Berlin. [9] But the West Berlin police could not find out anything because the East German authorities remained silent on the matter. Inquiries suggesting that Heinz Müller may have shown up in East Berlin were refuted by authorities there. [10] Consequently, no information about the real reasons for his absence could be attained. Only after German reunification did it become known what really happened to Heinz Müller on the night of June 1970. [11]

The death certificate issued by East Germany for Heinz Müller listed an East German address. [12] The secret police presumably created a "legend," a false identity for the victim, and pretended that he was a citizen of East Germany so that the inquiries from the West would be fruitless. [13]