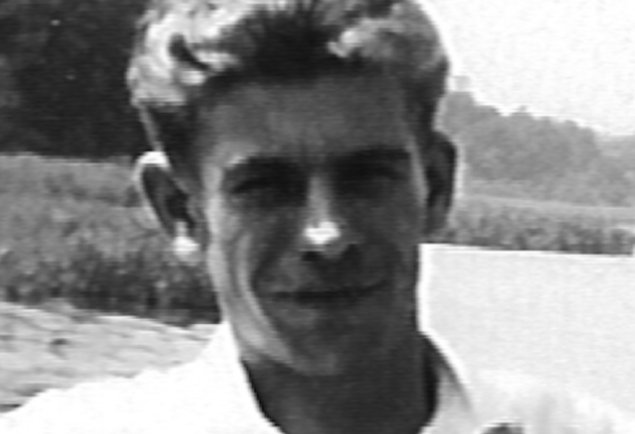 in Falkenhöhe near Pestalozzistrasse
on the outer ring between Falkensee (Nauen district) and Berlin-Spandau
Apparently the guards on the tower did not see any reason to get involved but the guard at the gate raised his machine gun, aimed at the motorcycle tires and fired. Seven shots were set off.Helmut Kliem returned home from his night shift on November 13, 1970 at around 6:45 in the morning. His wife, who also worked, had already left the house with their two children, whom she dropped off at daycare on her way to work. Helmut Kliem’s half-brother Bernhard had the day off and had announced that he would stop by for a visit that morning.

The brothers went to the „Volkshaus" restaurant in Staaken and had a few beers and schnapps with their lunch. They were looking forward to the upcoming weekend and planned to attend a Carnival party that evening. Both of them were relatively well-off: Three years earlier Bernhard P. had served a youth sentence in prison for „attempting to flee the republic," but now he had a well-paid position with a highway construction company. Helmut Kliem, who was born on June 2, 1939 in Ebereschenhof, had worked since 1957 as an East German police officer and, after serving guard, patrol and light duty, had recently been appointed head constable for security of the locomotive and electric technical plant in Hennigsdorf. [1] He lived with his family in Staaken, which was situated directly on the border of the West Berlin district of Spandau. 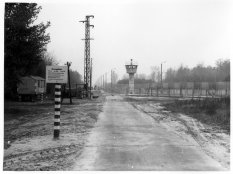 Deep in conversation with his brother, he missed the exit onto the dirt road that led to his wife’s work place and to the daycare center. Instead he continued driving straight ahead and soon found himself in front of the gated entrance to the border grounds. [2] He had overlooked the signs marking the border territory and stopped about ten meters in front of the gate. He saw a border soldier behind the gate. Two guards stood on a watchtower behind him. He had clearly gone the wrong way. He turned the motorcycle around to drive back. Perhaps he did not take the border soldier seriously when he ordered the motorcycle driver to stop. Perhaps he did not hear the call or a possible warning shot over the noise of the motor. In any event, Helmut Kliem accelerated in order to leave the area quickly. 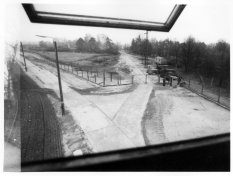 Helmut Kliem: View from the watchtower to the border grounds and access road [Nov. 13, 1970] (Photo: BStU, Ast. Potsdam, AU 70/71, Bl. 72)
Apparently the guards on the tower did not see any reason to get involved but the guard at the gate raised his machine gun, aimed at the motorcycle tires and fired. Seven shots were set off. He later claimed that he was not aware of having set his Kalashnikov on automatic fire. In a standing position and without holding on to anything, he fired his gun at his target which was 30 meters away. Every guard was taught that a Kalashnikov tends to swerve upward and to the right of the target when set on automatic fire and this is what happened. Instead of hitting the motorcycle tires, the bullet went through Helmut Kliem’s shoulder blade, hitting the upper arm artery and blood vessel. His brother was also hit in his hand, and another bullet just barely missed him. Helmut Kliem braked, got off the motorcycle and took a few steps towards the guard before he collapsed to the ground. A resident who heard the shots and rushed to the site to help Helmut Kliem was held back by the border guards who held their machine pistols in front of them. [3] Later a guard maintained that Bernhard P. had screamed excitedly to him „Go on and shoot you Saxon bastard, go ahead and shoot me, too," before he noticed his own pain and realized the severity of the bullet wound through his brother’s torn leather jacket. [4] The brothers were not given any medical care until an hour later when the ambulance arrived and took them to the Staaken Hospital. [5] By then it was too late for Helmut Kliem. He bled to death from his injuries at around 4:30 p.m. [6] 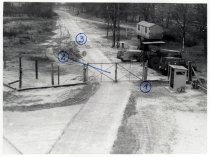 Helmut Kliem: Positions of Helmut Kliem, Bernhard P. and the other border guards [Nov. 13, 1970] (Photo: BStU, Ast. Potsdam, AU 70/71, Bl. 71)
Even the official regulations of the border guards did not justify using a weapon in this situation. There had been no recognizable threat of a border breach. According to the East German criminal code, the death of Helmut Kliem qualified as murder. [7] But the military prosecutor did not investigate the case. Colonel Krug, commander of the border brigade, certified that that border guard had acted according to regulation and had engaged in „exemplary, class-appropriate conduct" that was to be „evaluated" by all troop units. The city commander also informed Erich Honecker of the incident. [8] The border guards involved were awarded medals and promoted the very same day. The man who pulled the trigger was awarded the „Medal for Exemplary Service at the Border." The fact that he had fatally wounded his target was scrupulously concealed from him. He did not learn the truth until the 1990s. In 1997 the Potsdam district court tried him for manslaughter in coincidence with attempted manslaughter and sentenced him as a youth to a year and eight months in prison which was commuted to probation. [9]

Helmut Kliem’s wife waited in vain for her husband to arrive at 4 p.m. on November 13, 1970. Disappointed, she picked the children up and walked home. That evening two strangers showed up at her door identifying themselves as criminal police from Potsdam. They asked her questions about her husband but did not provide her with any information. She did not find out that Helmut Kliem was dead until November 14, 1970 when she appeared at the Potsdam district authority of the East German police. They did not tell her how he had died and she was denied her request to see her husband’s body. They told her that the body had already been cremated, although this was not true. [10]

At the same time her brother-in-law was being interrogated by the Stasi in Potsdam. On November 13, 1970 he was transported directly from the Staaken Hospital to the Stasi remand prison in Potsdam where preliminary proceedings for suspicion of „illegally leaving" East Germany were opened and an arrest warrant was issued. The Stasi interrogators tried unsuccessfully to force a confession out of him. The political division of the Potsdam state prosecutor’s office waited 14 days before dismissing the case. Another week passed before the arrest warrant was revoked and Bernhard P. was released from prison. [11] The death of his brother was then presented to him as a regrettable accident. [12]

Both Helmut Kliem’s wife and half-brother were sworn to secrecy about what had happened. In Staaken various rumors spread, but no one found out the truth. The supervisor of the „Border Work Group" of the East German police in Nauen apparently came closest to the truth: During questioning in the hospital he learned what had really happened. He was unable to reconcile the murder with his conscience and in an act of protest handed over his weapon and announced that he was quitting his service at the border. [13]

Almost three months passed before the urn with Helmut Kliem’s ashes was buried on February 4, 1971 in the cemetery in Falkensee. [14]