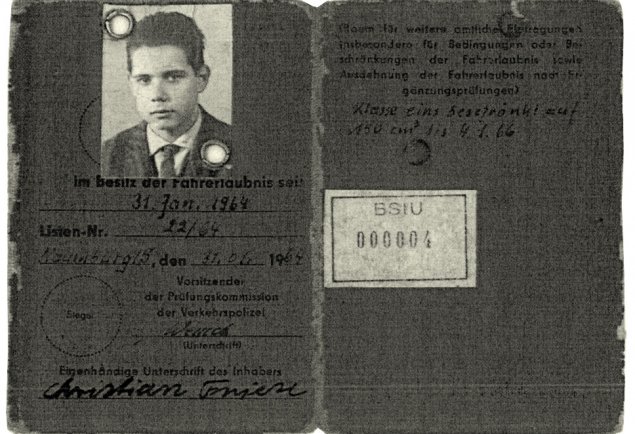 on the Köllnische Heide rail embankment in Johannisthal
at the sector border between Berlin-Treptow and Berlin-Neukölln
That evening, December 24, 1970, Christian Peter Friese was riding on a train to East Berlin. Later he hid in a small garden colony located near the border in Treptow and observed the border grounds. At around midnight he climbed the interior fence unnoticed. 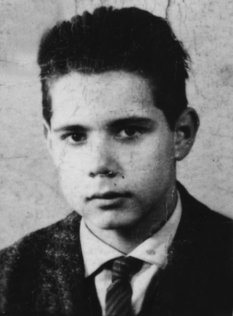 Christian Peter Friese; date of photo not known (Photo: BStU, MfS, AS 754/70, Bd. 6, Nr.3, Bl. 4)
Christian Peter Friese, born on January 5, 1948 in Munich, grew up as an only child with his mother in Naumburg. His mother’s husband had been missing since 1944 and was officially declared dead; the name of his biological father was not recorded. After finishing school he did a motor mechanic apprenticeship in a motor vehicle company. When he had successfully completed his training he moved with his fiancée to Karl-Marx-Stadt - today’s Chemnitz - but soon returned to Naumburg alone. [1] He worked there as an automobile motor mechanic for the Reichsbahn, the East German railway company, and worked as a volunteer for the „Naumburger Settlement Club," a youth center in his city. The director of the clubhouse confirmed his commitment to a „positive and high-quality club life." She also noted that he was „always a good role model" for the young people. „Because of his night classes," he had to give up his head position to a younger club member. [2] The State Security saw this differently: It claimed he had a „bad reputation" in his neighborhood, supposedly due to his „penchant" for western beat music and that he spread a „decadent view of art" and bore an „unstable attitude towards the social development in East Germany." This was the reason he had to be replaced as club leader. [3]

After Germany was unified, his mother testified to the Naumburg police in 1992 that her son had repeatedly stated that he wanted to „take off" to the West if the opportunity presented itself. The twenty-two-year-old man did not agree with the conditions in East Germany and in particular did not want to serve in the National People’s Army. [4] Although a friend of his had tried to escape to West Berlin in 1968 and was caught and put in prison, this did not deter Christian Peter Friese from pursuing his own escape ambitions. „They won’t catch me," he had told his mother. [5]

At the end of 1970 Christian Peter Friese was living in the same apartment building as his mother. She stopped by to pick him up on Christmas Eve, but he was not in his room. He had not said goodbye and did not leave a letter behind. But his mother noticed that a few things were missing that were important to him, including a photo album, a tape recorder and some clothing. „My first thought was that he had left for Berlin," his mother put on record in the early 1990s. [6] That evening, December 24, 1970, Christian Peter Friese was riding on a train to East Berlin. Later he hid in a small garden colony located near the border in Treptow and observed the border grounds. [7] At around midnight he climbed the interior fence unnoticed. When he crawled under the signal fence and jumped over the trip wires placed there, he triggered an alarm. The grounds there were in clear view from two watchtowers to the right and left. Moreover, an „alarm group" had been posted on the four meter high railway embankment of „Köllnische Heide" for Christmas Eve. There was good visibility and the border grounds were well lit. Five border guards fired a total of 98 bullets at the young man. He sought cover in the anti-vehicle trench, after which the shooting stopped for a moment. He then continued running and again came under fire. Just a few meters in front of the last border fence he collapsed to the ground, badly injured. [8] He had been hit by a number of bullets in his thigh and calf. Border guards testified that he called out: „My legs, my legs." [9] He died on the death strip from bullet wounds through his stomach and chest. Twenty-eight years later the border guards involved in the shooting were acquitted by the Berlin district court because an intent to kill could not be established and because the person responsible for the actual killing could not be determined. [10]

Residents on both sides of the border were awakened by the shots. A number of bullets hit trees and building fronts on the West Berlin side. West Berliners called out to the border guards: „Murderers! Pigs!" [11] The incident caused major protests. A speaker of the West Berlin Senate explained that the incident „once again showed clearly the ‘power-obsession’ of a regime that does not know humanity." [12] The American city commander characterized the incident „as another demonstration of the frivolous disrespect for human life by zone organs." [13] The West Berlin police opened an investigation.

Christian Peter Friese’s mother already suspected that it might have been her son who was killed when, on Christmas Day, she heard on western television that a young man had been killed at the Berlin Wall. Many days of uncertainty passed before the East German secret police informed her on January 7, 1971 that her son was dead. She was lied to about the circumstances under which he died: The Stasi agents told her that her son „died in an accident" in East Berlin while „engaging in illegal activity." They said that he crashed into a tree with a car and died from the accident. They told her that his body had already been cremated. [14] The Stasi pressured his mother to sign a statement in which she promised to tell her acquaintances that her son had died „in a car accident," and that she had requested the „state organs to argue similarly in the interest of her reputation." [15]

The urn was sent to Naumburg a month after Christian Peter Friese’s death. The funeral took place on the municipal cemetery in Naumburg under Stasi surveillance. [16] A short time later his life insurance was paid out to his mother because her son had ‘officially’ died in a car accident. [17]