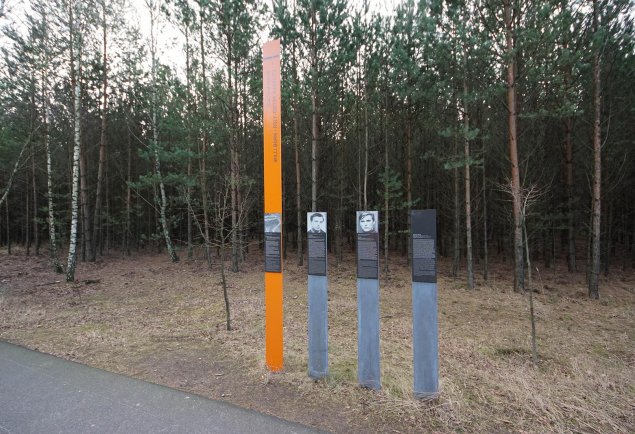 shot on January 7, 1971
on the outer ring between Bergfelde (Oranienburg district) and Berlin-Reinickendorf

Rolf-Dieter Kabelitz, born on June 23, 1951, was four years old when his mother divorced his father and re-married. [17] After this he lived in Potsdam with his mother and stepfather, a captain in the East German police. His relationship with the officer was tense. The young man rebelled against his parents, both of whom were members of the Communist Party. In their view he often displayed a lack of discipline – and his long hair was upsetting. Later, in a „talk" with his supervisor from the district authority of the East German police, the captain spoke negatively about his stepson and attributed his poor character to his biological father. This statement may have been an expression of his true feelings, but he may have feared that his family would be held responsible for the actions of his stepson.

After Rolf-Dieter Kabelitz quit his lathe operator apprenticeship at the state-owned locomotive plant „Karl Marx" in Potsdam-Babelsberg, his parents got him a job at the Warnow shipyard in Rostock in August 1969. But he chose not to adapt to the socialist work routine there and gave notice to leave his job on January 10, 1971. He wanted to find work near his hometown. This caused a fight with his stepfather that completely spoiled the family’s New Year’s celebration. The young man left his parent’s house early in the morning of January 4, 1971, saying he was going to Rostock to work the late shift there.

It is not known where Rolf-Dieter Kabelitz spent the next three days. On January 7 he took the S-Bahn to Oranienburg. [18] There was a lot of snow on the ground when he walked from the last stop on the S-Bahn line back along the tracks through Birkenwerder to Hohen Neuendorf, where the tracks curved toward the border grounds. In the darkness of the early evening he left the tracks and walked by Bergfelde toward the border. He set off a „signal device with firearm character" at 7:55 p.m. when he tried to pass the first barriers and the border guards were notified of his presence.

The 19-year-old continued in the direction of West Berlin. When he realized that the border guards were pursuing him with tracking dogs, Rolf-Dieter Kabelitz turned around and ran back towards the S-Bahn tracks. He dropped his bag containing a shirt, sweater, toiletry bag and other personal belongings so that he could run better. But his pursuers had no difficulty following his tracks in the snow. He tried to hide in the hilly grounds but one of the border guards found him standing behind a tree at 9:45 p.m. Although the fugitive was surrounded and was no longer moving towards the border but away from it, a lieutenant, supposedly after calling out, fired in his direction. Two bullets hit Rolf-Dieter Kabelitz in his pelvis and thigh and he collapsed to the ground.

He was in critical condition when he arrived at the Friedrich Wolf Hospital in Hennigsdorf. Once there, he was entrusted to the care of the doctors, but he remained under the control of the East German secret police.

Rolf-Dieter Kabelitz was physically and psychologically weakened from the loss of blood and shock that he had endured and was not totally conscious. Nonetheless, the East German secret police began to interrogate him right after he arrived at 2 a.m. The doctors reported that the patient was in a life-threatening condition due to a wound through his intestines, but the Stasi and the Oranienburg district court director W. were not deterred from appearing on January 9 to present an arrest warrant to the patient who had just been operated on and was sporadically unconscious. They conducted a judicial interrogation and took him into pre-trial confinement.

"He has been informed of his right to legal remedy," the district court director put on record in perfect form. [19] Rolf-Dieter Kabelitz was guarded by the Stasi in his hospital bed twenty-four hours a day. The hospital staff in Hennigsdorf was instructed not to permit any visitors and not to provide any information to his relatives or anyone else. [20] Rolf-Dieter Kabelitz repeatedly claimed to his interrogators and guards that he had not wanted to flee and that he had merely lost his way. One of his guards noted in his explanation that he had „hidden behind an embankment because he had heard dogs in front of him and could see the guards behind him. He had leaned against a tree when he heard someone behind him call, „Hey, guard, guard." He claims not to have heard a warning shot but only the double shots from the MPi [machine pistol] at which point his feet were torn out from under him." [21] East German secret police, however, did not believe his version of events.

An internal infection spread through his body over the following weeks, causing him a long and painful death. He had a fluctuating high fever and spoke deliriously. The East German secret police wrote everything down that he said in his sleep and under high fever. „The man under surveillance was in a kind of half sleep during our shift and had strong dreams," the guard noted on January 8. He wrote down the following statement: „A dog squatted in front of me and then a pain, and my legs were gone." [22] Does this note suggest what really happened? Kabelitz had been hiding when he was detected. It could be that he did not leave his hiding place as ordered by the border guard and was consequently guarded by a border or tracking attack dog and hence did not dare to move.

Rolf-Dieter Kabelitz was operated on twice. His condition stabilized for a few days but then deteriorated rapidly. On the morning of January 30, the doctors diagnosed pneumonia. By evening they predicted that he would not survive. Rolf-Dieter Kabelitz fell into a fevered delirium. He died at 11:50 that night in the Hennigsdorf Hospital as a consequence of his critical injuries. During the 23 days that he spent in the hospital he had not been allowed to see a single relative. His body was cremated and the ashes buried in an urn.

West Berlin was not aware of the incident at first. A lieutenant of the National People’s Army who later fled to the West informed the West Berlin police in September 1971 about the escape attempt of January 7, 1971, but claimed that the fugitive, whose name was unknown, had been arrested without the use of weapons and had remained uninjured. [23] In July 1991 the Central Investigating Agency for Governmental and Party Crimes opened an investigation. It could not be conclusively established whether Rolf-Dieter Kabelitz had entered the border grounds by mistake, as he had told the Stasi, or whether he had planned to escape. One of the two gunmen claimed to have fired into the air, which his fellow guard confirmed. The second gunman, the lieutenant that fired the shots at Kabelitz, had died in 1986. The Berlin public prosecutor dismissed the case against the perpetrators on August 15, 1994 without an arraignment. [24]