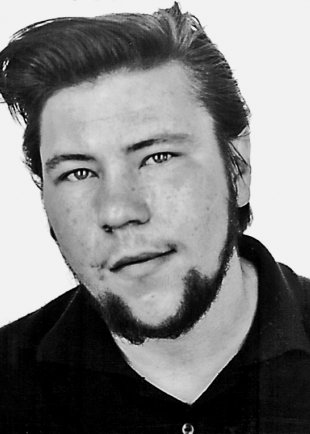 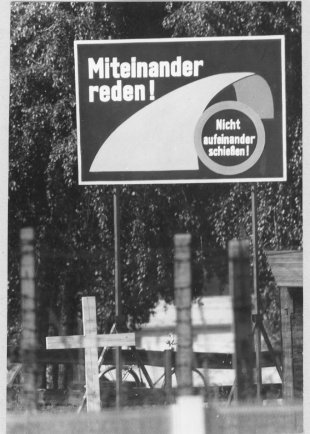 Werner Kühl was born on February 10, 1949 in West Berlin. He attended school until 1963 and then worked as a gardener for various companies. His parents were separated and his permanent address was registered with his father, but his mother looked after him. Werner Kühl led an unsettled life and was repeatedly unemployed and homeless. He met Bernd Langer, who was his same age, in a dormitory of a youth welfare agency in 1968-69. Bernd Langer was born in East Berlin, but in 1966 had been allowed to resettle in West Berlin, where his father lived, as part of the official East German policy to reunite families. But he soon yearned for East Berlin and wanted to go back to his grandmother’s, where he had grown up. As a child he had been in a motorcycle accident with his father and suffered ever since from an impaired consciousness and neural disease. [49] In July 1971 Werner Kühl and Bernd Langer were hired for a few days as transport workers and lived together in an inn.

They began to speak often about resettling in East Germany, where they thought they could have a better life. Later on, this explanation for their actions would earn them little sympathy, not in the West, and surprisingly, not in the East.

Werner Kühl: West Berlin police crime site photo [July 24, 1971] (Photo: Polizeihistorische Sammlung/Der Polizeipräsident in Berlin)
The two young men left the West Berlin hotel with their luggage on July 24, 1971. It was a warm Saturday. That afternoon they took the S-Bahn to Neukölln and walked to the Britzer Zweigkanal. It was warm and there was a bathing area there. Once they arrived at their destination, Kühl told his friend about what was perhaps his spontaneous plan to cross the border grounds to East Berlin there. Bernd Langer objected to the idea, insisting that it was much too dangerous and that they could simply use the border crossing at the Friedrichstrasse station or at Sonnenallee, which was close by, but Werner Kühl dismissed his doubts. He convinced him that his idea was possible, and his friend let himself be talked into it. [50] The two men crossed the small canal, camped out right next to the stretch metal fence of the border grounds and waited for it to get dark. 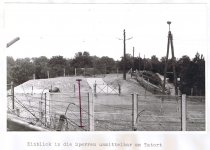 Werner Kühl: West Berlin police crime site photo of border grounds between Berlin-Neukölln and Berlin-Treptow [July 24, 1971] (Photo: Polizeihistorische Sammlung/Der Polizeipräsident in Berlin)
At 11:30 at night they threw their blankets over the metal fence to protect themselves from the sharp edges and climbed over it. They left most of their luggage on the west side. Then they ran towards East Berlin, towards the garden settlement "Gemütlichkeit III." A former East German policeman was sitting with his wife in a garden there and noticed the two West Berliners as they were crossing the security grounds. Dutifully, he walked through "Harmonie," the neighboring garden settlement, to the nearest watchtower and reported the incident. The guards soon found the two young men in the border strip and, believing them to be East German fugitives, shot at them. Bernd Langer, hit in the thigh, arm and shoulder, crawled back to the fence that he had just gotten past. Werner Kühl reached the border gate on the East Berlin side uninjured but was unable to open it. When he turned around and ran back in the direction from which he had come a bullet hit him in the shoulder, rupturing his pulmonary lung, feed pipe and two arteries before exiting on the other side. Bernd Langer saw Kühl "turn like a spiral" and collapse into the anti-vehicle trench. [51] He crawled back to his friend, gave him a shake, called out to him and then lay down next to him on the ground and waited. Werner Kühl bled to death within minutes.

A drunken first lieutenant of the border troops who had the evening off had watched everything from an acquaintance’s garden. Although he was not in uniform he intervened, employing the familiar commanding tone to quickly get the dead man and the injured man out of view of the West. Later he had to formally apologize for his violation of duty regulations. [52]

Policemen, customs officers and civilians on the west side watched as Werner Kühl’s body and the injured Bernd Langer were taken away. They assumed falsely that they were both East German fugitives and that the drunken officer in civilian dress was their third man. The dead body was brought to the People’s Police Hospital in Berlin-Mitte and a fire department ambulance brought Bernd Langer to the prison hospital of the East German secret police. The investigative division of the East Berlin Stasi district opened an investigation against him on July 24, 1971; two days later a warrant for his arrest was issued. [53]

Lieutenant General Peter, head of the East German border troops, attested in a letter to the Communist Party general secretary, Erich Honecker, that the two guards involved in the shooting had "acted tactically correct." They were soon awarded the "Medal for Exemplary Service at the Border." [54] In May 2000 one of the gunmen was sentenced as a youth to a year and two months probation for complicity in manslaughter; the other guard had already passed away. [55] It remained unclear who had shot how many bullets and with which weapon that night. Since investigators had failed to conduct a forensic analysis of the weapon and projectiles and did not examine Werner Kühl’s clothing at the time, it was difficult for the Berlin district court to determine the responsibility of each individual border soldier. Because the Communist Party leaders and functionaries had been given legally binding mild sentences, the court felt itself limited in its ability to "make the defendant understand the injustice of his actions through a criminal sentence." [56]

It was 1971 and the victims became a pawn in the Cold War conflict. Politics at the time were aimed at a policy of détente. The four major powers were struggling to agree on a treaty for Berlin and the two German states were engaged in negotiations to facilitate travel and visitor traffic between East Germany and West Berlin, as well as between East Germany and West Germany. The East German order to shoot fugitives at the border made the negotiations in West Germany very controversial. The Socialist-Liberal government coalition and the conservative CDU/CSU-opposition hotly debated the decision to engage in talks with the Communist Party leadership. A few weeks earlier Erich Honecker had succeeded Walter Ulbricht as Communist Party general secretary in East Germany; the new leader had been the architect of the Berlin Wall and called for a celebration of the 10th anniversary of the "anti-fascist protective wall." The dead man and his injured friend agitated both sides and were used as tools to manipulate the opponent.

Without conducting its own investigation, the West Berlin police released eyewitness reports to the press that claimed that a hail of bullets had prevented three East German citizens from escaping to the West. The information created a furor in the western media. The West German federal government and the West Berlin Senate protested the shooting. The American city commander pointed out that the "inhuman incident […] is in no way beneficial to the negotiations that are intended to improve the lives of people in Germany." [57]

ADN, the East German press agency, responded the same day in "Neues Deutschland": It clarified that the incident had not involved three East German fugitives, but that two West Berliners had been "injured" after engaging in a "severe provocation" at the border. The Communist Party newspaper did not mention the death of Werner Kühl and accused the "Springer Corporation’s West Berlin press of publishing reports contrary to the truth in order to heat up the mood of the people against any negotiations and efforts towards détente." [58] The West Berlin Senate promptly repudiated this version of the incident. [59] At the same time the West Berlin police requested by cable more information from the East German police about the two supposed West Berliners, but received no answer. After the international press also condemned East Germany for the shooting, the East German leadership, ten days after the border incident had occurred, decided to publicize a new explanation. It published the names and addresses of the two West Berliners. It also admitted for the first time that Werner Kühl was shot and killed and it attacked the West for encouraging a "massive hate campaign against East Germany" over what "Neues Deutschland" called a "border provocation." [60]

The West Berlin police felt compelled to withdraw their false version of the facts. An investigation of the personal data revealed that Werner Kühl was known to the criminal investigation department for various offenses, including stealing cars, defamation and joint theft. Bernd Langer had a police record for coercion and resistance; it was also known that he suffered from a neural disease. The West Berlin police released all this information to the press and, based on "additional information" that was not more narrowly specified, presented a new version of the incident: Werner Kühl and Bernd Langer had wanted to help a friend in East Berlin flee to the West. [61]

During this war of propaganda, the East German secret police quickly developed "a counter measure plan." It first planned to have Bernd Langer, who was a firsthand witness of the events, disappear in the psychiatric division of the Waldheim Hospital in a "special facility for people with secret information." [62] A feverish and creative effort was made to think up a justification for the deadly shots fired at the West Berliner. One suggestion was to claim that the telephone number of a "terrorist organization," – meaning the "Association for the Victims of Stalinism" – had been found on Kühl, but someone commented in the margins that this idea was "too heavy-handed." [63] They needed to "create more evidence suggesting a criminal invasion into the territory of East Germany." [64] The Stasi agents considered finding evidence to suggest that "Kühl had been carrying either a gun, dynamite or a detonator […]." [65]They also planned to find a legal basis for not having to "return the body." They cited "generally accepted issues of hygiene" that were set in the "Cremation Law of 10.8.1938" and still valid in East Germany. [66] In agreement with the East German general state prosecutor’s office, the Stasi finally decided to have Werner Kühl cremated "in order to prevent West Berlin from making a political demonstration of his body." [67]

Little remained of the other plans. In information provided to Erich Honecker, the Stasi came to the conclusion that "the two border violators are not particularly well suited for presentation to the public as major agitators." [68] They lacked real backers, such as a secret service or agent headquarters. Hence Honecker provided the solution in a handwritten note to the Stasi: "Bernd Langer should be deported to West Berlin if that is what he wants." [69]

Bernd Langer was released from pre-trial detention on August 30, 1971 and handed over to the West Berlin police at the Sandkrug Bridge border crossing by Wolfgang Vogel, the East Berlin attorney and confidant of Honecker. Bernd Langer soon clarified that there had been no fiancée or girlfriend in East Berlin and that he had nothing to do with an escape attempt or any group providing escape assistance, nor had he pursued any political motives. [70] Vogel also handed over the urn with Werner Kühl’s ashes along with his death certificate and identification card. [71]

The documents and papers found on Werner Kühl were kept in East Berlin as evidence since they had been "contaminated by the bullet wounds." To avoid contradicting the ADN report, a false death certificate was issued for Werner Kühl stating that he died on July 26, 1971 at 11:50 p.m. [72]

Werner Kühl’s family buried him in the St. Johannes Cemetery on the northern bank of the Plötzensee in Berlin-Wedding. 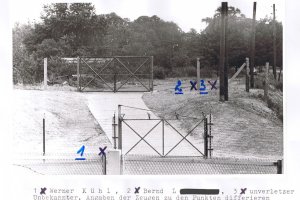 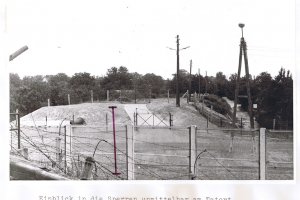