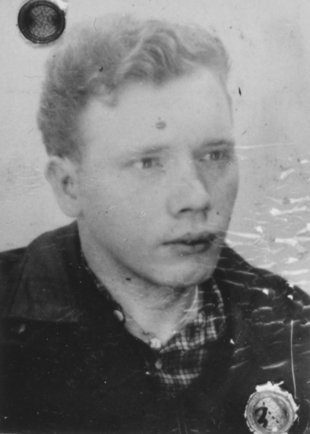 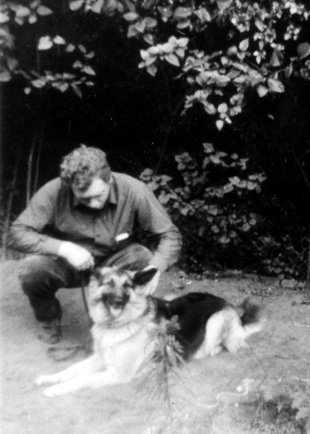 near the Brandenburg Gate
on the sector border between Berlin-Tiergarten and Berlin-Mitte
A month later, on October 2, Dieter Beilig climbed on top of the Berlin Wall at the Brandenburg Gate. It is not known whether his action that Saturday morning was supposed to be an expression of support or opposition to the "new east policies" pursued by the former mayor of Berlin. When he ran along the Wall, West Berlin policemen demanded that he get down.Dieter Beilig was born in Berlin and grew up in the western part of the city. He was 20 years old when the sector borders were sealed off in August 1961. Like so many West Berliners of his generation, he was not willing to passively accept that his city had been brutally divided. He went out onto the streets to protest against the East German border regime. His protest activities throughout the early 1960s repeatedly attracted attention in West Berlin. Only many years later did it become known that Dieter Beilig, a committed opponent of the Wall, had himself died at the Berlin Wall in October 1971. East Germany kept secret what had happened to Dieter Beilig after he climbed onto the Wall near the Brandenburg Gate on October 2, 1971.

Dieter Beilig, shot dead at the Berlin Wall: Personal photo (date of photo not known)Since childhood, Dieter Beilig had lived in the Kreuzberg district, which belonged to the American sector. He grew up under modest circumstances and never knew his father, who had fallen as a soldier in Second World War. His mother did not have an easy time raising her only child, but she always remained an important person in his life. [1] Her son quit a baker’s apprenticeship and later found work as an unskilled laborer at the federal printing office. He moved into an apartment on Köpenicker Strasse, near the Kreuzberg bank of the Spree River that bordered the East Berlin district of Friedrichshain. It was not far from the Oberbaum Bridge, which, until August 13, 1961 had been a busy crossing point between the East and the West. Dieter Beilig had probably personally experienced how border guards shot at fugitives here and he continually thought up new ways to express his outrage. On occasion he got into trouble with the West Berlin police. In July 1962, for example, he was arrested temporarily for throwing smoke bombs over the Wall. [2] A month later a picture of the red-headed, freckle-faced young man was published in a number of newspapers after he had participated in the front row of demonstrations that took place in August 1962, one year after the Wall had been built and Peter Fechter had been killed. He was carrying a large wooden cross bearing the inscription: „We condemn it." Later Beilig explained what had been meant by it: „I went through West Berlin on August 13, 1962 carrying a wooden cross that I placed at the site where Peter Fechter was murdered. After all it was murder. […] He had a right to be offered assistance. […] I did not break the law. I merely protested against this pointless murder. […] I am a worker and despise every form of totalitarian dictatorship, be it Hitler or the present one. I love freedom and human dignity." [3] 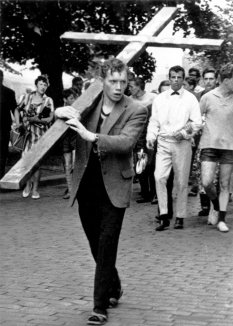 Dieter Beilig: Demonstration on the first anniversary of the Berlin Wall (photo: Aug. 13, 1962) (Photo: BStU, MfS, AU 5040/65, Bd. 1, Bild 9)
Dieter Beilig, shot dead at the Berlin Wall: Demonstration on the first anniversary of the Berlin Wall (photo: Aug. 13, 1962)The young West Berliner was sitting in an East German prison when he wrote these lines. He had fallen into the clutches of the Stasi in April 1964 under unknown circumstances. [4] At the time West Berliners believed that Dieter Beilig had been kidnapped and taken to East Berlin. [5] But Stasi files claim that he had driven to the Friedrichstrasse station border crossing in a drunken state on April 29, 1964, had identified himself at the passport control office and stated that he wanted to get into contact with the Stasi. [6] After his arrest Dieter Beilig was subjected to endless interrogations and remained in pre-trial detention for many months. In the end his anti-Wall activities led to his indictment by the East Berlin city court for „seditious propaganda and incitement" and for „seditious acts of violence." He was sentenced to twelve years in prison in December 1964. [7] In January 1965 he was serving time in the Brandenburg Penitentiary, sometimes in solitary confinement because he rebelled against the guard staff and was said to have been involved in escape plans. [8] After many weeks of uncertainty, his mother in West Berlin finally learned what had happened to him and hired an attorney. The political prisoner was redeemed by the Federal Republic of Germany in 1966 and released to the West by the East German authorities in September, well before his sentence had expired.

Dieter Beilig: Demonstration after Peter Fechter’s death (photo: Aug. 17, 1962) (Photo: BArch, VA-07/8461, o. P.)
Dieter Beilig moved back to Berlin-Kreuzberg after his release. He probably remained true to his political convictions even though he kept quiet after he was let out of prison. The mood in West Berlin had changed fundamentally during this time. A large part of the population began to view the continued division of the city as an unalterable reality and was supportive of Willy Brandt’s policy of détente. [9] One consequence of this political change was the Four Powers Treaty of September 1971. A month later, on October 2, Dieter Beilig climbed on top of the Berlin Wall at the Brandenburg Gate. It is not known whether his action that Saturday morning was supposed to be an expression of support or opposition to the „new east policies" pursued by the former mayor of Berlin. When he ran along the Wall, West Berlin policemen demanded that he get down. Instead, he jumped down to the other side of the Wall, unrecognized, while calling out „freedom for Germany, Willy is the greatest." [10]

The western observers were unable to see what happened next on East Berlin territory. According to border troop and Stasi reports, Dieter Beilig was immediately arrested and identified from his identity card. [11] In the 1970s, these kinds of incidents, regarded by East Germany as „illegal border crossings" and „enemy agitations" were not uncommon at prominent sites such as the Brandenburg Gate. [12] To avoid negative headlines, East Germany usually arrested the undesired intruder, conducted an interrogation and then sent him back to West Berlin without a fuss. After his arrest, Dieter Beilig was brought to the command point of the border troop regiment that was located in the Academy of Arts building on the nearby Pariser Platz. On the way there he tried to break free of his captors but was caught again. After arriving at the command post he was guarded by two border soldiers and forced to take a seat in a small room and wait. According to the border guards’ version of the events, he again tried to flee and was shot at close range without warning. The East German border troops reported that, at 9:43 a.m., the „border violator" attempted to flee through the window. „The head guard" reacted by „using his firearm" and „injured the person in his upper body with a bullet from his MPi." [13] Dieter Beilig probably died immediately. [14]

Given the large number of visitors to both sides of the Brandenburg Gate, the Stasi initially expected that it would be impossible to conceal the death. Nevertheless, to be on the safe side, the Stasi went to the trouble of making it look as if the guard had acted in self-defense. The Stasi file noted that after Dieter Beilig’s death, his fingerprints were put on the weapon to create „evidence" to make it look as if he had „wanted to disarm a member of the border troops, making the use of firearms necessary." [15] When it became clear that, besides the border guards involved in the incident, there had been no other eyewitnesses on either side of the Wall, the Stasi began efforts to completely conceal Dieter Beilig’s death from the public. They did not answer any requests for information from authorities and relatives in the western side of the city. A West Berlin attorney, hired by Dieter Beilig’s mother, tried in vain to contact the relevant offices in East Germany. Dieter Beilig’s mother died in 1988 without ever learning what had happened to her son. [16]

After the collapse of East Germany in 1989, the crime and its cover-up were discovered during the investigation of the man responsible for shooting him. But it turned out that the gunman, a former border troop officer, could not face trial because he had already passed away. [17] At the same time the law-enforcement authorities tried to open a preliminary investigation against eleven former members of the East German Ministry of State Security and judicial authority. They were charged with participating in an attempt to conceal the circumstances of Dieter Beilig’s death. Three former Stasi members were ultimately tried. The Berlin public prosecutor charged them, saying they had aided the gunman by creating false evidence. But in the main trial before the Berlin state court, the defendants refused to provide any information to clarify the circumstances of the manipulation. They were acquitted in June 1999 because the charge of accessory to the fact could not be sufficiently proven. [18]

Dieter Beilig’s fate became public in 2003 when the Academy of Arts was being refurbished. [19] Markings on the floor inside the re-opened building show the location of the border troop command post where he died. It is still not known where the Stasi buried Dieter Beilig’s human remains after his body was cremated at the Baumschulenweg Crematorium in Berlin-Treptow.