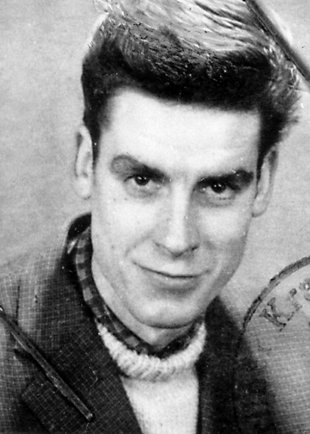 Manfred Weylandt, born on July 12, 1942 in Berlin, grew up with his mother and two sisters. He left school after seventh grade and eked out a living as an unskilled worker. He also served various prison sentences between 1957 and 1970 for different offenses. When he married a second time in the fall of 1970, he seemed to have gained a degree of stability in his life. After this he worked as an assistant stoker for a filter and gasification plant located right at the Berlin Wall near the Ostbahnhof station in the Friedrichshain district. He underwent training as a boiler attendant and an East German secret police report noted that "after this he attended to his work with discipline." [29] But in December 1972 the Friedrichshain city court sentenced him again to two years in prison "for theft to the detriment of Socialist property." [30] He expected to be arrested at any moment. A Stasi agent cited statements from his wife that he began drinking alcohol to counter his fear and taking pills for his insomnia. [31]

He received the news by mail on February 13, 1972 that he was to begin his sentence on March 1 at the Rummelsburg Penitentiary. Manfred Weylandt did not want to go back to prison. Over the last few months he had often spoken to his wife about escaping to the West and now this seemed the only option left to him. [32] He got into a fight with his wife on February 14 after he had spent the last of their money on alcohol and a guitar. Drunk, Manfred Weylandt stormed from their home in Berlin-Adlershof at 9:30 p.m. He was last seen in the state-run bar called "Gemütliche Ecke" (Cozy Corner) in Berlin-Friedrichshain at 10:30 p.m. He left with the words "I am planning something that the world can only dream of." [33]

He biked to the company where he worked. [34] When he got there he managed to reach the fence that blocked off the grounds from the border without his colleagues’ on the night shift noticing. He climbed onto the roof of a shack and slid down a heating pipe that landed him in a dog run within the border grounds, but no dog attacked. The East German secret police later found out that at that very moment the company staff was feeding the dogs. [35] Manfred Weylandt apparently knew that he did not have to worry about the dogs. He took off his jacket and scarf, and crossed the border grounds up to the bank wall of the Spree where he entered the ice cold water and began swimming towards West Berlin. Two border guards noticed him at around 11:30 at night, after he was halfway across the river. When he failed to respond to their shouts, they opened fire and shot from the hip at the fugitive until he disappeared from view. A bullet hit him in the back of his head and Manfred Weylandt sank into the Spree and drowned. [36] The search for him soon began, but the divers did not find his body near the Schilling Bridge until the next day. They were able to conceal the retrieval of his body by fastening the corpse to the bottom of the boat so that no one on the West Berlin riverbank could see it. Other distractions were also created to make it look like the "divers were searching for some objects." [37]

The gunmen were awarded the "merit award of the East German border troops" the very same day and a bonus of 150 marks. In their testimonies they later claimed that they were not informed about the fate of the fugitive. Twenty-one years later they were indicted by the Berlin district court for joint manslaughter and sentenced as youths to a year and ten months in prison, which was commuted to probation. [38]

Manfred Weylandt did not have any papers on him when he fled but the Stasi was able to identify him two days after his death from his finger prints. His wife, however, was not informed about his whereabouts. The Stasi agents first wanted to find out who knew about his plans to flee so that his death could be kept as secret as possible. They intended to fabricate a different version of his death. Initially, the wife was only to be informed that "her dead husband was retrieved from Berlin waters." [39] The conditions for concealing the truth appeared propitious Although people on the West Berlin side had heard the shots, all they had seen was a patrol boat searching the Spree.

Manfred Weylandt’s wife reported her husband’s absence to the East German police on February 15, 1972. Her missing persons’ report was not registered for another six days. She looked for her husband at various hospitals and prisons without success and became increasingly worried that he may have followed through on his occasionally expressed thoughts about committing suicide because he feared his impending imprisonment. [40] His relatives waited in uncertainty for many weeks. The East German secret police used the time to investigate his circle of friends and acquaintances, as well as his work place and close relatives. Meanwhile they had Manfred Weylandt’s body cremated at the Baumschulenweg Crematorium on March 13, 1972. At that point they were certain that neither his friends nor colleagues at work had learned the reason for his disappearance. [41]

The following day the widow was informed that the body of her husband had been pulled out of the Spree near the Museum Island and that he had already been cremated at public expense. The death certificate noted the time of death as February 15, 1972, 5:30 p.m., which is when the autopsy was conducted. Although she was not told how he died, according to a Stasi report, the widow appeared calm when she received the news from the East German secret police. [42] She probably felt confirmed in her suspicion that her husband may have taken his own life. The family did not find out the truth for another twenty years.

The urn containing Manfred Weylandt’s ashes was buried in the East Berlin Baumschulenweg cemetery on March 21, 1972. His relatives were not present at the funeral.