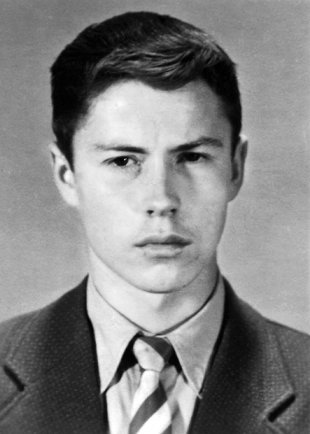 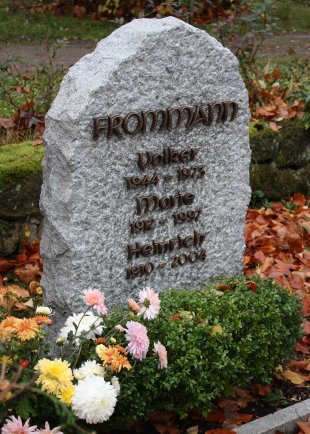 died from his wounds on March 5, 1973
On March 1, 1973 at about 12:45 in the morning, Volker Frommann jumped out of a moving S-Bahn train in East Berlin about 50 meters away from the border territory between the Pankow and Schönhauser Allee S-Bahn stations. He probably had wanted to use this passage near the border to escape to West Berlin.Volker Frommann was born on April 23, 1944 in Unterpörlitz, Thuringia, not far from Ilmenau. [1] He was the only child of Marie and Heinrich Frommann. The father was a metalworker and worked as a production manager in the state-owned machine and appliance manufacturer in Langewiesen. The mother worked from her home for a doll factory. Volker Frommann grew up with his cousin in his parents` home, which they shared with his uncle. He attended school in Unterpörlitz from 1950 to 1958. Because of his good grades he switched to the middle school in Ilmenau, from which he graduated in the summer of 1960. He was supposed to begin training at the state-owned cooling system plant in Scharfenstein/Erzgebirge on September 1, 1960. 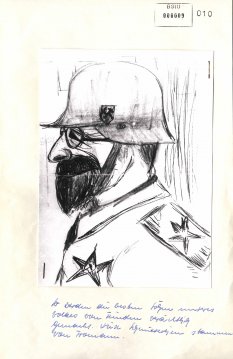 Volker Frommann: caricature of Walter Ulbricht drawn by Volker Frommann and confiscated by the Stasi (drawing: ca. 1960) (Photo: BStU, MfS, BV Shl, AU 66/60, Bd. 3, Bl.9)
Volker Frommann’s best friend in those years was Rainer Michelidse and they spent most of their time together. Rainer’s father had been the target of a denunciation in 1945. He was picked up by the Soviet secret service and interned in the Buchenwald special camp without ever receiving a sentence. The family lost all trace of him after that. Both boys were active in the Protestant youth congregation in their hometown. They were critical of the FDJ, the official youth organization in East Germany, and of the direction that East Germany was going. Neither of them trusted what they learned from the East German media and preferred to listen to western radio programs for information, as well as for the music. In 1959 both boys traveled the long 300 kilometers to East Berlin so that they could secretly visit West Berlin, which they liked better than their hometown with all its political constrictions.

On the first days of April 1960, the Unterpörlitz community was officially declared a „fully collectivized village" even though the village only had three farmers who lived entirely off the land. Farming for most of the residents was only a secondary income. But the local Communist Party regarded the successful farm collectivization as reason enough for a celebration in „Zur Sonne" and „Henne," the village’s local restaurants. Volker Frommann and Rainer Michelidse were convinced that the farmers had only joined the agriculture production collective under pressure since it, in fact, had dispossessed them of their property. This is what led them to want to commit a symbolic act: When the evening party reached its climax, they left the inn unnoticed and threw an iron cow chain over the Unterpörlitz power line, causing a short circuit that left the LPG celebration in the dark. They quickly returned to the party and joined the others who, sitting in candlelight, complained about the blackout. Despite the Stasi’s vigorous efforts and intense investigations, it took months for the culprits to be discovered. Finally in August 1960, the Stasi put its sights on the two boys, who were arrested on August 11, 1960.

Defenseless and at the mercy of the Stasi interrogation methods, the two 16-year-olds were played against each other and forced to „confess." On November 17, 1960, the Suhl district court sentenced them as adults to three years in prison for „seditious acts of violence." In addition they were found guilty of „stealing corporative property" – they had taken cans of pineapples from the storage room of the local cultural center – and were sentenced to an additional six months in prison. [2] The court did not accept Volker Frommann’s father’s view that it had been a mere youth prank. Nor did it consider that the entire damage caused amounted to no more than 320 East German marks. The „acts of violence" committed by the defendants, the court wrote in its verdict, represented „active support of reactionary forces of the German people." This kind of behavior was capable „not only of disrupting our development but also of supporting the advancement of an atomic war against the peace-loving human race since every reinforcement of the war camp helps to bolster these criminal aims." [3]

After spending almost four months in a Stasi pre-trial prison in Suhl, Volker Frommann and Rainer Michelidse were moved for a short time to prisons in Untermassfeld and Halle before being transferred on December 16, 1960 to the „Torgau Youth House," a prison exclusively for youths. [4] „I have been informed," Volker Frommann was required to confirm in writing upon arrival there, „that I am not allowed to look out the window, wave or call out and will be held responsible if I violate these rules." [5] The 16-year-old soon learned what „being held responsible" meant in this prison: When he requested a Bible he was placed in confinement for hours in a basement cell. [6] A prison director’s „behavior report" on the young prisoner stated that Volker Frommann was of the view „that a number of conventions in the youth house and directives from his superiors were not reconcilable with his beliefs" and he engaged in „very many discussions." The report did not mention the prison cell punishment. [7] Like many of his fellow prisoners – including Michael Gartenschläger [8] – after serving three months in prison, Volker Frommann was appointed to prison „training" as a metalworker. In the prison library he preferred to read classical literature. He was artistically inclined, painted and drew pictures, and joined a circle of inmates with similar interests. He seemed to have let go of his initial open resistance: „Negative attitudes towards our state do not find expression in his discussions as one may have expected given the beginning of his stay here," the prison director noted in July 1962. He consequently labeled him one of the „positive youths" in the prison who could be considered for a „conditional sentence waiver." [9] After serving a total of two years in prison, Volker Frommann and Rainer Michelidse were both granted amnesty and released from the Torgau Youth Prison on August 10, 1962 with a three year probation term. [10]

After returning to Unterpörlitz, Volker Frommann resumed the metalwork training that he had begun in the state-owned glass machine construction plant in Ilmenau. But he was not particularly happy with his work. The year after his release from prison he attempted to escape from East Germany but was arrested in Czechoslovakia and handed over to East German authorities. He was again sentenced to a prison term that he served until 1964 in the Untermassfeld Penitentiary.

Volker Frommann’s further development can only be briefly described. He worked as a metal fitter and later got a position at a glass painting company but neither job satisfied him. „After working for two years at my factory, it is pretty normal to go nuts, don’t you think so too?" he wrote to his friend Rainer Michelidse, who had moved away from Unterpörlitz by then. „The normal daily routine, the humdrum – that was not his world," his cousin later recalled. [11] In his letters to Rainer Michelidse, Volker Frommann wrote about the philosophical works he read after work: He wrote of Schopenhauer and Nietzsche, whom he apparently admired, and said that he was investigating their connection to Strindberg, Freud and Kierkegaard. He also kept Rainer Michelidse up to date on his newly discovered sources of knowledge, including Lessing, Kant and Plato. [12] His attempt to study theology at the university failed and the Dresden Art School also rejected him. [13] Anyone with cadre files and police reports accusing them of „seditious acts" and attempted „flight from the republic" was going to have a hard time professionally in East Germany.

Both his work situation and the psychological effects of his imprisonment were increasingly taking their toll on Volker Frommann. He sought psychological treatment and learned how to do autogenic training. He wrote to Rainer Michelidse: „I have made great progress again: I am able to disconnect better than before and am even better at keeping quiet." [14]

Volker Frommann got married to a doctor in the second half of the 1960s and moved away from Unterpörlitz for a few years with his wife, but they returned together at the beginning of the 1970s. The couple lived a secluded life; Volker Frommann and Rainer Michelidse lost touch and his contact with his cousin also became rare. Neither his friend nor his cousin knew what had led Volker Frommann to once again try to escape in 1973.

On March 1, 1973 at about 12:45 in the morning, Volker Frommann jumped out of a moving S-Bahn train in East Berlin about 50 meters away from the border territory between the Pankow and Schönhauser Allee S-Bahn stations. He probably had wanted to use this passage near the border to escape to West Berlin. But he was badly injured when he jumped and remained motionless on the ground near the tracks. Unable to speak, he was seen by an East German police patrol and brought to the Berlin-Friedrichshain Hospital by ambulance. [15] The first examinations determined that he had injured his spine and that his life was in acute danger. He died from his injuries on March 5, 1973. [16]

The relatives in Unterpörlitz learned from a nurse in the Friedrichshain Hospital who had attended the same nursing school as Volker Frommann’s wife and his cousin’s wife that he had been found seriously injured not far from the Wall. [17] His parents traveled to East Berlin to attend the memorial service in the Baumschulenweg Crematorium. His father was able to bribe the cemetery attendant and get him to open the coffin one last time for the parents so that they could bid their son farewell before his body was cremated. [18]

Volker Frommann was buried on the cemetery in Unterpörlitz, in a gravesite that he now shares with his parents.

In the early 1990s the parents tried in vain to find out more about the exact circumstances of their son’s death.