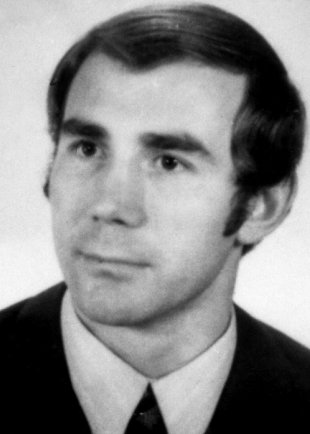 close to the Reichstag building
at the sector border between Berlin-Mitte and Berlin-Tiergarten
The guards in both towers were notified through the border communication system that a fugitive had entered the grounds. As soon as he was in shooting range, both guards in the "Schallplatte" watchtower began firing at Manfred Gertzki from close range.Manfred Gertzki, born on May 17, 1942 in Danzig, lost his father and brother during the Second World War. His mother fled with him to Eisenach in 1945; they later settled in Chemnitz - known as Karl-Marx-Stadt from 1953 to 1990 - where Manfred Gertzki trained to become a sheet metal worker. [1] After completing his military service with the air force of the National People’s Army, he continued his education by studying mechanical engineering. He received a position at Robotron, a state-owned research center in Karl-Marx-Stadt and in 1972 went to night school at the city’s technical college, where he earned good grades and from which he graduated as an engineer. He was also a track and field athlete and between 1967 and 1973 won a number of prizes in the discus and shot put in district championship competitions.

After his mother died in 1967 his only remaining close relatives lived in West Germany. Why and when he decided to begin a new life there is not known, but he planned his escape meticulously and even sent some of his personal belongings to the West in advance of his escape. When he fled he had his most important documents with him in a briefcase.

Manfred Gertzki made himself a bullet-proof vest by riveting two-millimeter thick metal plates into an oilcloth which he sewed into his jacket. He fastened a steel face mask that could be raised and lowered to a motorcycle helmet. The athletic engineer was carrying 50 kilograms of equipment on him when he escaped and was confident that it would protect him from any bullets.

Manfred Gertzki: Escape route along the Spree riverbank [MfS photo: April 27, 1973] (Photo: BStU, MfS, AS 754/70, Bd. 18, Nr. 1, Bl. 35)
Wearing his protection equipment, he entered the border area very close to the Reichstag building in the early evening of April 27, 1973. [2] At the time the Spree Canal was being enlarged and the border grounds were temporarily under construction. Using a steel pole, Manfred Gertzki broke the lock on the interior fence gate and, using the embankment for cover, was able to walk along the riverbank to an area very close to the Wall, which was stretch metal fence here. He was able to climb over the fence from the water side but there was a section of a few meters in which he could be viewed from the „Schallplatte" (record) watchtower located just a few meters away. (The watchtower’s name referred to the state-owned German record company that used to be housed in the former palace of the Reich President). He was aware of this momentary vulnerability but was convinced that his self-made equipment would guard against any threat it posed. He probably had not calculated that another observation tower, located about 300 meters away at Kronprinzen Bridge at the corner of Reinhardtstrasse on the other side of the Spree River, would play such a decisive role in his escape.

The guards in both towers were notified through the border communication system that a fugitive had entered the grounds. As soon as he was in shooting range, both guards in the „Schallplatte" watchtower began firing at Manfred Gertzki from close range. He fell or dropped to the ground, apparently hit, but he continued to crawl forward and was able to get over the stretch metal fence, the next to last obstacle from the water side. Bullets continued to fly at him, but this time they came from the guard tower on the other side of the riverbank, three hundred meters away. Manfred Gertzki had only two more meters to go before he reached the last metal fence that would have been easy to climb. Had he made it there he would have reached the West Berlin demarcation line; instead he was hit by a bullet and collapsed at the edge of the bank. He remained motionless.

The gunshots did not go unnoticed in and around the Reichstag. Passersby, British officers and West Berlin police had gathered on the Spree bank very close to where the shooting had taken place. [3] The crowd freely vented its disgust, shouting insults at the border soldiers, but no one dared to intervene.

Manfred Gertzki: Place of death directly at the border fence to West-Berlin [MfS photo, April 27, 1973] (Photo: BStU, MfS, AS 754/70, Bd. 18, Nr. 1, Bl. 39)
In light of the growing crowd of spectators, the East German border guards tried to remove the fugitive as quickly as possible. A first lieutenant tried unsuccessfully to pull him out of the „upstream territory." The crew of a customs boat from the nearby Marschall Bridge border crossing tried to secure the boat near the crime site in order to pull Manfred Gertzki aboard but was unsuccessful because there was no place to dock the boat and the current was strong. „Just throw him into the water," the boat crew called out to the first lieutenant, who had neither examined nor offered first aid to the young man who had been gunned down. [4] According to a Stasi report the border guard did, in fact, push the fugitive into the Spree to prevent „West Berlin individuals or people in uniform from retrieving the perpetrator." The weight of his steel equipment quickly pulled Manfred Gertzki down to the bottom of the waterway. [5]

About two hours later, at 7:40 p.m., East German fire department divers succeeded in retrieving Manfred Gertzki’s body from the water. In order to prevent West Berlin spectators and, more importantly, press reporters from seeing and photographing the dead man, he was fastened with a rope to the outboard side of the boat and dragged away in the water.

The following day the headlines of the western press were dominated by the „murder at the Reichstag." „Visitors to Berlin witnessed the crime at the Reichstag," announced „Die Welt" newspaper, adding that the shot fugitive „was hauled off by a guard boat like an animal cadaver." [6] The incident was also reported on radio and television, which, unlike newspaper reports, also reached an audience in the East. [7] This negative attention was very untimely for the Communist Party leaders who were preparing for the World Youth Festival, which was to begin in just a few weeks. They also knew that more reports would follow after the dead man was identified.

After a time the East German secret police registered with relief that nobody in East Germany seemed to miss Manfred Gertzki and this provided the opportunity to keep his name secret. Two weeks after his death the Stasi decided that „the corpse of border agitator Gertzki" should be registered as an „unknown person" at all the official agencies. The case was closed. [8]

Under Stasi direction, the registry office of the Berlin-Mitte district issued a false death certificate on May 14, 1973 for an „unknown man, approx. 25-30 years old." [9] The „municipal burial agency" and the Baumschulenweg Crematorium were also manipulated: Manfred Gertzki was placed in a coffin and cremated as the „unknown dead man" in the Baumschulenweg Crematorium on May 15, 1973. He was buried anonymously at the urn grove of the crematorium. [10] At the same time the Stasi in Karl-Marx-Stadt secretly searched his apartment and confiscated everything that could shed light on his escape plan. The Stasi also had his company make a missing persons’ report in mid-May. The report allowed the East German police, under the direction of the Stasi, to open an investigation against the killed man for illegally leaving East Germany, to issue an arrest warrant and officially declare him „wanted." The investigation also provided the legal foundation for clearing out his apartment, after which the proceeds were deposited in the national budget. Manfred Gertzki’s mail was read until the end of 1973. In February 1974 the Stasi concluded with satisfaction that all official examinations led to the conclusion that „that no other people had knowledge of the occurrence." [11]

In the fall of 1997, more than 24 years after Manfred Gertzki was shot, the three gunmen, who had been commended and distinguished for their actions, were tried before a court, but the body of evidence against them was complicated. Since an autopsy had not been conducted in 1973, it remained unclear whether Manfred Gertzki had „died as a consequence of the bullet wounds he suffered or whether he had drowned." [12] It could not be sufficiently proven that the two border guards stationed at the „Schallplatte" watchtower, who had shot Manfred Gertzki at close range, had engaged in illegal conduct. Consequently, they had to be acquitted. The court accepted, to their advantage, their claim that they had shot without the intention to kill and that either both of them had missed him or only one had hit him. Only the 19-year-old border guard who had shot from the Reinhardtstrasse watchtower from a distance of 300 meters was found guilty of second-degree manslaughter and sentenced as a youth to a one-year prison sentence that was commuted to probation.

Interestingly, the East German secret police had erred in its presumption that no one knew of the „occurrence." Before embarking on his escape, Manfred Gertzki had confided to a friend all the details of his plan, thus thwarting the Stasi aim of having him anonymously disappear without a trace. Although Manfred Gertzki had been certain that his protective equipment would make his death impossible, he was well aware that his escape could fail and that he might be arrested. He wrote a letter to his relatives in the Ruhr two days before he fled and deposited it with his friend, instructing him to send the letter to them four weeks after his escape attempt if he had not heard from him by then. Gertzki’s letter reached his uncle and aunt in West Germany in early July 1973. „Since I have taken the necessary measures to protect myself against guns," the dead nephew had written, „it is unlikely that I will endure any serious injury or worse." [13] The next day they received an anonymous letter from the friend, who to this day has remained unidentified, in which he stated, „Manfred is no longer among the living." [14]