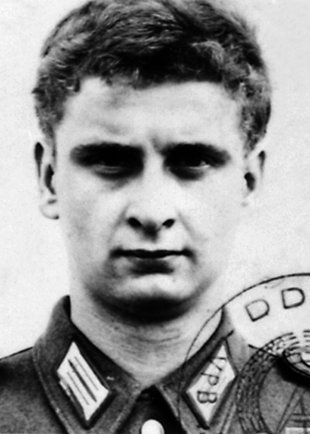 on the Friedrich-/Zimmerstrasse border crossing ("Checkpoint Charlie")
on the sector border between Berlin-Mitte and Berlin-Kreuzberg
Burkhard Niering appeared at "Checkpoint Charlie" at 7:35 p.m. wearing a winter battle uniform, a fur hat, boots and a machine pistol in firing position. A U.S. Allied vehicle had just entered the control area. When the East German officer returned to the guard house he suddenly found Niering standing before him.Burkhard Niering was born on September 1, 1950 in Halle an der Saale. He was eight years old when his parents were divorced, after which he grew up with his mother, who soon remarried. He left school early, in 1966, when he was in the 9th grade. The East German secret police noted in a report that he quit due to a "lack of interest in learning." He instead trained to become a plumber and installer. [1] The Stasi blamed the "negative influence of his parents’ home" for his complete lack of participation in "social activities." He did not join the "Ernst Thälmann" pioneer organization or the "FDJ," the East German children and youth organizations.

In May 1973 he was conscripted to do his military service with the East German police. After completing his basic military training he served in the mobile squad of the 19th Unit of the East German police, which was stationed in Basdorf, a village north of Berlin. A Stasi informant reported that he regarded his military service as a "meaningless waste of his youth" and increasingly found it to be a torment. [2] His supervisors described him as unobtrusive and very fit for service and he received two distinctions. His noted leisure activities focused on literature and theater. He supposedly confided to a soldier in his barrack that he would leave East Germany at the first opportunity offered to him.

Burkhard Niering spent his Christmas leave in 1973 with his mother and step-father and when he returned to his military barrack he seemed noticeably different to his barrack comrades. He avoided conversation and appeared depressed. A Stasi report mentioned a letter to his biological father dated December 30, 1973 in which he wrote "that after his leave he had become very aware of his situation and that he was concerned with the psychological problems of men in uniform, its synchronizing effect on people" and the repression of the individual that it entailed. [3]

On the evening of January 5, 1974, Burkhard Niering was assigned to guard his barrack alone from 6:40 p.m. to 8:20 p.m. This provided him with the opportunity of leaving the guard area unnoticed with his weapon and to enter the Friedrichstrasse border crossing ("Checkpoint Charlie) at 7:35 p.m. The East German secret police later pondered how he was able to get from Basdorf to the city center so quickly. Public transportation would have taken much longer and Burkhard Niering did not have his own car. His personal food voucher was found on highway F 109, which led to the theory that he had hitched a ride. But it seems unlikely that he would have left his escape to chance and he probably had arranged for someone in the area to pick him up.

Burkhard Niering appeared at "Checkpoint Charlie" at 7:35 p.m. wearing a winter battle uniform, a fur hat, boots and a machine pistol in firing position. A U.S. Allied vehicle had just entered the control area. When the East German officer returned to the guard house he suddenly found Niering standing before him. According to the staff sergeant, who belonged to the passport control unit of the East German secret police, he was given the orders "Follow…!" and "Hands up, forward march!" [4] When the sergeant was slow to obey, Burkhard Niering fired a shot in the air. Then he pushed the sergeant in front of him through the control area towards West Berlin. By this time other passport officers had been alerted, and they had closed off the pedestrian entrance and taken position with their guns unlocked. One of them shot at Niering from behind but missed him. He then ordered his hostage to move "on the double," underscoring his words with another shot in the air.

A slalom path began about halfway into the 150 meters of border crossing he had to cover. The kidnapped passport officer looked around continuously and intentionally moved slowly. According to his own account, he asked Niering "What is it you want? Do you have any demands?" He said Niering’s response was: "I want to get over there, you ox." [5] The barrier of the exit post was down and the guards, waiting for Niering and his hostage, were ready to shoot. "Guns down, guns down, get down," the fugitive was said to have screamed. The guards lay down but kept their guns in ready position. The hostage gave a nod to a guard who was hidden, trying to give him a signal to shoot. "Climb under," the fugitive ordered when they reached the barrier. The hostage dropped down at lightning speed and rolled to the side at the very same moment that two border guards fired at Niering from a covered position. He was hit in the loin and dropped to the ground. The guards quickly carried him to the watchtower to remove him from public view. This operation took no more than three minutes. A short time later an ambulance took him to the People’s Police Hospital where he died from his injuries shortly after 9 p.m. A Stasi surveillance camera had recorded Burkhard Niering’s escape attempt and the Stasi later used the film as training material. [6] The Stasi passport officers involved in the incident were awarded combat medals for "service to the people and fatherland."

A West Berlin customs officer and two U.S. soldiers who had just returned from a visit to East Berlin were witnesses to the events. The West German federal government, the Berlin Senate and the Allied city commanders sharply condemned the conduct of the East German guards. The U.S. city commander referred to an "extremely unfortunate start to a new year in which people all over the world had been hoping for an easing of tensions." [7] The CDU party demanded that the incident be addressed in the United Nations, to which both German states had been accepted as members on September 18, 1973. [8]

In early January 1991 Burkhard Niering’s mother issued criminal charges against Erich Honecker and Erich Mielke and against the guards for inciting and committing murder to the Halle district court. The Berlin public prosecutor’s office opened an investigation against the gunmen in September 1997. But in its verdict it noted that unlike the deaths at the Wall during which defenseless fugitives were shot at, in this case the violence had stemmed from Burkhard Niering. Hostage-taking and deserting the military are also punishable acts in the Federal Republic of Germany hence, even according to West German law, the gunmen would have been justified in arresting the fugitive and using their weapons. [9]

In the charges she filed in 1991, the mother argued that "to appeal to valid laws in an unconstitutional state is not right. The acts of these men were based on a disrespect for human dignity, a greed for power, unscrupulousness and a total lack of pity for young people and their families. It would be an act of justice were the guilty to receive a just punishment." [10]

But Burkhard Niering and his family were denied this justice, at least from a legal perspective.