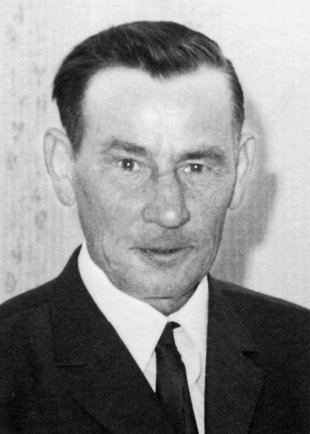 near the Hornkleepfad in Altglienicke
on the sector border between Berlin-Treptow und Berlin-Neukölln
Johannes Sprenger was 60 to 80 meters away from the tower when the head guard ordered: “Shoot!” Without firing a warning shot, the guard fired five consecutive shots. Hit in the head and neck, Johannes Sprenger fell to the ground.Johannes Sprenger, born on December 3, 1905 in Greifenhagen, Pomerania, which today is Gryfino, Poland, was 68 years old when he was shot and killed by a border soldier on the night of May 9, 1974. At the time this father of nine children was living with his second wife in Lüttenhagen/Weitendorf in the Neustrelitz district. [1] Although he already received a pension, the trained street construction worker continued to work in Weitendorf as a cooperative worker in the farm division of the Dolgen cooperative. He had joined the KPD (Communist Party of Germany) before 1945 and was also active in the Communist Party of East Germany. Since his retirement in 1970 he had belonged to the community council of his hometown. In 1974 he again campaigned as a candidate of the National Front in the local elections and was elected on May 19, nine days after his death, a fact of which only the East German secret police were aware.

No one in Johannes Sprenger’s village knew that he had lung cancer, and even he had not been given a clear diagnosis from the doctors. But by April 1974 he seemed to have noticed that his condition was serious. The 68-year-old man was transferred to a special clinic in Berlin-Buch but the doctors there chose not to operate on him because of his advanced age. Instead, they treated him with medication and radiation. [2] During a visit to his hometown three days before he died, he mentioned to his wife that he was going to return in a coffin, but he did not provide more details about his condition. [3]

On the afternoon of May 9, 1974, Johannes Sprenger visited the nearby state-run bar “Schlosskrug” with two other patients from the Buch clinic. He left the pub at around 7:30 p.m. explaining that he had to go to the bathroom and wanted to buy cigarettes at the bar. His acquaintances waited a while for him to return, but when he never came back, they went back to the clinic without him. Johannes Sprenger disappeared for five hours. When he reappeared he was at the other end of the city in the border territory between Altglienicke and West Berlin.

What happened to Johannes Sprenger during these five hours remains a mystery. Neither in 1974 nor later did anyone look for witnesses who may have had contact with him. How did the man from northern Berlin-Buch get to a border territory on the southeastern edge of the city thirty kilometers away? According to East German documents, no S-Bahn tickets were found on his person. And why did he go to the border? He did not have to flee in order to get to the West. As a retired person he was free to travel to West Germany and to West Berlin. He had already taken advantage of this privilege twice: once in 1970 and again in 1972; he had even visited his son who lived in West Germany. In 2000, when the Berlin state court was searching for an explanation, it concluded that it was most likely that Johannes Sprenger was not intending to flee but had perhaps entered the border territory to “put an end to his life through the border soldiers’ predictable use of fire arms.” [4] With this theory the court adopted the Stasi’s own speculation that Johannes Sprenger had acted in a “depressive state” and had expected “firearms to be employed.” [5] There is, however, no proof for this theory and there are considerable indications to suggest that it is false: Why would a depressive, seriously ill man, if he indeed had wanted to put an end to his life, go to such pains to do so? How Johannes Sprenger got to the border territory in Altglienicke and what motivated him to do so remains a mystery, but even more puzzling is how a physically weakened man was able to climb over the interior fence and enter the death strip.

Just after midnight, at 12:40 a.m., the border soldiers on duty on the “Entenfarm” (duck farm) watchtower noticed a man moving toward them between the interior fence and signal fence, “without making any attempt to get past any other border security obstacles.” [6] According to the border soldiers on duty, when he walked through a beam of light from a border lamp, they called out to him from the watchtower, but he continued to walk towards them. [7] Johannes Sprenger was 60 to 80 meters away from the tower when the head guard ordered: “Shoot!” Without firing a warning shot, the guard fired five consecutive shots. Hit in the head and neck, Johannes Sprenger fell to the ground. [8]

Although the border soldiers could have easily arrested the 68-year-old man without employing violence, the guard and guard leader were awarded the merit badge of the border troops for their “advantageous” and “determined” action. [9]

A quarter of a century later the Berlin district court sentenced both men for joint manslaughter to a nine month prison sentence commuted to probation. The court accepted the head guard and gunman’s claim that they had not wanted to kill Johannes Sprenger. [10]

With the exception of the border guards, no one on West and East Berlin sides appeared to have noticed the shooting that night. The East German secret police saw this as a chance to conceal the circumstances of Johannes Sprenger’s death and create a new “legend.” A report to the Stasi chief minister, Mielke, explained that the intention of the alibi was to prevent “rumors from being spread by his relatives living in the BRD or by the people in the neighborhood; uncontrolled opinions could reach the western mass media and be used to instigate a hate campaign against the German Democratic Republic.” [11] For reasons that had nothing to do with this incident, the political climate between the West Germany and East Germany had reached an all time low in May 1974. The Stasi had succeeded in getting Günter Guillaume, an East German spy, to infiltrate the Bonn federal chancellery. His discovery and arrest in late April strongly influenced Chancellor Willy Brandt’s decision to step down from office. The East German leaders apparently feared that news of a shooting at the Wall would only further discredit East Germany. The border troop doctor on duty established that Johannes Sprenger was dead and accompanied him to the People’s Police Hospital. The Stasi took charge of his body from there and, although he had his personal identification on him, he was “stored” as an “unidentified man” in the forensic institute of Humboldt University. [12] An autopsy was not done in order to limit the number of people who knew about the incident. An investigation of the dead man and his family was conducted and an order issued to have their mail checked.

Nine days after Johannes Sprenger was killed, Stasi men, dressed in the uniform of the East German police, informed his wife and a son that he had disappeared from the clinic on May 19, 1974 - the day of the local elections.

They questioned the relatives about his whereabouts, expressing mock concern and promising to undertake “search measures” to find him. [13] That day Johannes Sprenger was re-elected to the community council of Lüttenhagen/Weitendorf and the East German authorities acted as if he were still alive.

When one of his sons mentioned to the men disguised as “East German policemen” that their father had often expressed thoughts of suicide because of his poor health, the East German secret police changed their strategy. Until then the plan had been to simply have Johannes Sprenger disappear and buried anonymously without informing his family, but now they decided to pretend that they had found him drunk in an irrigation field or shot by his own hand. In the end, the “fabricators” of the Stasi decided on a third method of death: Disguised as criminal investigators, the Stasi agents informed the family that Johannes Sprenger had been found “strangled” in an area of woods near the Buch clinic on May 20, 1974. A “clear case of suicide,” they said. [14] The family was shocked. Claiming that the corpse was strongly decayed due to exposure to the weather and because it had been lying on the ground for so long, it was not recommended that the body be transferred to the hometown. The Stasi convinced the family to agree to a cremation and to refrain from viewing the dead man. [15] A death certificate signed by a doctor from the forensic institute of Humboldt University and dated May 20 -- not the true date of his death -- noted the cause of death as a “clear bullet wound.” [16] It was never given to the family.

A few days later the urn arrived by mail in Weitendorf; the LPG chairman brought it to the family’s home. [17] Johannes Sprenger was buried on June 1, 1974 in his hometown amidst many condolences. The mourners believed he had died from a tragic suicide. His wife doubted the suicide version of his death her entire life. But the truth of how Johannes Sprenger died did not come to light until 1997, two years after his wife had passed away, when the guards who shot him were brought to trial.