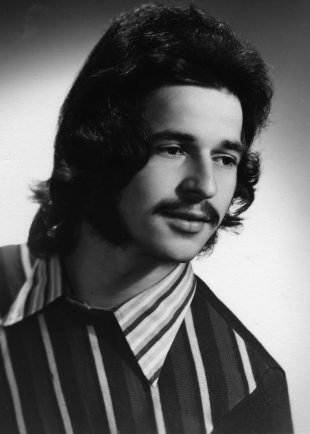 on Zimmerstrasse/at the corner of Otto-Grotewohl-Strasse
on the sector border between Berlin-Mitte and Berlin-Kreuzberg
By 9:45 p.m. he had gotten past a two-meter-high metal fence and the interior wall. As he tried to approach the last obstacle - the border wall to West Berlin - he touched a signal fence and triggered an optical and acoustic alarm. A border guard on the nearby observation tower rushed down to the ground and his guard leader reported the incident to the command office before leaving the tower. The first guard fired a warning shot.The truth was not revealed until after East Germany ceased to exist and the Stasi files were made accessible. Until then, the East German secret police had deceived Herbert Halli’s family, relatives, friends and colleagues into believing that he had died in April 1975 in an accident that he alone had caused and not by bullets that were shot at him at the Berlin Wall. In 1995, twenty years after her son was killed, Herbert Halli’s mother reported that she had never really believed the story that she had been told about an accident. [1]

Herbert Halli: Dormitory card, Nov. 6, 1974 (Photo: BStU, MfS, AS 754/70, Bd. 20, Bl. 192)
Herbert Halli, born on November 24, 1953 in the city of Brandenburg, trained to become an electrician. He married while he was serving on duty in the National People’s Army in Torgelow. A son was soon born but the marriage did not last long. At the end of 1974, before the divorce was final, Herbert Halli moved from Brandenburg to East Berlin. [2] He worked at various construction sites until he received a position at the state-owned „Bau- und Montagekombinat/Ingenieurhochbau Berlin," a construction company that was involved in building the Palace of the Republic. He moved into a worker’s dormitory in Lichtenberg, where he shared a double room. He and his roommate founded a FDJ youth club in the dormitory and he became its deputy director. The twenty-one-year-old also applied for membership in the Communist Party. [3] It appears that he wanted to integrate himself quickly and thoroughly into the political conditions that existed in East Germany. [4]

Herbert Halli: Work ID (issue date: 1974/75) (Photo: BStU, MfS, AS 754/70, Bd. 20, Bl. 193)
Herbert Halli began work at his new job on the construction site of the Palace of the Republic on April 3, 1975. By 3 p.m. he was already celebrating his first day at work by sharing a drink with his colleagues in the worker’s lounge. He left around 9 p.m., heavily intoxicated and without saying goodbye to his colleagues. Instead of driving home he took bus No. 32 towards the border in Berlin-Mitte. When the bus reached the last stop he refused to get off, or perhaps he had fallen asleep. He got into a brief scuffle with the bus driver during which he lost his wallet containing his ID and other personal documents. Herbert Halli finally got off the bus and walked towards the border. By the time the bus driver had found his wallet and handed it over to the East German police, Herbert Halli had already reached the security grounds near the intersection of Zimmer-and Otto-Grotewohl-Strasse. [5]

By 9:45 p.m. he had gotten past a two-meter-high metal fence and the interior wall. As he tried to approach the last obstacle - the border wall to West Berlin - he touched a signal fence and triggered an optical and acoustic alarm. A border guard on the nearby observation tower rushed down to the ground and his guard leader reported the incident to the command office before leaving the tower. The first guard fired a warning shot. Halli threw himself to the ground and in the next moment jumped up again and started running back towards the interior wall. He had clearly given up on his escape attempt. From a distance of about 100 meters, the guard leader fired a shot from his Kalashnikov from a standing position. He hit Herbert Halli in the back while he was trying to return to East Berlin. He had been climbing over the interior wall not far from what was then the House of Ministers, the former Reich Aviation Ministry that now serves as the Federal Ministry of Finance. Herbert Halli was delivered to the People’s Police Hospital in Berlin-Mitte with a bullet through his abdominal cavity. He died there from his wounds at 10:45 p.m. [6]

No one on the West Berlin side of the border appeared to have noticed the incident. Due to the „political-operative situation" – a reference to the upcoming meeting of government leaders at the Conference on Security and Cooperation in Europe where the Helsinki Accords were to be signed – the Stasi felt it was appropriate to conceal the circumstances of Herbert Halli’s death. It arranged with the East German police to have all entries concerning the incident erased. No written reports were to be made. It also had the date of death moved forward a day to April 4, 1975. On the death certificate the registry office noted the cause of death as an accident. [7]

The state prosecutor’s office was also misled by a fake autopsy report. It reported that a certain „head constable Fritsche," a fictitious figure constructed to serve as a witness, had found Herbert Halli dead in a construction ditch without any indication of third party involvement and without any external injuries.

Four days later the guard who pulled the trigger received the „Medal for Exemplary Service at the Border" for his „exemplary readiness for action and fulfillment of his duty." He was not informed of the fatal effect of his shots. [8]

The dead man’s relatives and colleagues at work were also led to believe that Herbert Halli was still alive. The East German police nonchalantly accepted the mother’s missing persons’ report on April 10 .Two weeks later, when the authorities were completely certain that the incident had not been observed on either the east or the west side, the East German secret police informed Herbert Halli’s mother and his workplace that the 21-year-old man had died. They were presented with a fabricated version of the events, claiming that Herbert Halli was very drunk and had fallen into a construction ditch near the Czechoslovakian embassy where he was found on April 4 without any ID on him. The investigation had established that his death was not caused by external factors.

Under pressure from the East German secret police, his mother refrained from viewing her son’s body and agreed to have the body cremated. The family was denied any benefits from state social security or from his workplace with the explanation that their family member had been responsible for his own death. Herbert Halli was buried amidst widespread sympathy at the cemetery in Brandenburg-Plaue in the grave of his father on May 8, 1975. The false death date established by the Stasi was later carved into his gravestone.

It had been easy to conceal Herbert Halli’s escape attempt because many people who knew him could not imagine that he had wanted to flee. Only a few knew of his secret thoughts about fleeing. He once pointed out the border in Berlin-Mitte to his mother and said: „It would be easy here." [9] His ex-wife was also familiar with his dreams of escaping. When she heard about Halli’s disappearance, her first thought was" ‘Herbert went to the Federal Republic.’ He had always wanted to go to his brother in Kiel." This is what she told the Berlin Police Central Investigating Agency for Governmental and Party Crimes in 1995. [10] What ultimately led the young man who was so integrated in East German society to undertake such an action remains unknown. Also unclear is the significance of a letter found in his dormitory a few days before his death. In it unidentified persons threatened to throw him out the window and kill him as they had already done to another dormitory resident because he had denied them entry into the youth club. Perhaps the young man wanted to escape this fate by fleeing to West Berlin. [11] A rough atmosphere prevailed among the construction workers; Halli’s roommate recalled that the dormitory was also known as the „flying school" because of the many physical fights and people falling out of windows. [12]

Apparently his colleagues at work believed the story created by the East German secret police. It did not occur to any of them that Herbert Halli might have tried to escape since they considered him to be someone who „towed the party line." [13] A little later, when a friend of his mother’s, an East German policeman, mentioned in passing that she would never learn the exact circumstances of her son’s death because they had been manipulated, she felt confirmed in her initial doubt about the official version presented to her. The following year, when she was unexpectedly presented with the „Banner of Work" award, the mother interpreted it as a gesture by the state to „make good" over the circumstances of her son’s death. [14]

In 1995, during the investigation on violent acts at the Berlin Wall, the Berlin Criminal Investigation Agency came across the censored circumstances of Herbert Halli’s death. In November 1996, the Berlin public prosecutor’s office filed charges against the gunman who had been unaware that he had killed someone before the investigation began. He convincingly stated before the court that he regretted the act and that it weighed on him heavily. In June 1998 he was found guilty of manslaughter and sentenced to a year on probation. [15]