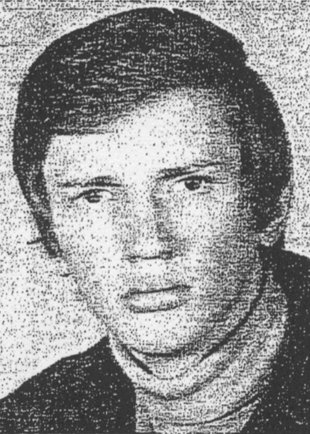 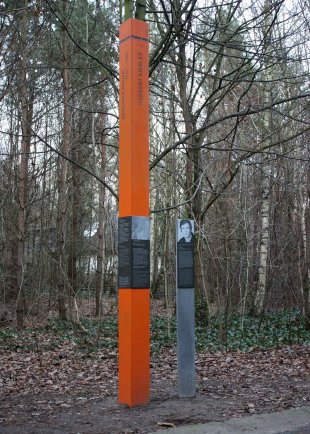 Herbert Kiebler was shot and killed while trying to escape on June 27, 1975. Just weeks before the final act of the CSCE (Conference on Security and Cooperation in Europe) treaty was signed in Helsinki, the Communist Party leadership did not want any negative headlines about fatal shots at the Wall. Since it appeared that no one on either side had noticed the attempted escape, the East German secret police decided to pretend the murder – which it was according to East German law – was a suicide and moved the site of the crime to a wooded area far from the border. Many people were involved in the cover-up, including foresters, policemen, civil servants, pathologists and state attorneys; the East German secret police had enough power to get all the necessary civilian institutions to cooperate with its plan. Not until the 1990s, when the public prosecutor’s office opened an investigation and family members were able to view the Stasi files, did the truth of Herbert Kiebler’s death come to light.

Herbert Kiebler was born on March 24, 1952 in Mahlow. He had worked since February 1975 as a presser in a semi-finished products metal plant in Berlin. His father had passed away in 1965. He lived in Mahlow, on the southern border of Berlin, with his mother and younger sister. His three older siblings had already left home. [31] On June 26, 1975, a warm summer’s day, the 23-year-old-metal worker was sitting with his clique in the local Mahlow tavern. That evening a fight broke out that ended in a bad brawl, which Herbert Kiebler lost. The fight was probably about card-sharking and gambling debts. When he arrived home drunk at 10 p.m., he was in bad shape and felt hurt by his buddies, both physically and emotionally. At the time his 15-year-old sister told the East German police that he had cried in shame and even spoken of suicide. Herbert Kiebler left behind a farewell letter to his mother before leaving his parents’ apartment a half hour later: "We’ll meet again either in prison or in West Germany" and, "Dear mommy, if I die, I wish you all the best." [32] He told his little sister that he wanted to go "over there." She tried to hold him back and ran after him but she eventually lost sight of him. [33]

Herbert Kiebler roamed the streets through the night. His brother later found out that he had taken a bus to Drewitz, gotten off at the highway and taken the next bus back to Mahlow. [34] He passed the border signal fence near what was then Highway 96 at around 12.30 a.m. He crossed the patrol path and continued towards the anti-vehicle trench, unaware that he had set off an alarm. Two border guards set off in a Trabant "Kübel" vehicle to search for the fugitive. When they noticed markings on the ground where someone had crawled, they got into position and unlocked their weapons. As soon as Kiebler left the trench obstacle, they saw him and opened fire at the suspect from a distance of 100 meters, although they could have easily arrested him without using their weapons, which they later admitted. Herbert Kiebler was hit in his chest and upper arm and collapsed. He bled to death immediately. 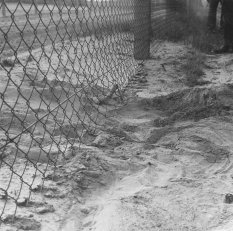 Herbert Kiebler: MfS photo of evidence of the escape attempt at the border fence between Mahlow and Berlin-Lichtenrade (II) [June 27, 1975] (Photo: BStU, Ast. Potsdam, AP 1179/75, Bl. 11)
The guards were awarded the "Medal for Exemplary Service at the Border" for their "determined action" and "high level of alertness." The company leader who had given them their orders was awarded the "Border Troop Merit of Honor." [35] A quarter of a century later they were tried by the Potsdam district court for manslaughter, as well as for aiding and abetting manslaughter, and were sentenced to 24 and 15 months probation. [36] One of the convicted men later became a member of the German Border Police in unified Germany. Herbert Kiebler’s sister, who served as a witness at the trial, did not sense any remorse among the defendants: "On the contrary, they grinned at me maliciously." [37] 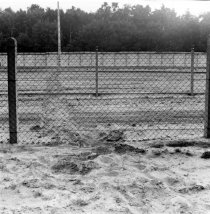 Herbert Kiebler: MfS photo of evidence of the escape attempt at the border fence between Mahlow and Berlin-Lichtenrade (I) [June 27, 1975] (Photo: BStU, Ast. Potsdam, AP 1179/75, Bl. 10)
To be absolutely certain that no information about the shots that had killed Herbert Kiebler leaked beyond the border, the East German secret police intercepted the mail that the border soldiers sent to their friends and relatives. In analyzing the letters, the Stasi found cynical comments, such as "Again one less person to eat our butter" and "He just had bad luck," but also sympathy: "He was a border violator, but was it really necessary to kill him so brutally from a distance of 80 meters? There were other ways of stopping him." Someone else wrote: "Would like to know what they are going to tell his parents." [38]

Deeply alarmed by her son’s farewell letter, his mother reported him missing on the morning of June 27. The Stasi began a cruel game of deception with the family. It construed a false statement made by a forester [39] and had a fake protocol on "forensic work at the crime site" written up. [40] An East German police "crime site investigation protocol" was made up "to establish a cover-up regarding the Kiebler family," the East German secret police wrote. [41] The family members were finally informed on July 3 that the dead body of Herbert Kiebler was found by a forester in a wooded area in Potsdam-West and that he had committed suicide with a knife. The state attorney of the Potsdam district was also informed of the "cover-up measures."

The older brother could not make sense of why Herbert Kiebler would have gone to the trouble to travel 40 kilometers from Mahlow to Potsdam in the middle of the night in order to commit suicide. In response to his inquiry, the Potsdam state attorney repeated the story created for the family, but refused to show any photos of the body. [42] The relatives did not believe the official version. They feared that Herbert Kiebler might have fallen victim to the people who had beaten him up the night that he fled. They also could not rule out that he might have tried to escape to the West as he had wrote in his farewell letter - and even more since - they had heard rumors of shots being fired at the border on the night that he disappeared. [43]

Herbert Kiebler was buried in the cemetery in Mahlow on July 11, 1975; the funeral guests were monitored by State Security. [44] The Stasi naturally denied the family the opportunity to view the deceased one last time. But Herbert Kiebler’s relatives wanted to bid him farewell. They secretly broke into the chapel, opened the coffin and saw the bullet wounds. [45] After that his mother repeatedly requested information from the East German police about the true circumstances of her son’s death. Her daughter recalled: "The lies about Herbert’s death caused our mother to perish. She received psychological treatment and died a bitter woman in 1993." 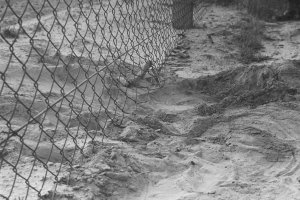 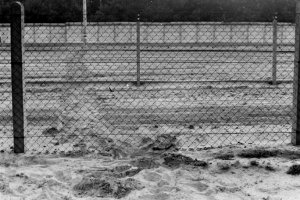