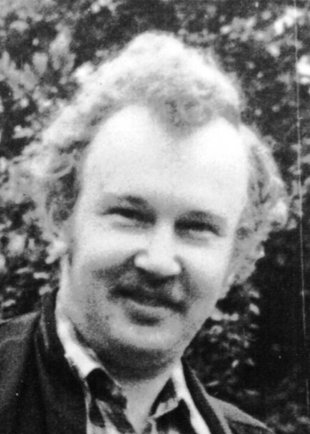 near Kopenhagener Strasse in Wilhelmsruh
on the sector border between Berlin-Reinickendorf and Berlin-Pankow
It was just past 11 a.m. on March 16, a sunny day with clear skies, when Johannes Muschol climbed over the railing of the viewing platform and onto the top of the Wall. "What are you doing there, are you crazy? Come back!" an eye-witness called out to him.Johannes Muschol, born on May 31, 1949 in Aschau, Bavaria, was 23 years old and studying medicine when he was diagnosed with schizophrenia. He was treated for this condition for the first time in 1972 and on many occasions in the following years; nonetheless, he was still able to complete his medical degree. His illness eventually became chronic, however, and caught up with him. In May 1979 he was ascribed as having a permanent work disability. [1] 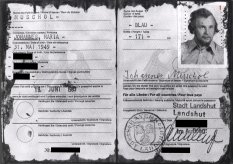 Dr. Johannes Muschol: West German passport found in the dead man’s neck pouch (Photo: BStU, MfS, AU 90/90, Bl 70-2)
Johannes Muschol drove with a friend to West Berlin on March 14, 1981 to take part in a house-warming party. [2] He got into a fight with his companion on the transit highway because Johannes Muschol insisted on getting out of the car. Later his friend speculated that he may have wanted to visit an aunt in East Germany whom he had spoken about. As a consequence of the fight, after they arrived in West Berlin, the two men parted ways. That evening they met again at the party and agreed to meet the next morning at 11 a.m. at the Bahnhof Zoo train station to drive home together.

But Dr. Johannes Muschol never showed up at the agreed meeting place. On the evening of March 15, he was picked up at a nursing home in Treptow, a district of East Berlin, and brought back across the border to West Berlin. [3] It is not known why he was in East Berlin, how he was "returned" to the West, or where he spent the night. On the morning of March 16, he made inquiries on the west side of the Bornholmer Strasse border crossing about the security measures on the border. [4] Then he wandered around the West Berlin district of Reinickendorf, where he asked a number of residents for bread and water and for a place to wash himself. He later showed up at the sector border between Alt-Reinickendorf and the East Berlin district of Wilhelmsruh and climbed onto a viewing platform situated right next to the Wall.

It was just past 11 a.m. on March 16, a sunny day with clear skies, when Johannes Muschol climbed over the railing of the viewing platform and onto the top of the Wall. "What are you doing there, are you crazy? Come back!" an eye-witness called out to him. [5] But Johannes Muschol jumped over the Wall and ran across the death strip towards East Berlin. Two border guards saw him and one of the guards left the tower to arrest him. He thought that the strange, confused behavior of the "border violator" was due to alcohol or drugs, which later was determined not to be the case. "Halt and don’t do anything foolish," the guard called to him as he tried to hold on to him by his jacket. [6] Johannes Muschol seemed to pause for a moment, but then he suddenly broke loose and ran through the anti-tank obstacles to the border signal fence, pulled the barbed wire apart and climbed through the opening. He tried a number of times without success to climb over the interior wall while the guard who followed him demanded that he surrender and allow himself to be arrested. The second border soldier, the guard leader that day, was watching the events from the tower located ten meters away. "Go on and shoot, you idiot," he called out. [7] But the guard on the ground did not shoot. Instead, he stood just a few meters away from Muschol and spoke calmly to the clearly confused man, who he believed was just about to surrender. "I do not want to shoot. Just come down and don’t do anything foolish," he called to the guard leader on the tower. [8]

Although it was obvious that Muschol was unable to get over the three-meter-high wall, the guard leader shot at him from his watchtower twelve meters away. All three bullets hit Johannes Muschol and he fell to the ground. He died within seconds from a bullet that hit him in the back and went through his heart. "Are you stupid?" the other border guard called to him, horrified by what he regarded as a totally unnecessary shooting that had also put him in danger. [9]

The body was carried away hours later, under the cover of darkness, and brought to the forensic institute of the Military Medical Academy of Bad Saarow, a facility of the National People’s Army, where an autopsy was conducted. The death certificate was first issued under the name Johannes Muschol, but then the same military pathologist signed a new death certificate that turned Johannes Muschol into an "unknown" dead man. [10] The military state prosecutor of the East German general state prosecutor’s office was also involved in the cover-up and fake documentation. The military state prosecutor, who had ordered the autopsy under Johannes Muschol’s name, later classified him as having died "an unnatural death" before releasing him to the Berlin-Mitte city district council as an "unidentified male person." [11] The Stasi did not transfer the body to the Baumschulenweg Crematorium for another 14 days and used money found on the dead man to cover the expenses. [12] After 1990, documents regarding the location of the urn could not be found in the crematorium or in the administrative offices of the Baumschulenweg Cemetery. Interrogations of people believed to have knowledge of the events turned up no new information.

The border guards were commended for their action a few days after the incident occurred. They were decorated and sent on special leave. They swore themselves to absolute secrecy to the East German secret police, which thereafter kept them under surveillance.

After March 16, 1981, the West Berlin and West German media was dominated by headlines about an unknown man who had been shot and perhaps killed at the Wall. [13] On March 17, the Permanent Mission of the Federal Republic in East Berlin tried to attain information from the East German foreign office about the identity of the man, his whereabouts and condition. An attempt was also made to establish direct contact, but the East German diplomat in charge declared that the Permanent Mission had no jurisdiction over the case and rejected the inquiry. [14]

The week after the incident, Johannes Muschol’s siblings informed the Munich police department that they believed the man who had been shot might be their brother. The family filled out an official missing persons report on June 1, 1981. [15]

A number of months passed before eye-witnesses who had seen the East German border guards shoot down the man were able to positively identify the victim as Johannes Muschol. [16] "The man in the death strip was a doctor," the "Bild-Zeitung" paper reported in January 1982, and the "Berliner Morgenpost" asked: "What happened to Dr. Muschol?" [17] To find the answer, his family sought out Wolfgang Vogel, the East German negotiator for humanitarian questions. But he was certain that the person in question could not be Johannes Muschol since he would have no doubt been informed of this.The dead man’s brother recalled Vogel saying that "a case like that could no longer be kept hushed up, even in East Germany." [18]

Honecker’s confidant was either wrong or purposely gave inaccurate information. The deadly shots fired on March 16, 1981 came at a politically very inopportune time for the Communist Party leadership: The Leipzig Spring Convention had opened just days earlier; Rudolf Kirchschläger, the president of Austria, was paying a visit to East Germany on March 16; and the then SPD chairman, Willy Brandt, was due to arrive in East Berlin on March 17. As a result of increasing economic problems, East Germany was all the more dependent on trade with the West and believed that a good political climate was beneficial to trade relations. In order to avoid an incident like the one that had just occurred, the order to shoot fugitives at the border was explicitly toned down on March 16 and border guards were told to only shoot in cases of self-defense. [19] The leadership in East Germany decided that covering up the fatal shots fired at the Wall made more sense than admitting what had happened; and once they had started, they had no choice but to continue with the cover-up measures. The East German foreign office responded in early 1982 to further inquiries from the Permanent Mission that "no Johannes Muschol was known of in East Germany" and that he had also not turned up "as a corpse." [20]

His family was very upset by his unknown fate, but all their efforts over the years – through official channels and on their own initiative through attorneys – to understand what had happened remained unsuccessful until East Germany ceased to exist.

The shooting on March 16, 1981 violated the standard duty regulations of the border troops and was contrary to the special politically motivated orders of the day. The crime was also unlawful under East German law, yet a criminal investigation was not opened. The gunman was finally tried 15 years later. During his trial before the Berlin district court, he expressed his regret over having killed a person; he also said he had been unable to put the act out of his mind all these years. [21] But because he had shot at Johannes Muschol "without scruple or inner repulsion," although the man could have easily been arrested, the district court found him guilty of manslaughter and sentenced him to three years in prison. [22]

The public prosecutor had to drop the charges of aiding and abetting a crime and obstructing justice in 1998. The accused, including Wolfgang Schwanitz, the head of the Berlin Stasi district administration, and his then deputy and later successor, Siegfried Hähnel, either refused to testify or claimed to be unable to remember anything. Evidently any form of honor or humanity was foreign to these Chekists and their assistants. With their statements they deprived a dead man, for whose anonymous burial they were partially responsible, from receiving a dignified funeral. The investigation fizzled out because of a lack of informed witnesses who were willing to testify and who were not themselves suspect. [23]

The gravesite of Dr. Johannes Muschol has yet to be located.