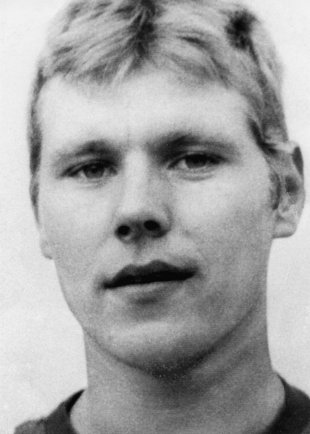 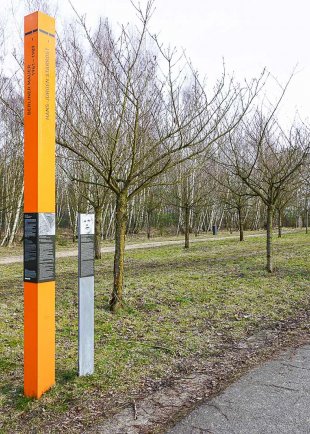 died from his bullet wounds on May 16, 1981
When he tried to climb over the interior wall at about 1:10 a.m., two border guards heard him make a noise and, when they checked out the situation, they found the ladder and sounded the alarm.Hans-Jürgen Starrost was born on June 24, 1955 in Berlin. After finishing tenth grade, he completed an apprenticeship as a skilled construction worker at the state-owned underground engineering collective combine in Berlin. He then served his military duty with the National People’s Army. At the age of 22, he was a skilled construction worker who had "served" and thus had fulfilled the obligations of young East German citizens. [1] At the time he probably was not aware that this state would call upon him his entire life and, when necessary, "re-educate" him.

He changed jobs a number of times after his service in the army and at different periods of time did not work at all. He was subjected to "educational measures of various work collectives and state agencies," which he always tried to get out of. [2] In late 1979 he was sentenced to eleven months in prison for "disturbing the public order and security." [3] Hans-Jürgen Starrost had not broken any law; his crime was being "idle" and not working. Perhaps he had not found the place where he wanted to live and work, or maybe he had difficulty adjusting to his sudden "freedom" after having been patronized for 24 years. In East Germany that was reason enough to be put in prison.

He served his sentence until October 1980 in the Rüdersdorf Penitentiary, which was connected to a cement factory and a work camp, both of which were health hazards. After his release, he handed over his identity card. He was then assigned a job and had to report regularly to the "parole officer" (ABV) of the East German police. [4] But soon Hans-Jürgen Starrost stopped going to work and stopped reporting to the police as well. When he called his parole officer on April 7, 1981, he learned from the man’s wife that there was a search warrant out for him because he had violated the monitoring measures and would therefore have to go back to prison. He decided to go into hiding to avoid imprisonment. [5]

The 25-year-old took a train to Berlin-Schönefeld on April 13, 1981 and took a bus from there to Teltow. He wanted to visit a friend he had met when he was in the army and he hoped he could stay with him. When he did not find him there he went into a bar and decided to try to flee across the nearby border the following night. "Under no circumstances was I going back to prison," he later said in an interrogation. [6] He stole a metal ladder from the Sigridshorst housing settlement in Teltow on his way to the border territory. When he tried to climb over the interior wall at about 1:10 a.m., two border guards heard him make a noise and, when they checked out the situation, they found the ladder and sounded the alarm. They searched for the fugitive together with their supervisor, who had joined them with his driver and an ABV. Hans-Jürgen Starrost had hidden on a nearby piece of property where he was seen by the ABV. The ABV held his cocked pistol and ordered him to surrender. Instead Hans-Jürgen Starrost tried to flee. When he was blinded by a spotlight, he ran into the arms of a border soldier who held on to him and twisted his left arm behind his back. The soldier commented: "In order to stop the male person from fleeing, I grabbed him by his left wrist and the person stopped immediately." But the soldier continued to explain: "The VP man stood with his weapon in firing position in front of the male individual." [7] In his hopeless situation, the man being detained allegedly began flinging his free right hand around. Did the policeman just lose his nerve or had Hans-Jürgen Starrost managed to break loose and attack the armed man, forcing him to act in self-defense and shoot? The files only provide the answer presented by the perpetrator who took Hans-Jürgen Starrost’s life. 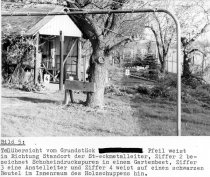 Hans-Jürgen Starrost: MfS crime site photo with evidence of escape [April 14, 1981] (Photo: BStU, BV Potsdam AP 728/83, Bl. 15)
Three and a half hours after the events, the East German policeman testified to the Stasi. The guard, himself surprised by his actions, admitted his responsibility: "I stood right in front of the perpetrator [here and henceforth ‘perpetrator’ refers to the victim Hans-Jürgen Starrost -- ed.] and ordered the perpetrator again to put his hands over his head and to stand still. Suddenly the perpetrator lunged at me and there was a scuffle. At that point I still had my gun in my right hand and was only repelling this attack with my left hand. I kept my right hand down and during the attack I must have tensed up and my finger pulled the trigger, causing a bullet to be suddenly fired. It is my view that at this point I no longer had any reason to use the weapon. The perpetrator was surrounded and could not have fled." [8] The Stasi’s technical investigation office examined the crime weapon – a "Makarov" pistol – and tested its condition. It came to the conclusion that "when the pistol is handled correctly, a bullet cannot be fired accidentally." [9] But the bullet hit the man in his stomach at close range, shattering his left kidney and spleen, and exited through his back. [10] The man who was hit groaned: "You thugs, if you had hit it right to begin with then at least it would be done with." [11]

Hans-Jürgen Starrost was first brought to a border base. "Had the urgently needed operation been done immediately and intensive care provided, the seriously injured man would have had a chance of survival." [12] Instead, the border regiment’s military doctor diagnosed a "mild injury" and had no objection to Hans-Jürgen Starrost’s being questioned by an interrogation officer of the Stasi district administration of Potsdam before receiving treatment. The critical condition of the fugitive was evident even to the Stasi agent who had to interrupt the interrogation a number of times due to "necessary medical measures." [13] The Stasi interrogator recorded the interview and noted at the end: "The person in question did not take advantage of his right to listen [to the recording]. [14]

After the interrogation was competed, a border troop truck took the badly injured young man to the army hospital in Potsdam where an emergency operation was conducted. An acute failure of the kidneys set in the following days and Hans-Jürgen Starrost’s condition became more critical. The Drewitz Army Hospital did not have an intensive care unit. After a week had passed, the extremely sick man was transferred to the intensive care unit of the Potsdam District Hospital. Evidently the transport was delayed because the hospital was not one of the Stasi’s preferred clinics for treating victims of the border. But the measures taken there came too late. Hans-Jürgen Starrost died on May 16, 1981 at 7:30 a.m. from his critical injuries. [15]

Eleven years after the fatal shots were fired, the Berlin public prosecutor brought charges against the parole officer of the East German police for attempted manslaughter. He had continued to work as an ABV until 1989 and also served under the code name "Manfred" as an informant for the East German secret police. [16] The public prosecutor accepted the perpetrator’s version of the events and found that the shots had not been fired intentionally. The shot was "released" when Starrost resisted his arrest. The charges were dropped in June 1995 because the East German policeman had used his gun "without a direct or conditional intention to kill." [17]

On the day of the crime, April 14, the East German secret police decided "that regardless of how his health condition develops [...], Starrost’s relatives should not be informed of what happened until after the 10th Party Congress [of the SED]." [18] On May 20, 1981 the state prosecutor and East German secret police informed Hans-Jürgen Starrost’s mother and sister of the death of their son and brother. Contrary to the statement of the ABV who fired the fatal shot, they were told that the dead man had attacked the policeman after a warning shot had been fired and that the policeman had to act in self-defense. [19] They were pressured into agreeing to a cremation of the body and to having the clothes of the dead man destroyed. [20]

Hans-Jürgen Starrost’s urn was buried in the cemetery in Rahnsdorf on June 3, 1981 in the presence of his immediate family. [21]