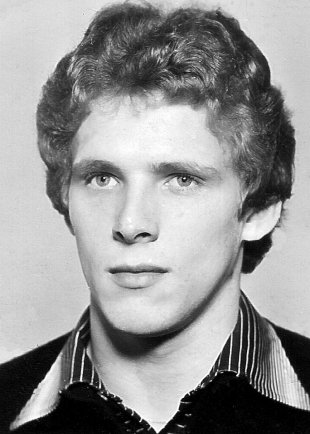 beneath the Böse Bridge
on the sector border between Berlin-Prenzlauer Berg and Berlin-Wedding
When a freight train heading for the city center made a short stop at the Berlin-Pankow station that evening, he used the opportunity to climb onto the train unnoticed. The 26-year-old man jumped down beneath the Böse Bridge, right at the Bornholmer Strasse border crossing.During those memorable days in the winter of 1981, when the leaders of both German states were engaged in talks from December 11-13, a young man died in the middle of Berlin while trying to flee to the West. His death went unnoticed by the public. Not far from Berlin, in Hubertusschloss, a hunting lodge near the Werbellinsee lake, West German Chancellor Helmut Schmidt was engaged in negotiations with Erich Honecker, the Communist Party’s general secretary and East Germany’s state council chairman, over how to ease travel for passengers at the inner-German border. At the same time, Thomas Taubmann, driven to despair, went to the Wall in the belief that if he could get beyond it, his problems would be solved.

Thomas Taubmann: Identification card (Photo: BStU, MfS, AP 7643/82, Bl. 20)
Thomas Taubmann was born in Berlin on July 22, 1955. [1] He grew up as an only child in Weissensee in the eastern part of the city. His mother came from West Berlin and the family had many relatives in the West with whom they kept in touch even after they had been separated by the Wall. The parents distanced themselves from the political regime and raised their children in the same spirit.

Thomas Taubmann went to school in Weissensee. He was a good swimmer and, for a time, he attended a sports school until the pressure became too much for him. After finishing tenth grade he completed an apprenticeship as a machine fitter in a house building combine. After this he trained to become a specialist for crane repairs. Because of his special technical skills, his company assigned him to the engineering school for mechanical engineering and electrical technology in Lichtenberg where he began his studies in 1977. He was already married and in 1976 the young couple gave birth to a son. It looked like a promising future awaited the young family.

But in 1979 the 24-year-old man’s life changed abruptly. His marriage became troubled and ended in divorce. Shortly before completing his degree, Thomas Taubmann quit his studies. He waited on tables in various restaurants until he was assigned to work as an emergency fitter in "7. Oktober," a machine tool combine. After his divorce, he moved back to his parents’ home for a while. Then he moved into a separate flat in the house, which was in such abysmal condition that he often fled to his grandmother’s. Something threw him off track, he developed an alcohol problem and was unable to get back on course. One day in the fall of 1981 he went shopping but did not have any money on him to pay for his goods. When he tried to leave the shopping center with the unpaid items, he was caught. His parents’ offered to pay for the damages, but the offer was rejected for "educational reasons." He was supposed to appear in court on December 14, 1981 and answer for his conduct – of all places in Weissensee, where his mother worked as a lay assessor. His father thought that his son probably found the situation humiliating and embarrassing for himself, but even more so for his mother. This may have been the final straw for him and, after long deliberation, or perhaps even after making a spontaneous decision, Thomas Taubmann decided to flee.

Saturday, December 12, 1981 was a day with light frost and clear skies. A thin sheet of snow covered the divided city. [2] Thomas Taubmann had a few drinks to bolster his courage. When a freight train heading for the city center made a short stop at the Berlin-Pankow station that evening, he used the opportunity to climb onto the train unnoticed. The 26-year-old man jumped down beneath the Böse Bridge, right at the Bornholmer Strasse border crossing. It can only be presumed what happened next. The Wall here was higher than it was elsewhere in the city, almost five meters tall, and he probably crashed against it. The Stasi deduced from the evidence that after Thomas Taubmann jumped, he fell under the freight train and was run over. Soon afterwards the driver of an oncoming train noticed a dark object on the tracks. He reported it to the transport police who later recovered the dead man. [3]

That same night the investigators of the transport police searched Thomas Taubmann’s apartment and found a sealed envelope addressed to his parents. It contained a farewell letter that was dated December 11, the day before he tried to escape. In it Thomas Taubmann told his parents that he had to get as far away as possible from all the worries that were weighing him down and that he was going to Czechoslovakia to try and flee across the border between Czechoslovakia and Austria. [4] Evidently the young man changed his plans or, perhaps anticipating that his escape at the Berlin Wall might fail, he intentionally laid a false trail to protect his parents from being subjected to reprisals for knowing about his plan.

On the morning of Sunday, December 13, 1981, the investigators of the transport police questioned the parents about their son without saying why. Only after the father demanded an explanation did they answer vaguely that their son had died in an accident while under the influence of alcohol, but that the details had not yet been fully clarified. They brought the parents to the forensic institute of Charité Hospital to identify the body.

In consultation with the transport police, the Stasi decided that same day that the man’s failed escape attempt should be "presented as a fatal accident in which the man was run over by a train and the case closed." [5] Thus the parents were not to be informed about the content of the farewell letter or even made aware of its existence. [6] A thorough investigation was conducted to determine whether anyone might have seen the incident from East or West Berlin or from a passing train. [7] Apparently, because the German-German summit talks were taking place, the East German secret police was eager to keep knowledge of Thomas Taubmann’s fatal escape attempt from the public.

Three days after his death, his parents were summoned to the transport police in Karlshorst and interrogated separately for over three hours. They initially tried to convince the father that his son had committed suicide, but the father found this difficult to believe. He insisted on knowing more details and learned about the farewell letter his son had written, although it was not given to him and he was not allowed to see it. Finally, his interrogators read him a few sentences out loud, but all he learned was that the "accident" had occurred in the border territory near Bornholmer Strasse.

Thomas Taubmann was buried in late January 1982 in the municipal cemetery in Weissensee in the presence of his relatives from the West and under the distrustful surveillance of the Security Service. Since the family had no knowledge of an escape attempt, they did not publicize the incident in the West.

Consequently, Thomas Taubmann’s failed escape attempt did not become known until after 1990. Twenty-seven years after he died -- a death his mother, who died in 1999, had never been able to get over -- the father learned from Stasi files the exact circumstances of his son’s death. Only then did he hold the farewell letter in his hands, not the original, but a copy, which ended with the words: "I know that in making this move I am shutting many doors behind me, but I am completely aware of the consequences. I will contact you on Monday at the latest." [8]