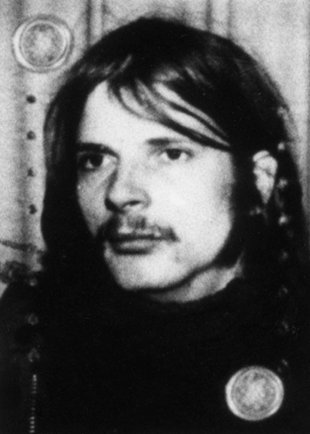 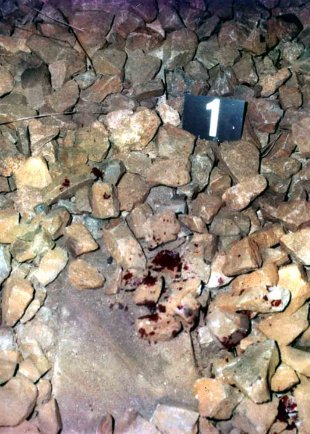 died from his bullet wounds on June 6, 1982
On June 4, 1982 at about 11 p.m., the 27-year-old Lothar Fritz Freie entered the East Berlin "front border territory" from West Berlin and crossed the "Allied track" under the Helmut-Just Bridge heading north. His upper body was bare and he was carrying his pullover in his hand.Lothar Fritz Freie, born on February 8, 1955 in Grossburgwedel in Lower Saxony, West Germany, wanted to study law and, after graduating from high school in 1977, moved with a schoolmate to West Berlin. But for unknown reasons, he quit his studies after four semesters. He showed up sporadically at his friend’s apartment, his official residence. Unemployed and penniless, he struggled in the divided city for the next few years. Although he was „deteriorating" and having major financial difficulties, he did not take the advice of his friend, who had suggested that he stop by for a meal at least once a week. [1] During one of his visits he complained that he did not know how he could go on living this way. [2] The failed student no longer had an ID. Once he said that he had sold it, but later claimed he had left it at the „facility." His friend no longer understood him. Freie then asked his friend if he could somehow get him home, back to West Germany, but this was impossible from West Berlin without an identity card, and so he refused his friend’s request. Indeed, it would have been a very risky act of friendship. 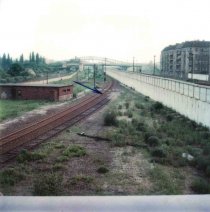 Lothar Fritz Freie: MfS photo of the East German territory situated in front of the border fortifications near the Helmut-Just Bridge (Photo: BStU, MfS, GH 61/83, Bd. 2, Bl. 25/o)
The night of June 4 was warm and cloudless. The moon was almost full and it was the only source of light on the grounds near the closed-down S-Bahn station at Bornholmer Strasse between the Böse Bridge in the north and Helmut-Just Bridge in the south, and an old railroad wall in the west and the five-meter-high border wall in the east. This was a typical „no man’s land" area with waist-high weeds that had not been touched in years. The ground, strewn with old discarded tracks, brick debris from torn down railroad buildings and many rabbit holes, was hard to walk on, at least in the dark. There was only one track still in use in this area, which the border troops referred to as „front border territory:" the so-called Allied track. Only a few trains ran along here each week for the French garrison in the north of the city, but the tracks remained an unhindered connection between East and West Berlin.

On June 4, 1982 at about 11 p.m., the 27-year-old Lothar Fritz Freie entered the East Berlin „front border territory" from West Berlin and crossed the „Allied track" under the Helmut-Just Bridge heading north. [3] His upper body was bare and he was carrying his pullover in his hand. To this day it remains unclear what he was trying to do, but even later investigations found nothing to suggest a possible suicide attempt. Two border soldiers in a watchtower on the Helmut-Just Bridge noticed the intruder and reported it, but they soon lost track of him in the dark. A few hundred meters farther on, near the Böse Bridge, Freie came into view of the guards in the next observation tower. The two guards there were given the order to expel the „border violator" from the territory of East Germany. Both guards left their tower and, when they approached Lothar Fritz Freie from a distance of about 30 meters, they called out to him according to regulation: „Citizen of West Berlin! You have entered the territory of East Germany. Please leave our territory!" [4] According to the statements made by the border guards, Freie mumbled something incomprehensible in return, turned around and quickly walked along the tracks back the way he had come. He only had to go a few meters to the left to cross the S-Bahn tracks to reach West Berlin territory, but he probably did not realize this. He seemed to want to leave the forbidden area by way of the „Allied track" and take the same route that he had taken to get to where he was. He could have easily done this if the two guards on the watchtower at the Helmut-Just Bridge, which he had to pass by on his way back, had not received the order to arrest the „border violator."

The impassable railroad grounds stood between Lothar Fritz Freie and the two guards, who were unable to get through the deserted grounds quickly enough to cut him off. Unaware that Freie had just been ordered to leave the territory of East Germany, they called out to him to stop, after which Freie began to run. One of the guards fired a warning shot. Freie continued to run. The guard did not see where he was going and fell on his knees. At this point it seemed impossible for him to catch up with Freie. He aimed two shots at him. Lothar Fritz Freie collapsed and remained motionless on the „Allied track." When the guards reached him, he told them in a weak voice that they should just leave him there or shoot him. [5] The guards first dragged him to a railway signal box to get him out of view of the West. Then they took him to the watchtower and provided first aid. When they asked him what he was doing on East German territory, the man, seriously wounded and in a state of shock, said he wanted to „put up a tent." [6] 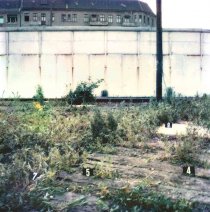 Lothar Fritz Freie: MfS photo of the site where the bullet casings were found (Photo: BStU, MfS, GH 61/83, Bd. 2, Bl. 28/u)
In the early morning hours of June 6, following two emergency operations, Lothar Fritz Freie died in the People’s Police Hospital in Berlin-Mitte from the consequences of a bullet wound through the side of his pelvis. He was not inebriated. He was not checked for other intoxicants. [7]

Even according to East German law, shooting at a West Berliner who was clearly following the order to leave East German territory was illegal. But charges were not filed against the two border soldiers. On the contrary, both were commended and awarded honors. In order to facilitate a cover-up of the incident, they were both immediately transferred to another unit and never learned how severe Freie’s injuries had been or that he had died. [8]

In late 1993 the Berlin district court tried the gunman, who was twenty years old at the time of the crime, as a youth for manslaughter and sentenced him to two years in prison. The sentence was commuted to probation. [9] His guard leader, who had been raised by his parents to be critical of the regime, admitted that while they were pursuing Freie he considered escaping himself, but decided against it because he feared his own comrade would shoot him. The court convicted him in 1995 of complicity in the crime and sentenced him to a year and eight months probation. [10]

On the West Berlin side, police and customs staff heard the shots and watched as the badly injured Lothar Fritz Freie was transported away. The incident received strong media attention. The West German federal government and West Berlin Senate immediately condemned the incident, stating that it stood in glaring contradiction to the aims of the Basic Treaty and the CSCE final act of Helsinki. [11] Hans-Otto Bräutigam, head of the Permanent Mission of the Federal Republic in East Germany, spoke with the East German foreign minister representative and referred to the incident as a „major encroachment on a human right recognized worldwide, namely the right to live," demanding that „the people responsible be held accountable." [12] The French city commander protested on behalf of the British and U.S. counterparts against the „most recent disregard for human life" and demanded once again „that a stop be put to these inhuman practices." [13]

A short time later the deputy official of East Germany responsible for visits informed the West Berlin Senate that a West Berliner had crossed the border to East Berlin on the night of June 4. The diplomat claimed that the man had insulted the border soldiers and assaulted them and could only be arrested „through extreme means." At the same time, he handed Gerhard Kunze, the Senate official for East Germany, a note of protest, demanding that the West Berlin Senate take „effective measures to prevent these kinds of serious attacks." [14] The East Berlin minister failed to mention that the „arrested man" had died. [15]

The East German secret police held on to the body for many weeks. It probably feared the public denunciations against East Germany that would follow after it was returned and the clearly evident bullet wounds were seen. Moreover, on June 11, 1982, the American president, Ronald Reagan, was paying a visit to West Berlin.

Finally, in August, the Stasi ordered the body to be quickly cremated and this was done on August 24, 1982 in the Baumschulenweg Crematorium. Five weeks later Lothar Fritz Freie was secretly buried in the common urn burial grounds of the cemetery there. [16] After this was done the Permanent Mission of the Federal Republic in East Berlin was notified and thus presented with a fait accompli.