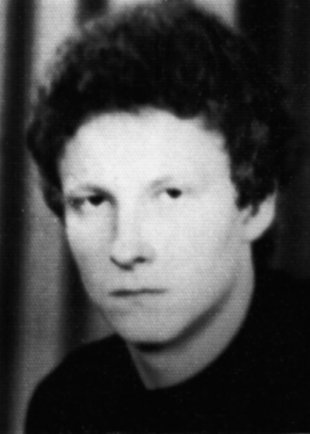 at the Pankow municipal cemetery
on the sector border between Berlin-Pankow and Berlin-Reinickendorf
Silvio Proksch left his parents’ house with his brother on December 25, 1983 at about 7 p.m. They were both highly inebriated. Without having made any preparations, Silvio Proksch decided that he wanted to flee to West Berlin. "He said he wanted freedom and everything here made him sick," his brother later reported.Silvio Proksch was born on March 3, 1962 in East Berlin. After finishing school he completed a bricklayer apprenticeship and then worked for a carpentry and joiner company. He lived with his brother and parents in the East Berlin district of Pankow. Nine of his siblings had already moved out of their parents` house. Silvio Proksch had been feeling constrained for a long time by the conditions in East Germany, but he had never spoken to anyone about concrete plans to escape before he tried to flee. [1]

Silvio Proksch left his parents’ house with his brother on December 25, 1983 at about 7 p.m. They were both highly inebriated. Without having made any preparations, Silvio Proksch decided that he wanted to flee to West Berlin. "He said he wanted freedom and everything here made him sick," his brother later reported. [2] He only took the most important personal documents with him: his identity card, his training certification card and his social security identification. The weather seemed good for his undertaking. It was raining and misty. It is possible that family differences during the Christmas holidays had provided the final impetus for his decision to flee. [3] While they were walking towards the border, his brother tried to talk him out of his plan.

When the two brothers reached the Pankow Burger Park at the old Niederschönhausen pumping station near the Panke River, Silvio Proksch’s brother stayed back in front of the cemetery, which was located directly on the border. Silvio Proksch climbed the cemetery fence that bordered the interior wall. He set off an alarm when he passed the signal fence at about 7:30 p.m. A border guard in a watchtower noticed him, called out to him and fired two warning shots. But Silvio Proksch continued undeterred towards the concrete wall. At the same time the border soldier began to fire shots aimed at the fleeing man. A bullet hit Silvio Proksch in his hip, shattering the right hip artery and femoral vein. He ran a few more meters before collapsing in front of the concrete wall. [4]

It took a long time before the twenty-one-year-old received any medical care and Silvio Proksch bled to death on the death strip. [5] He was declared dead upon arrival at the People’s Police Hospital in Berlin-Mitte at 9:15 p.m. [6] A medical report from the Franziskus Hospital from 1992 stated: "All that can be said with certainty is that, had the young man, who had been shot, immediately been brought to a regular hospital with a properly trained anesthesia and surgery unit, the ligature of artery and vein combined with a professional blood transfusion would very likely have saved his life." [7] A short time later the guard was awarded the NVA border troop bronze medal of merit for his "brave and determined action." [8] In early November 1994 the Berlin district court convicted him of manslaughter and sentenced him to a year and nine months on probation. [9]

Silvio Proksch’s brother heard the gunshots. After his brother was transported away, he sought out his older siblings and told them what had happened. His family waited worriedly for the official news to come but no one came to inform them of his death. [10] Meanwhile, a special commission of the East German secret police had taken over the case and decided that since the incident had not been noticed in West Berlin, the deadly shots should be covered up.

On December 28, 1983 one of Silvio Proksch’s sisters reported her brother missing to the criminal investigation department of Berlin-Pankow, but did not receive a response until January 20, 1984. Another sister and her husband were sought out by the East German secret police and interrogated for ten hours in the East Berlin police headquarters. Even their 14-year-old son was subjected to an interrogation at his school. Each member of the family was also subsequently interrogated. Although the family knew from the brother what had happened, the Stasi agents denied that an escape attempt had taken place on December 25, 1983 and claimed that there had been neither a death nor a person arrested under the name Silvio Proksch. The Stasi also threatened to take legal steps if the family looked into the matter any further. They would be guilty of "slandering the state." [11]

A short time later Silvio Proksch’s brother was arrested by the East German secret police for trifling offenses and imprisoned for more than two years. He was forced to agree in writing to keep quiet about his brother’s escape attempt. After he was released from prison he was subjected to a "Berlin ban" and had to move to Eisenhüttenstadt an der Oder. [12]

After submitting many letters and complaints, in August 1990 the East German military state prosecutor finally told the family what had actually happened on December 25, 1983. The day after Christmas the East German secret police had taken Silvio Proksch’s body to the military forensic institute in Bad Saarow. He was not listed in any death register of East Germany and his body has remained missing without a trace since December 30, 1983. [13]