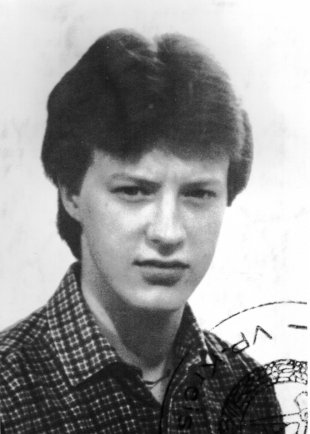 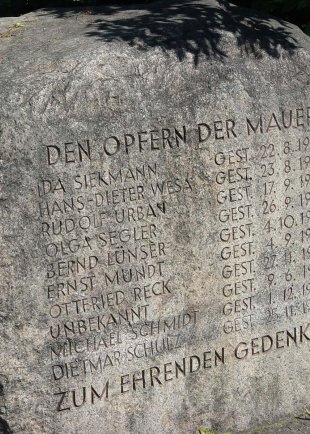 on Schulzestrasse, near the Wollankstrasse S-Bahn station
on the sector border between Berlin-Pankow and Berlin-Reinickendorf
He first climbed over the wall to a back courtyard and then the first border barrier. His companion was no longer with him at this point. When he used the ladder to climb over the signal fence he triggered an optical and acoustic alarm. At this point the two guards in a tower 100 meters away were well aware of his presence.Michael Schmidt was born on October 20, 1964 in Bernau near Berlin and grew up with a brother and sister in Schwanebeck near Berlin. After finishing school he completed training as a carpenter in a building repair company in Pankow. According to his father, he was not one to keep his opinions to himself. [1] When the Bernau military district unit pressured him to enlist for three years with the National People’s Army, he refused. He also categorically refused to serve at the border and was said to have replied to his solicitors that he would not consider "shooting defenseless people in the back." [2]

He occasionally expressed an interest in fleeing to the West to his colleagues at work. As the first major wave of people leaving East Germany began in 1984, he made concrete plans to apply for an exit visa. But after speaking to his parents and in light of the common practice in East Germany of holding family members accountable for the actions of their children, he decided against it, mainly out of consideration for his brother, who was studying at the university. [3]

In November 1984 Michael Schmidt was assigned by his building repair company to a job very close to the border. Residential buildings on Wollank and Schulzestrasse were being rebuilt. From the buildings’ top stories he was able to study the border facilities in detail. On November 30 he and his friends went to the disco of a youth club in Pankow. His friends recalled that he seemed like he was bidding farewell to them that evening as if he would not see them again for a long time. [4] He left the disco before midnight. In the early morning hours of December 1 he managed to gain access to one of the buildings on the border where he had been working. He was accompanied by another person who has remained unidentified to this day. Two wooden ladders were waiting for him at the construction site and he took them with him. 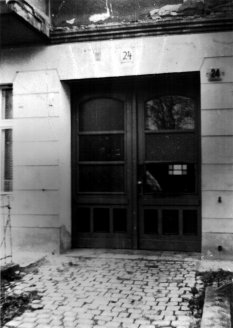 Michael Schmidt: MfS photo of escape route through a building on the border in Berlin-Pankow [Dec. 1, 1984] (Photo: Polizeihistorische Sammlung/Der Polizeipräsident in Berlin)
He first climbed over the wall to a back courtyard and then the first border barrier. His companion was no longer with him at this point. When he used the ladder to climb over the signal fence he triggered an optical and acoustic alarm. At this point the two guards in a tower 100 meters away were well aware of his presence. One guard fired from the tower; the other guard climbed down and began firing from the ground. Michael Schmidt had already reached the last obstacle. He leaned the ladder against the wall and climbed up it. He had already grasped the top of the wall with one of his arms when bullets hit him in the back and knee. He slipped, got caught with his foot on one of the rungs and fell to the ground. [5] "What the hell are you doing?" one of the guards asked Michael Schmidt excitedly, upon which he answered: "So you guys got me after all." [6]

The East German secret police made the East Berlin witnesses swear themselves to secrecy, but after the Wall fell they reported that, in addition to the first two guards, another three guards had also arrived, one of whom nudged the injured man on the ground with his foot. [7] They then dragged him by his legs to the patrol path, loaded him onto a military vehicle and carried him to the watchtower where he was out of view. Although Michael Schmidt begged for help, all they did was cover him with a blanket. Almost an hour passed before he was given medical care. At 4:25 a.m. an ambulance took him to the People’s Police Hospital in Berlin-Mitte where he died from his wounds at 6:20 a.m. [8] To maintain secrecy Michael Schmidt was registered in the hospital files as "XY" and listed on the death certificate as "unidentified." [9]

According to a 1991 expert opinion of the university clinic in Berlin-Steglitz, Michael Schmidt’s life could have been saved "with a probability bordering on certainty," had he been "brought quickly to a clinic and had immediate surgical measures been taken." [10] Charges filed by the Berlin prosecuting attorney for death by negligence were dismissed in March 1992 because it could not be accurately determined who was responsible for the late arrival of the ambulance and for the decision not to take him to a hospital closer by. [11]

Residents of the West Berlin district of Wedding were awoken at 3:15 in the morning by the shots fired at Michael Schmidt. West Berliner police officers and the French gendarmerie watched from a raised platform as the border guards searched the site and carried away the wounded man. [12] While the West German federal government, the West Berlin Senate and the western Allies reacted to the shots at the Wall "with outrage and strong protest," [13] East Germany celebrated the 38th anniversary of the border troops on December 1, 1984.

That morning Michael Schmidt’s parents noticed that his room was empty. When it was reported on western news later that day that an escape attempt, presumably fatal, had taken place near the Wollankstrasse S-Bahn station, they feared the worst. Very concerned, they went to the East German police in Bernau and to the nearby hospitals but were unable to find out anything about their son’s whereabouts. The East German secret police gave them the runaround for four days and the East German police took three days to accept their missing persons’ report. The authorities pretended to embark on a search campaign. [14] The parents were picked up by the East German secret police on December 4, 1984 and brought to the military state prosecutor’s office in Berlin where they were informed of their son’s death. They were lied to about the actual details surrounding his escape attempt and were told that their son had attacked a border soldier, so that he was "practically forced to engage in self-defense" by using his weapon. They were told that, "Despite all the medical efforts made," it was not possible to save the life of their son. [15]

The East German secret police pressured the parents to ensure that details about their son’s death would not spread in East Germany or reach the western media. It threatened to put an end to their other son’s studies and forbade them from having any contact with their relatives in the West. [16]

By mid-December 1989 Michael Schmidt’s father had already requested information from the East German state prosecutor concerning the circumstances of his son’s death, but the Berlin public prosecutor’s office did not open an intensive investigation until after the two German states had been unified. The two guards, who had been honored with the "Medal for Exemplary Service at the Border" and awarded bonuses on the same day that Michael Schmidt died, [17] were convicted of joint manslaughter by the Berlin district court on February 5, 1992 and handed down a suspended sentence of a year and six months and a year and nine months. [18] The court stated that "they hadn’t wanted to kill him, but they recognized the possibility that a shot might be fatal. Furthermore, they had been willing to take this risk in order to prevent the escape from being successful in accordance with their orders that they believed were binding." [19] Michael Schmidt’s death later served as one of the main counts of an indictment in a trial held against members of the Communist Party Politburo and the National Defense Council of East Germany. The trial resulted in a number of year-long prison sentences. Preliminary proceedings against the responsible East German state prosecutors and Stasi agents for aiding and abetting a crime and obstructing justice had to be dismissed for lack of sufficient evidence in 1998. [20]

Michael Schmidt was buried in the cemetery in Buch on December 10, 1984 under East German secret police surveillance. In addition to his relatives and close friends, almost all of his work colleagues attended the funeral. The Stasi regarded this as a provocation and had them reprimanded. [21]