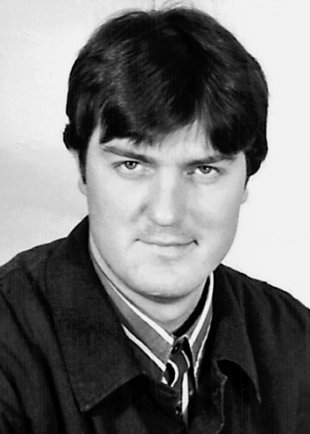 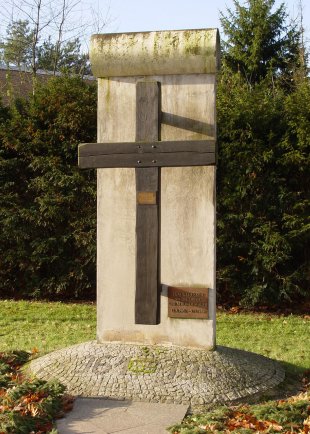 near Nohlstrasse
on the outer ring between Glienicke/Nordbahn (Oranienburg district) and Berlin-Reinickendorf
That night the 25-year-old man went through with his escape plan. It was 1:20 in the morning on November 24, 1986 when he approached the border grounds in Glienicke/Nordbahn. He had brought his personal documents that he would need in his new life in the West with him.Michael Bittner was born on August 31, 1961 in East Berlin. His father died early and he grew up with his mother and two siblings in Berlin-Pankow. After finishing school he completed a mason apprenticeship in a state-owned building repair company in Pankow. He spent much of his free time tending to masonry work on his mother’s house. [1]

In May 1980 Michael Bittner was called up to serve his military duty with the National People’s Army. [2] His mother recalled that he was often harassed there: „Michael landed in the bunker for the most minor offenses." [3] When Michael Bittner was released from the army in October 1981, he was a changed person. Looking back his mother described him as „quiet and introverted, sort of fearful and always ready to take off in case of a reserve enlistment." [4]

Michael Bittner: MfS photo of escape ladder at the Berlin Wall between Glienicke/Nordbahn and Berlin-Reinickendorf [Nov. 24, 1986] (Photo: BStU, MfS, HA I Nr. 5795, Bl. 114)
By April 1984 he had submitted an application to leave East Germany, which he hoped would be approved. [5] The state described his motives in a protocol, noting that he wanted „to be free and not have the state tell him what to do." [6] His request to leave was expressed very cautiously. The young man did not want to hurt the careers of his mother and siblings, nor did he want to be locked out of East Germany for an indefinite period after he emigrated. Hence, the East German secret police put him in the category of people wanting to leave that could be won back. He decided to flee after his petition to leave was repeatedly rejected. [7]

On November 23, 1986 Michael Bittner said goodbye to his brother, stating that his exit application had been approved but that he did not yet know when he could leave. He did not tell his brother or his mother about his plans to flee. [8] That night the 25-year-old man went through with his escape plan. It was 1:20 in the morning on November 24, 1986 when he approached the border grounds in Glienicke/Nordbahn. He had brought his personal documents that he would need in his new life in the West with him. [9] Using a wooden ladder he climbed over the interior wall and triggered an alarm. As he ran across the patrol path and security strip, the border guards, who were approximately 200 meters away, noticed him. Because the security strip in this area was rather narrow, Michael Bittner was able to quickly reach the last border wall. He leaned his ladder up against it and climbed up. The border guards fired directly at him just as he reached the top of the wall with his hands. Michael Bittner was hit in the back and fell backwards onto the ground. [10] „The bastard is hit" was the comment of one of the border guards, cited in eye-witness reports from the West. [11] At 1:50 a.m. the regiment doctor declared him dead. His body was soon taken to the military medical academy of the National People’s Army in Bad Saarow for an autopsy and then picked up on November 28, 1986 by a Stasi vehicle. There has been no trace of it since then. [12]

Alarmed by the bullet shots, residents of the West Berlin side went to the border and were able to look through holes in the Wall and see Michael Bittner being carried away. A short time later, members of the West Berlin police, customs officials and the French gendarmerie had also arrived and tried to photograph and film the crime site. [13] By early morning news of the failed escape attempt was reported on West Berlin radio. [14] Over the next few days, western media continued to report in detail on the events that had occurred in northern Berlin. [15] Both the Berlin Senate and the West German federal government condemned the use of guns at the Wall. [16] The head of the Bonn chancellery, Wolfgang Schäuble, spoke of a „burden on relations between the Federal Republic and East Germany" and demanded that the East German government do everything possible „to put a stop to every form of violence at the German borders." [17] The three western Allies also reacted with outrage at this „most recent use of brutal violence that demonstrates a total lack of respect for human life." [18]

Just three days after the deadly shots were fired at René Gross and Manfred Mäder, the Communist Party leadership feared that the incident of November 24 could further damage its reputation. „The political sensibility of the state border to Berlin (West) makes it necessary to cover up the occurrence. Rumors about the incident must be prevented from spreading and information about it should not be permitted to reach West Berlin or [the] FRG," the Stasi wrote in a report on July 1988. [19] Hence the East German secret police did everything in its power to conceal the death of Michael Bittner and to create a legend about his disappearance. The border guards and the medical staff involved had to swear in writing that they would not speak about it. The public telephone in the barracks was blocked. [20] In order to explain his disappearance to his family and also to intimidate them, the East German secret police concocted a connection between Michael Bittner and a „criminal human trade gang" that supposedly „used unknown channels to smuggle him out of East Germany" on November 26, 1986. [21] It even opened a fake investigation against the dead man and issued a warrant for his arrest on December 4, 1986 for „engaging in treasonous agent activities against his country" and for „crossing the border illegally." [22] The death certificate and autopsy report were destroyed, as was the proof of his cremation and burial. The East German secret police entered into the registration files of Berlin-Pankow that Michael Bittner had immigrated to West Germany on December 9, 1986. [23]

The uncertainty about the fate of her son continued to disturb his mother. In mid-January 1990, during the East German Peaceful Revolution, she requested information from the East German justice minister, Kurt Wünsche, about the disappearance of her son. [24] But a systematic investigation did not begin until after Germany had officially been reunified. At the end of 1997 the Berlin district youth court convicted both men responsible for shooting Michael Bittner to a youth sentence of one year and three months for manslaughter. The sentence was commuted to probation. The court was unable to determine whose bullets had hit and killed Michael Bittner, but was of the view that since both men had acted „consciously and jointly," they had to „assume responsibility for the bullets of the other." [25] Six months later the Berlin district court held another trial against the gunmen’s supervisors. One was sentenced to two years in prison; the other to ten months. Both sentences were commuted to probation. [26]

But even after the criminal proceedings were settled, Michael Bittner’s mother was unable to find peace. The body of her son was never located. She continues to hope "that someone still exists who was privy to what was going on at the time, and who has the courage to tell her, finally, after 30 years, what happened to Michael's urn." [27]