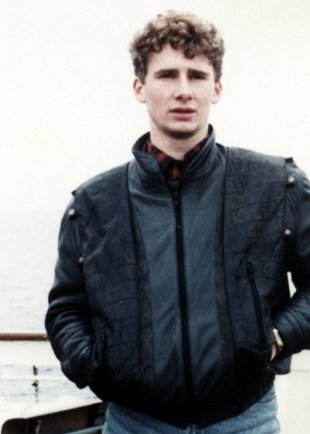 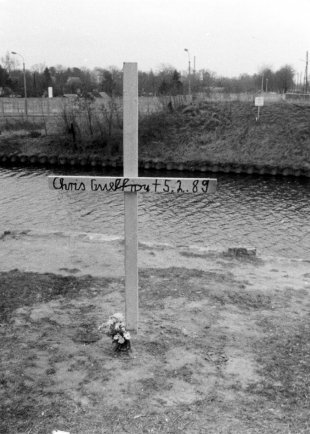 Christian G., injured, was arrested and sentenced in May 1989 to three years in prison for "a severe case of illegally attempting to cross the border." . [9]The West German government paid ransom to the Eastern authorities to have him released to the West in mid-October 1989. [10]

Many residents in the East and West heard the shots fired that night in the border territory. A West Berlin witness reported to the police that he heard at least ten shots and saw two men being carried away, one completely motionless. [11] West Berlin newspapers reported the next day on the failed escape attempt. [12]

Chris Gueffroy’s mother had also heard the shots. Two days later she paid a visit to one of his friends and learned that her son had been planning to escape and that the shots fired the night before may have been directed at him. That very evening she was picked up by the East German secret police to "clarify circumstances." During the hours of interrogation she learned that her son was dead. The Stasi agents told her that Chris Gueffroy had been seriously injured during an attack on an East German "military security zone" and had died "despite the immediate medical care" that he had been given. [13]

Although the East German authorities did everything in their power to keep the death of Chris Gueffroy a secret, his brother managed to send the eastern paper "Berliner Zeitung" an obituary that was printed on February 21, 1989, making reference to a "tragic accident" that had occurred on February 6. The western media made the connection between the deceased and the shots fired at the border. [14]

Chris Gueffroy was buried on February 23, 1989 at the Baumschulenweg Cemetery in Berlin-Treptow amidst tremendous public sympathy. Well over 100 people paid him the last honors under the watchful eye of the East German secret police. Although the East German secret police imposed massive control measures, [15] a few western correspondents managed to enter East Germany in order to attend the funeral and report on it. [16] That same day a memorial cross in honor of Chris Gueffroy was erected on the West Berlin side of the Teltow Canal in Neukölln. [17] Opposition groups in East Germany publicized the murder of Chris Gueffroy in an "open letter to the population of East Germany." That fact that his murder was still referred to as a "tragic accident" during the funeral sermon was described as a shameful demonstration of just how steeped in lies East Germany was. [18]

After the Berlin Wall fell on November 9, 1989, Karin Gueffroy left no stone unturned in her search for information about the death of her son. On January 12, 1990 she pressed charges against "persons unknown" with the East German general state prosecutor. [19] After German re-unification the Central Investigating Agency for Governmental and Party Crimes took over the investigation. The Berlin public prosecutor opened the case amidst great public interest on May 27, 1991. Four former East German border guards stood trial for the shooting of Chris Gueffroy. It was the first of many trials against guards who had shot at fugitives at the Berlin Wall and their commanders. The Berlin district court came to its verdict on January 20, 1992: The gunman was found guilty of manslaughter and sentenced to three and a half years in prison. [20] The other defendants were either given suspended sentences or were acquitted. The court justified the long sentence for the one gunman, Ingo H., with the explanation that he had "revealed a very high degree of callousness and abjection." [21]

The Federal Court of Justice overturned the verdict on March 14, 1994 and referred the case to another chamber of the Berlin district court to be retried. [22] It criticized the Berlin district court for not paying enough consideration to the fact that the gunman stood at the very bottom of the military hierarchy and, unlike the people in positions of responsibility who had yet to be held accountable for their actions, the guards "were to a certain degree also victims of the border regime." [23] The outcome of this case created a precedent for later verdicts. Almost all the subsequent trials followed the court decision to exonerate the gunmen. Ingo H. was the only defendant in this case to be sentenced to a two year prison term by the Berlin district court in a subsequent trial, a sentence that was commuted to probation. His guard leader was acquitted due to "insufficient evidence of intention to kill."

A memorial column commemorating Chris Gueffroy was erected at Britzer Zweigkanal in Berlin-Treptow in 2003 in honor of his 35th birthday. Britzer Allee between Treptow and Neukölln was renamed Chris-Gueffroy-Allee on August 13, 2010.