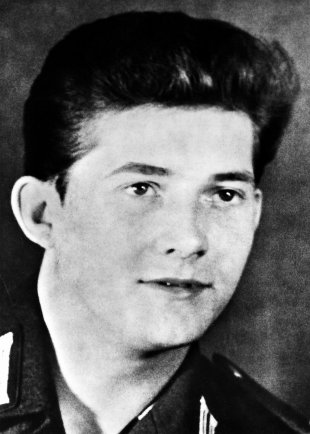 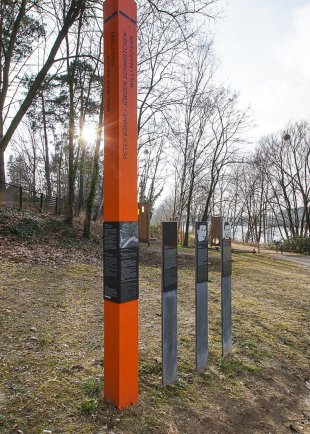 Jörgen Schmidtchen: Commemorative Column near the Wall Monument on Späthstrasse at the bank of the Griebnitz Lake (Photo: Dajana Marquardt)

at Gleisdreieck Griebnitzsee
on the outer ring between Potsdam-Babelsberg and Berlin-Zehlendorf
On the night leading into April 18, 1962, Jörgen Schmidtchen, who had achieved the rank of private, had been assigned to guard duty with the soldier R. in Potsdam-Babelsberg at a post called "Gleisdreieck." They began their shift at one o’clock in the morning on the inoperative S-Bahn grounds at the border to the West Berlin housing settlement "Kohlhasenbrück."The military border regime established by the East German leadership at the Berlin Wall did not only frighten people off: It bred counterviolence. In individual cases, fugitives, military deserters and escape helpers assisting others to flee used weapons against border guards in securing passage to West Berlin. There were also incidents in which members of the armed units guarding the border fortifications in and around Berlin were killed or injured. Jörgen Schmidtchen was the first border policeman to die while on duty at the border with West Berlin after the Wall was built.

He was shot by the cadet Peter Böhme who, with his comrade Wolfgang G., had tried to flee from Potsdam to West Berlin on the night leading into April 18, 1962. [1] The official version of what happened, a "legend" publicized with great fanfare in East Germany, claimed that Jörgen Schmidtchen was "murdered by an agent while trying to prevent an armed border breach." [2] During the East German era, he was celebrated as a martyr who had sacrificed his life for peace and fatherland. The following words were spoken at his military memorial service: "Our fallen comrade knew how important his duty was to preserving freedom. And he fulfilled this task conscientiously up to the last beat of his heart, thereby adding a glorious chapter to Socialist heroism. All your comrades will emulate you. Many border soldiers will be trained to follow your example of boldness, courage and heroism. […] You will live on through our deeds." [3] 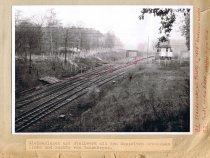 Jörgen Schmidtchen: West Berlin police crime site photo [April 18, 1962] (Photo: Polizeihistorische Sammlung/Der Polizeipräsident in Berlin)
The real Jörgen Schmidtchen got lost amid this kind of exploitative propaganda. Born and raised in Leipzig, according to official records, he began an apprenticeship as a galvanizer after finishing school. He then worked as a skilled laborer for the state-owned industrial plant in Ludwigsfelde, where he was distinguished as a young activist. [4] At the age of 19 he signed up to serve with the German Border Police. He was assigned to the "Grenzbereitschaft Blankenfelde," a police unit stationed in the south of Berlin that was responsible for guarding the border region between West Berlin and the East German district of Potsdam.

On the night leading into April 18, 1962, Jörgen Schmidtchen, who had achieved the rank of private, had been assigned to guard duty with the soldier R. in Potsdam-Babelsberg at a post called "Gleisdreieck." They began their shift at one o’clock in the morning on the inoperative S-Bahn grounds at the border to the West Berlin housing settlement "Kohlhasenbrück." Before starting duty they were informed that there was a search being conducted in Potsdam and its environs for two armed members of the NVA [National People’s Army] who had disappeared from an officers’ school. Evidently, when the guard leader Schmidtchen and his junior guard R. heard a noise at around 2:30 a.m., they did not make any connection to this warning. They left the former railway gatehouse they had been in to check out the situation and came upon two men in uniform. Later the soldier R. reported that Schmidtchen had assumed the two men were on duty patrol. He approached them unsuspectingly and spoke to them. Suddenly shots were fired. [5] Later it was determined that the bullets had come from the weapon of the 19-year-old cadet Peter Böhme, who had wanted to flee to West Berlin with his comrade, Wolfgang G. [6] Jörgen Schmidtchen fell to the ground and presumably died immediately. After the soldier R. returned fire, a shoot-out ensued during which Peter Böhme was also fatally wounded. Wolfgang G. however, remained uninjured and was able to make it safely to West Berlin. The next day he was quoted in the press as saying: "It was horrible. But we had no other choice. It was us or them." [7]

The commander of the 2nd Border Brigade to which Schmidtchen belonged concluded in his investigation report that Schmidtchen had acted imprudently. "The guard leader’s conduct was not in accordance with the circumstances at hand given the fact that the border guards had received detailed information about the situation, in particular about the search measures, and that the deserters were armed. His unguarded approach to the alleged duty guards demonstrates this." [8]

Not a single critical word was spoken externally by the military leadership about Jörgen Schmidtchen. A day after he died he was promoted to sergeant "for fulfilling his duty to secure the state border in an exemplary fashion." His parents received a one-time payment of 500 marks for financial support. [9] The funeral at the Leipzig-Schönefeld Cemetery was carried out with all the military honors. Over the following years streets and schools were named after Jörgen Schmidtchen, including the 33rd Polytechnic secondary school in Potsdam. As part of the border troops’ effort to foster tradition, commemorating a border soldier who was killed on duty was considered a high priority. In the "Walter Junker" troop formation, a memorial room and commemorative grove were established to remind future generations of border soldiers guarding the Wall between Potsdam and West Berlin that Jörgen Schmidtchen was one of the "unforgotten heroes of the East German troops." [10]