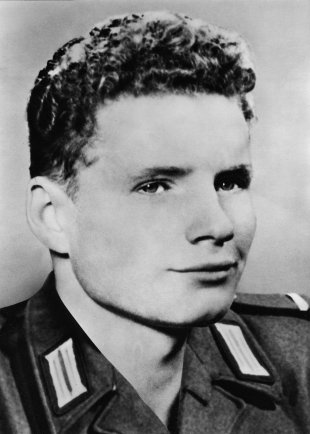 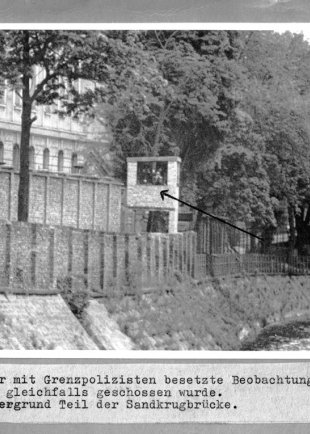 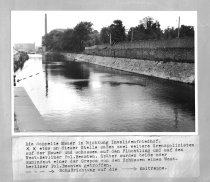 Peter Göring: West Berlin police crime site photo with positions of the East Berlin border police at the Spandauer Schiffahrts Canal near the Sandkrug Bridge marked [May 23, 1962] (Photo: Polizeihistorische Sammlung/Der Polizeipräsident in Berlin)
Given the ongoing East-West confrontation, Peter Göring’s death was politically explosive. The East German leadership reacted aggressively, placing the blame on the West Berlin Senate. It publicized a photo of the dead man lying on the ground and announced that he had been a murder victim of the „Frontstadt-OAS," a reference to the terror attacks of nationalist French Algerians. [2] One propaganda poster proclaimed that, with this „assassination," the „reactionary forces and their henchmen in the form of the front city police" once again demonstrated that they were „the enemy of our people." [3] Hand in hand with the damning of the enemy came the glorification of the dead man from their own ranks. It was propagated that „Peter Göring was young and had loved life, which is why he stood guard at the East German state border in Berlin." [4]

In a radio speech, Willy Brandt, the mayor of Berlin, expressed his support for the police officer who had assisted the defenseless fugitive. He also expressed his regret over the death of the border policeman. Peter Göring, he said, was a new victim of the Wall. „We don’t know what kind of man he was since the clichés and slogans of the other side do not tell us anything. But responsibility for his fate lies with those who built the Wall." [5]

The official version of Peter Göring’s life that was publicized throughout East Germany was, in fact, both vague and portentous. [6] Born in December 1940 to a working-class family in Dresden, Peter Göring was young when he experienced the hardships of a war that cost his father his life. He grew up in Dresden in a children’s home named „Weisser Hirsch." After finishing school he completed an apprenticeship as a cast fettler. He then began agriculture work in response to the party’s appeal to young workers to work the land. In April 1960, he apparently enlisted voluntarily to serve „honorary duty" with the „armed organs" of East Germany. He was transferred in June of the following year to the „anti-fascist protective wall" and, because of his readiness to serve, remained a role model for all comrades. [7] As a token of appreciation, he was posthumously promoted from private to sergeant. The inscription on the gravestone that Peter Göring was given after his state funeral in Luchau, Saxony advanced this view further: „He was shot perfidiously by West Berlin police while faithfully fulfilling his duty to protect the state border in Berlin." [8] Peter Göring’s mother was also integrated into the official commemoration of her son and continued to participate actively in it her entire life. [9]

Official documents from the East and West, however, show that the murder claim was a fabrication. Military and judiciary files, which were under lock and key in East Germany, prove without a doubt that Peter Göring was actively involved in the exchange of fire and was fatally hit while firing directly at the fugitive Wilfried Tews. In doing so, Göring violated the regulations that forbade arms from being used against children or directed at the West. Moreover, in opposition to the clear orders of his post leader, he left his watchtower in order to get into a better shooting position. [10] West Berlin investigation files reveal that on the other side of the canal, a police officer noticed the border guard who was shooting at that moment. The protocol stated that because the West Berlin officer felt threatened, he returned the fire, „upon which the Vopo [East German policeman] suddenly disappeared and presumably was fatally hit." [11] 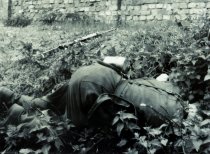 Peter Göring: fatally injured when shots were fired at a fugitive. The border guard was struck by a ricochet bullet fired from the pistol of a West Berlin police officer (May 23, 1962) (Photo: BArch, VA-07/16925)
The exchange of fire was in full swing when he was shot. After the sound of the last shot trailed off, the lifeless body of the border guard was found between two walls that blocked access to the river bank. [12] The forensic investigation in East Berlin determined that the bullets that hit and killed Peter Göring had not been fired directly. The injuries were caused by a ricochet bullet that had bounced off one of the walls. [13]

The investigation was re-opened in the 1990s. Whatever charges had been made against the West Berlin policeman who was believed to have fatally injured Peter Göring were dropped in July 1991 with the explanation that since he had fired his gun to protect himself and the fugitive, his conduct was justified as an act of self-defense and emergency assistance. [14] Three former East German guards were accused of attempted manslaughter of the fugitive Wilfried Tews, which led to a trial in June 1996. [15] But during the main proceedings the court was unable to determine which guard had fired the shots and the defendants were acquitted. [16]

The court concluded in its decision that the shots that injured Wilfried Tews, causing him to suffer from their consequences for the rest of his life, may even have been fired by Peter Göring. But this could not be proven with any certainty.