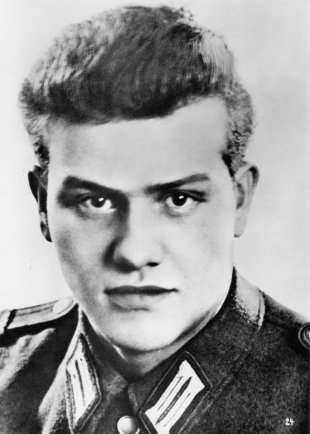 Reinhold Huhn was the youngest child of a farmer family living in Braunsberg, East Prussia. His mother died in an accident when he was three years old. At the end of 1946 the family was forced to leave East Prussia, which then belonged to Poland, and find a new home in Adorf, in Vogtland. After completing his schooling, Reinhold Huhn trained to become a cattle breeder and later worked on a state-owned farm in the Plauen district. When he was 18 he enlisted with the police force and began his service in Karl-Marx-Stadt - now Chemnitz - in September 1960. In June 1961 his unit was transferred to East Berlin and involved in constructing the Wall. Afterwards he belonged to the East Berlin border brigade. [39] 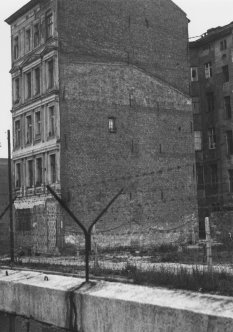 Reinhold Huhn: West Berlin police photo of the escape building on Zimmerstrasse [June 18, 1962] (Photo: Polizeihistorische Sammlung/Der Polizeipräsident in Berlin)
On the afternoon of June 18, 1962, Reinhold Huhn, as a guard of the 4th Border Division, was stationed in the middle of the city at the corner of Jerusalemer Strasse and Zimmerstrasse. The border fortifications here ran right through Berlin’s former newspaper district. Not far away on the West Berlin side, the Springer Verlag was building its new publishing house. Reinhold Huhn had been standing guard at the border strip with his guard leader, Private H., since 3 p.m. that day. [40] At about 5:20 p.m. they saw a man approaching from the East Berlin border house at Zimmerstrasse 56. [41] The building, blocked off with barbed wire fencing, was still inhabited on the upper levels, but the ground floor had already been evacuated and the front door was sealed shut. The building could only be entered from the back courtyard on Jerusalemer Strasse. Since the man was heading towards the East Berlin city center, the two border guards were not suspicious at first. But when he returned an hour later with two women and two children, the guard leader ordered Reinhold Huhn to conduct an identity check. He approached the people in the border strip and demanded through the security fence that they show their papers.

Reinhold Huhn: West Berlin police photo of the dead man lying on the border strip [June 18, 1962] (Photo: Polizeihistorische Sammlung/Der Polizeipräsident in Berlin)
The man who had been observed by the border guards was named Rudolf Müller. He was a former border-crosser (someone who commuted across the border daily to work) and had lived apart from his family in West Berlin ever since the Wall had been built. He was planning to bring his wife, their two children and his sister-in-law through a tunnel to the west side of the city that afternoon. After other escape plans had failed, he dug underground for many weeks with his brothers and other helpers until the tunnel, which ran from the grounds of the Springer Verlag to the basement of the building at Zimmerstrasse 56, was finished. [42] Rudolf Müller later described what happened: When Reinhold Huhn approached the small group, Rudolf Müller had his family continue on. To dissuade the young border guard from carrying out his security check, he told him that they were on their way to a birthday party. [43] But when the guard went to carry out his orders anyway, Rudolf Müller reached into the inner pocket of his jacket, pulled out his pistol and pulled the trigger. Hit in the chest at close range, Reinhold Huhn fell down and bled to death. [44] The guard leader H. immediately opened fire on the fugitives, who still were able to get through the tunnel and reach West Berlin safely.

Two days later the East Berlin authorities demanded Rudolf Müller’s extradition. [45] They had no doubt that he was responsible for the death of Reinhold Huhn. The West Berlin Senate aligned itself with Rudolf Müller, who was immediately flown to West Germany with his family. [46]

Rudolf Müller told the West Berlin police that he had only hit the border guard, causing him to fall down, and that the fatal shot had come from the other border soldier who had shot at the fugitives. Believing Rudolf Müller’s version of the events, the western media accused the second guard of having killed his comrade, depicting him as a „trigger-happy Vopo" [East German policeman]. [47] The investigation opened in West Berlin against Rudolf Müller was closed in November 1962. [48]

East Germany chose to see a malicious act of murder and declared Reinhold Huhn a victim of western warmongers. [49] The Communist Party had all the East Berlin border units conduct role calls and assemblies during which it was claimed that „the cowardly and malicious murder attack" had been ordered directly by Adenauer and Brandt and was the „fault of the blood-stained German military." [50] The border troop leaders were instructed to organize a politically demonstrative funeral ceremony. [51] Reinhold Huhn’s body was laid out in the barracks of his unit in Berlin-Rummelsburg. Soldiers, officers and delegates from factories and schools were called on to bid farewell at the open coffin. Reinhold Huhn was buried in his hometown of Adorf in Saxony with military honors. [52]

A year later the East Berlin city commander Poppe dedicated a memorial plaque at the site where Reinhold Huhn had been shot. [53] In the 1970s this site on Jerusalemer Strasse was expanded into a central memorial for border soldiers who died while serving at the Berlin Wall. Schützenstrasse, a nearby street, was renamed Reinhold-Huhn-Strasse in 1966. After East Germany ceased to exist, the memorial was removed and Reinhold-Huhn-Strasse again became Schützenstrasse.

At the end of the nineties, the death of Reinhold Huhn once again made the headlines. Following a long and drawn out trial, Rudolf Müller was charged by the Berlin district court in April 1999 with manslaughter and sentenced to a year in prison commuted to probation. [54] In the main court proceedings, he admitted to having shot Reinhold Huhn, but claimed it was in self-defense. The court, however, came to the conclusion that the act was not justified by either self-defense or emergency assistance to others. According to the verdict, Reinhard Huhn at no time threatened the life and health of Rudolf Müller and his family.

Both the convicted man and the relatives of Reinhold Huhn appealed the decision. Rudolf Müller hoped to be acquitted; Reinhold Huhn’s relatives said they wanted a just evaluation of the crime. In 2000 the Federal Court of Justice revised the verdict, finding Rudolf Müller guilty of murder, but it did not change the original sentence. The court found that „in the concrete crime situation in which the border guard wanted only to perform a security check, it recognized malice, an objective prerequisite characteristic of murder" and pointed out the „outstanding significance of the legally protected right to life." [55]

The court’s decision remains controversial today. Rudolf Müller felt that the conviction equated him with a cold-blooded murderer. Reinhold Huhn’s relatives could not understand the mild sentence, given the legal assessment of the crime. [56] The chief judge’s hope that she had found a „penalty that would satisfy" all was not fulfilled. [57] 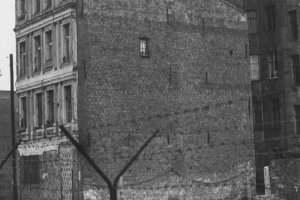 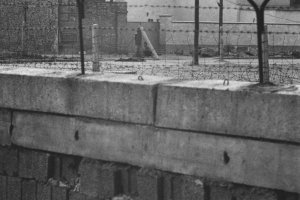