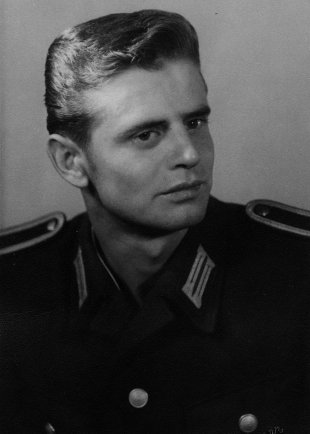 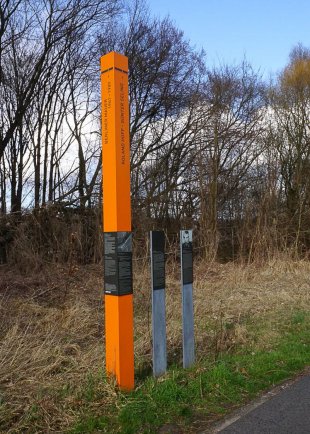 Günter Seling: Commemorative Column at the bank of the Teltow Canal between Zehlendorfer Damm and Paul-Gerhardt-Strasse (Photo: Dajana Marquardt)

shot on September 29, 1962
in Teltow-Seehof
at the southwest outer ring

died from his bullet wounds on September 30, 1962
Günter Seling’s job was to conduct what was called a "post control," to check on the border guards on duty without warning to see if they were conducting themselves according to regulation. Apparently when he approached the soldier W., he made a noise to draw attention to himself."It has now been announced that a member of the Soviet zone border troops was buried with military honors last Friday at the Stahnsdorf Cemetery near Berlin. The soldier was shot by a comrade who, due to the thick fog, mistook him for a fugitive." [1] That was how the West German newspaper "Die Welt" reported the death of an East German border soldier in October 1962. In the "Tagesspiegel," a West Berlin paper, it was noted: "The West Information Office has reported that last Friday a member of the Soviet zone border troops was buried with ‘military honors’ at the cemetery in Stahnsdorf near Berlin. He was shot early Tuesday morning by a comrade on duty who, because of the thick fog, assumed that he was a fugitive and shot him." [2]

The victim, 22-year-old Sergeant Günter Seling, was born on April 28, 1940 in Stahnsdorf near Berlin, where he lived with his parents until his death. Günter Seling had been serving in the National People’s Army since April 1959, having joined the military before the general draft was introduced in East Germany. At the time of his death he belonged to the Heinersdorf border military unit that was stationed on the southern edge of the city, on the border between West Berlin and Teltow.

On September 29, 1962 he had been assigned patrol duty as guard leader. The border troop reports show that at about 5 o’clock in the morning he approached the guard area of soldier W. [3] Visibility was poor; a thick fog had set in. Günter Seling’s job was to conduct what was called a "post control," to check on the border guards on duty without warning to see if they were conducting themselves according to regulation. Apparently when he approached the soldier W., he made a noise to draw attention to himself. In response W., the 19-year-old soldier, loaded his machine pistol, because he thought it might be someone trying to flee.

What happened next is described differently in various documents. The report that the commander of the 2nd Border Brigade prepared for Erich Honecker, the Communist Party Politburo member responsible for security issues, stated that, as the gun was being loaded, a sheaf of fire, four bullets in total, was released from the MPi, critically injuring Sergeant Seling in his head." [4] According to this version, the shots were fired by accident.

The report of the city commander of Berlin of the previous day suggested that W. had aimed and fired the shots intentionally. The report stated that the moment Seling approached, "without calling out or firing a warning shot, W. responded to a noise with four shots of continuous fire from the MPi, thereby severely injuring Sergeant S. in the head." [5] Günter Seling was quickly taken to the nearest hospital in Kleinmachnow and operated on immediately. He died from his injuries at three in the morning.

The victim was granted a funeral "with all the military honors" while the soldier W. was taken into custody and subjected to an interrogation by the military state prosecutor for negligent use of a weapon. [6] The documents do not reveal the outcome of the proceedings. After the state of East Germany ceased to exist it was not deemed necessary to try the gunmen. The Berlin public prosecutor in charge of the preliminary investigation in 1994 saw "no indication of a deliberate killing or violent offense" and concluded that "with regard to the law," the act presents an example "merely of involuntary homicide." [7]

With hindsight and independently of the question of the soldier W.’s personal guilt, it was possible to determine that it was the special conditions at the border and in the East German border troops that had been responsible for Günter Seling’s death. He was shot because he was mistaken for a fugitive when he approached the border guard. Günter Seling’s death shows that the pressure on guards to prevent so-called "border breaches" and, if necessary, to use their weapons to do so, was so immense that in cases of doubt border guards even shot at their own comrades.

Border guards who succeeded in fleeing to the West in the 1960s reported on the fatal incident but did not reveal the identity of the victim. They attested that at that time the accident had been reported on at duty assemblies in the neighboring border companies. According to these reports, a soldier had accidentally shot a sergeant who he thought was a fugitive. [8] In September 1968, on the basis of witness testimonies, this death was added to the list of "victims of the Wall" maintained by the West Berlin police headquarters. [9] In contrast to the other border soldiers who were killed, Günter Seling was not publicly mourned in East Germany. Evidently, this did not appear opportune to the political and military leaders, given the circumstances of his death.