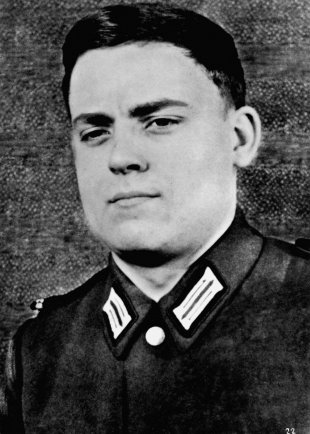 on the sector border between Berlin-Treptow and Berlin-Neukölln

Siegfried Widera belonged to the 5th company of Border Regiment 42, which was responsible for guarding the border in the southeast of the city between the districts of Treptow and Neukölln. On the evening of August 23, 1963, the 22-year-old corporal was posted with Sergeant T. on the Massante Bridge that was blocked off by the Wall and barbed wire. At the time, canal excavation work was being carried out on the East Berlin side and construction workers were often seen working there during the day. Although the construction work had stopped in the early evening, Siegfried Widera and his junior guard did not suspect anything at 7 p.m., when three men began tampering with an excavator. They were wearing workers’ suits and Sergeant T. later reported that it looked as though they were repairing the excavator. [27] In truth they were employed by a state-run company that was conducting the excavation work and had access to the border territory for a number of weeks. The workers were hoping to take advantage of this situation and flee to West Berlin. They engaged the two border guards in a conversation and soon realized that the two men were completely unsuspecting. Nonetheless, the fugitives felt they had no choice but to knock the two guards out so that they could get by them, cross the bridge and reach the other side of the city. [28] 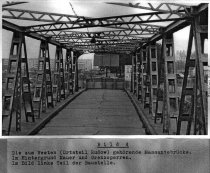 Siegfried Widera: West Berlin police crime site photo of the Massante Bridge between Berlin-Treptow and Berlin-Neukölln [Aug. 23, 1963] (Photo: Polizeihistorische Sammlung/Der Polizeipräsident in Berlin)
Before they realized what was happening, Siegfried Widera and his assisting guard were knocked down with fists and an iron rod. Then the fugitives ran past the barriers on the Massante Bridge and, although the guard T. began shooting at them, they reached the West Berlin bank on the other side uninjured. The next day West Berlin press reported how they had cleverly outmaneuvered the border guards. [29] The West did not yet know that Siegfried Widera had been badly injured and was in critical condition. He had suffered a fracture to the base of the skull and died two weeks later on September 8 in the Köpenick Municipal Hospital, probably having never regained consciousness. [30] 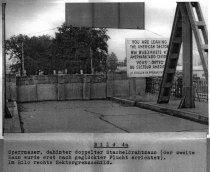 Siegfried Widera: West Berlin police crime site photo of the border fortifications at the Massante Bridge between Berlin-Treptow and Berlin-Neukölln [Aug. 23, 1963 (Photo: Polizeihistorische Sammlung/Der Polizeipräsident in Berlin)
Citing the press office of the East German Ministry of National Defense, the Communist Party newspaper, "Neues Deutschland," stated that the fatal injuries were inflicted on him by "Girrmann bandits." This baseless accusation was a reference to one of the most successful West Berlin groups involved in helping people escape to the West. But East Germany used the propaganda as a way to conceal the truth and the fact that violence had been employed against border guards. Instead, they fabricated their own version of what happened, creating a "legend" that was upheld at all the memorial events in honor of Siegfried Widera. The story stated that "wirepullers," those behind the crime, also had "Jörgen Schmidtchen, Peter Göring and Reinhold Huhn on their consciences." [31] But the concluding report of the border troop leadership clearly shows that internally the events were evaluated quite differently. It stated that "Widera and the other guard had acted in violation of their orders, had been overly trustful and that this had contributed to their being besieged and to the escape operation’s success." [32] This view of the situation was conveyed to the border soldiers of the unit in the obligatory "evaluation" and was incorporated into police classes to encourage discipline and alertness among the border soldiers.

Siegfried Widera, who was born in 1941 in Silesia and grew up after the war in Mansfelder Land on the edge of the Harz Mountains, was nonetheless glorified in East Germany as a hero of the "socialist fatherland." He had worked as a lathe operator, and official reports claimed that he joined the border service voluntarily in October 1960. In the annals of the East German border troops it was written that "on the historical day of August 13, 1961" he was "assigned to the anti-fascist protective barrier in Berlin" and that he always fulfilled his duty with courage and determination. [33] He was still a corporal when he died but was posthumously promoted to sergeant. [34] Siegfried Widera had been married just weeks before he died. His widow was expecting a child. During the public mourning ceremony on the market square of the mining town of Hettstedt, she was handed a letter of condolence from state and party chairman Walter Ulbricht. [35] Siegfried Widera was buried with military honors in nearby Gorenzen, his wife’s hometown.

After the East German media reported in detail on the funeral ceremonies for the border soldier, the West German authorities opened an investigation against the fugitives. The men asserted that it had not been their intention to harm Widera. One of them testified that in no way had they planned to use violence. "Violence was supposed to be completely avoided. Our motto had been to get over the fence unnoticed." [36] Another stressed that "I was very unhappy to learn that a young man had to die because of my actions. […] I am distraught by the whole thing and can’t cope with it, although I know I acted in an emergency situation." [37] The charges were dropped in April 1969 because it had not been possible to prove that the fugitives’ actions were premeditated or that they had committed joint homicide. [38]

After the East German state ceased to exist, the Berlin public prosecutor’s office reopened the case. This time the investigation was focused on the former guard, T., who had opened fire at the fugitives although he had suffered a concussion. But based on Stasi files, it had to be assumed that he was only half conscious when he fired his weapon and thus no charges were brought against him either. [39] 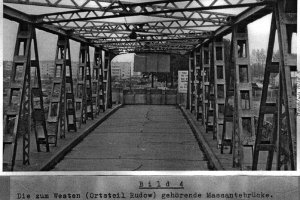 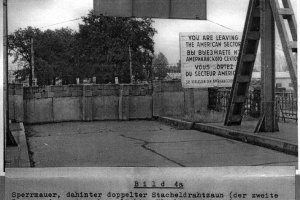