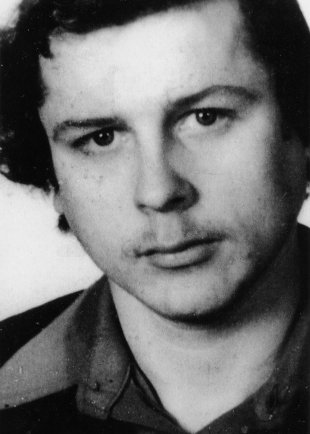 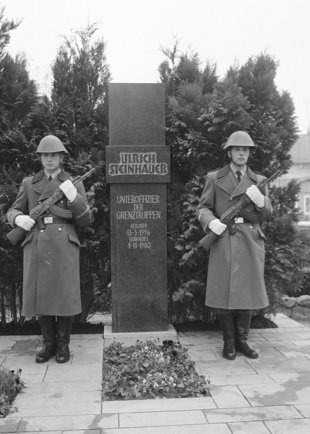 Ulrich Steinhauer, born on March 13, 1956 in Behrenshagen in the Ribnitz-Damgarten district at the Baltic Sea, grew up as the third of five children. His father was a warehouse clerk in the state-owned fiber board factory in Ribnitz-Damgarten. His mother, a housewife, raised the children. From 1962 to 1970 Ulrich Steinhauer attended elementary school in Behrenshagen and the Rudolf-Harbig Secondary School in Damgarten. After completing his carpenter apprenticeship in the farming intercompany in Damgarten in 1973, the company hired him as a skilled worker. His youngest sister Ilona described her brother as a frugal youth who saved his money to go on vacation. Every summer he took a trip through East Germany with a tent. [61] 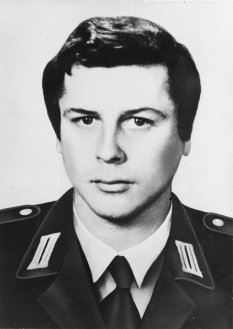 Ulrich Steinhauer; date of photo not known (Photo: Berlin Wallarchiv Hagen Koch)
In November 1979 Ulrich Steinhauer was called up for military service with Border Regiment 40 in Oranienburg. Although the family maintained casual contact with people in the West – the mother’s brother had lived in West Germany since 1961 – and the parents were not members of the Communist Party, the border troops were apparently convinced that his background – coming from a large working-class family from the coast – was assurance enough that he could be trusted to serve reliably at the border.

"Now almost a year has passed," Ulrich Steinhauer wrote in a letter to his parents in April 1980. "Time seems to fly by. My time in the army can’t be over soon enough. Next year at this time the world will look quite different." [62]

After completing basic training he was assigned in May 1980 to Border Regiment 34 in Gross Glienicke in the north of Berlin. [63] Like most of his comrades, he was not an enthusiastic border soldier and counted the days until his release. "Only in a very extreme situation" would he use his weapon, Ulrich Steinhauer told his superiors in the border regiment, who criticized him for being "too quiet" and for not doing more "than what he thought was right." [64] He had told his sister Ilona that he wanted to put his 18 months of military service behind him without ever having to shoot at anyone and he hoped he would never find himself in that kind of situation. One thing her brother said remained particularly vivid in her memory: "You never know who you are standing there with. Is he my friend or my enemy?" [65] On November 2, 1980 he wrote his parents and sister that he had become a private and guard leader. He ended the letter with: "172 more days. Waiting for an answer." [66] By the time his letter was delivered to the family on November 7, Ulrich Steinhauer had already been dead for three days. 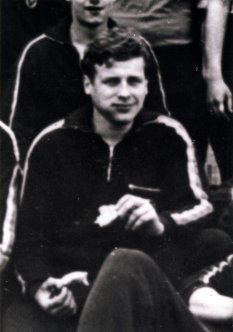 Ulrich Steinhauer; date of photo not known (Photo: BArch, GTÜ 10676)
November 4, 1980 was a cold autumn day. Ulrich Steinhauer was assigned to serve duty from 1 p.m. to 9 p.m. as guard leader at the Staaken-Schönwalde border section, across from Eiskeller in the West Berlin district of Spandau. [67] He was scheduled together with Egon B. who had just recently been assigned to the unit in Gross Glienicke. Ulrich Steinhauer had no idea that his junior guard was planning to flee to the West and that he had singled out this particular border section to carry out his plan. At their first meeting Ulrich Steinhauer made a friendly impression on Egon B. – not like the other "harsh" guard leaders. He later explained that this had led him to hope that his guard leader would not get in the way of his escape. [68]

They were both controlled during a routine check early that afternoon. [69] Egon B. thought he was safe from any further checks after that. It was just past 4 p.m. when he embarked on his plan. According to regulation, Ulich Steinhauer, as guard leader, should have been patrolling a few meters to the right or left behind his junior guard. If the facts presented by Egon B. are to be believed, Ulrich Steinhauer must have been walking a few meters in front of him when B., unnoticed by his guard leader, pulled a plug to deactivate the border communication system. [70] Then he unlocked his gun and loaded it. Startled by the noise, Ulrich Steinhauer supposedly turned towards him. "Don’t fool around," he said to his junior guard and removed his own machine gun from his shoulder. [71] "I am taking off now, throw down your weapon!" Egon B. later reported having called out to him while shooting two shots over his head as a warning. [72] But instead of throwing off his weapon, Egon B. claimed that Ulrich Steinhauer pointed his gun at him and that Egon B. responded by firing five shots. But the bullet that badly injured Ulrich Steinhauer, causing him to collapse, was not fired from the front. The bullet that pierced his heart had entered from his back. He died before a doctor arrived. [73] 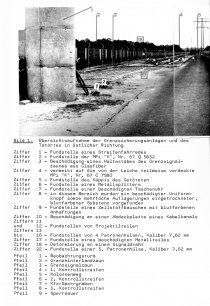 Ulrich Steinhauer: MfS crime site photo of the border strip between Schönwalde and Berlin-Spandau with caption (I) [Nov. 4, 1980] (Photo: BStU, MfS, HA IX Nr. 967, Bl. 17)
Border soldiers soon dragged the dead man and his weapon out of the death strip, but a short time later their superiors ordered them to return the body to the area where it had been found. [74] These circumstances, and the fact that the border guards could not recall where they had found which weapon, made it highly unlikely that the results provided to West Berlin by the East German general state prosecutor had been attained through a reliable forensic investigation. [75] The dead man was kept on the ground in the border strip on view to western media for an entire day – allegedly this was necessary in order to reconstruct the case.

Egon B. rode his military bike through the border strip to an area where the Berlin Wall was lower than usual. He leaned his bike against it, stood on top of the bike saddle and climbed over the final barrier to West Berlin. [76] He went right to the West Berlin police and reported what he had done and was taken into police custody. The West Berlin public prosecutor rejected the East German state prosecutor’s request to have him extradited to East Germany, explaining that in East Germany, young adult perpetrators between the ages of 18 and 21, regardless of their development, are tried not as youths but as adults. Experience had shown that East German law did not take into account the German criminal law relating to youthful offenders, in particular "that a young person between the age of 18 and 21 cannot be held responsible for his actions in the same way as an adult can." [77] In response to a formal request, the East German attorney general provided the West Berlin authorities with large amounts of evidence, but it was limited in its usefulness given the failure to effectively secure the crime site. [78]

The West Berlin public prosecutor’s office was certain that Egon B. had not acted impulsively, that his crime had been well-prepared and that he had fired his gun intentionally. The five shots were fired in quick succession – not leaving any time for the dialog that Egon B. claimed took place with his victim. [79] Because the shot into his back demonstrated malice, he was charged with murder.

But the Berlin district youth court found that it had not been sufficiently proven without a doubt that the deadly shots in the back were fired first. For this reason for the main court proceedings the charge was reduced from murder to manslaughter. [80] In the fall of 1981 the youth court found Egon B. guilty of manslaughter and sentenced him as a youth to six years in prison. [81] The court rejected the defense’s claim of a "justifiable emergency," explaining that B.’s interest in fleeing without conflict did not outweigh Ulrich Steinhauer’s interest in staying alive. In a conflict between freedom and life, life takes priority, [82] the court stated, adding that his self-serving conduct shifted the crime "very close" to murder. [83]

The defendant appealed the verdict, leading the Federal Court of Justice to lift the sentence and refer the case to another youth court, which ultimately confirmed the six-year prison sentence in June 1982. [84] In early February 1983 the sentence was once again appealed successfully to the Federal Court of Justice and retried a second time by the Berlin district court, which commuted the sentence to four years and nine months probation. Its decision was based on the fact that the defendant’s conduct demonstrated that he deeply regretted his actions and was completely aware of the breadth of his guilt. [85] The Berlin Superior Court of Justice had already granted his early release from prison in June 1982. [86]

The East German secret police continued to treat the "murder" case of Egon B. as an operative procedure. With the help of informants from the West, the Stasi was kept up to date on all the details of his new life in West Germany. [87] A plan was made to have him "transferred" back to East Germany after which threatening letters were to be employed to try to manipulate him into committing suicide. [88] 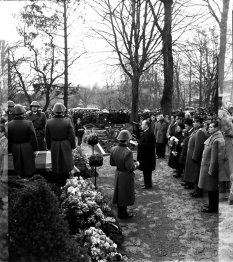 Ulrich Steinhauer: Funeral at the Alten Friedhof in Ribnitz-Damgarten, Nov. 12, 1980 (Photo: Bundesarchiv, Image 183-W1112-043, Photographer: Herbst)
Ulrich Steinhauer was posthumously promoted to sergeant. He was awarded a combat medal "for service to the people and fatherland" by the East German defense minister, Heinz Hoffmann, in "honor of his exemplary and self-less fulfillment of his duty." The FDJ youth association awarded the deceased the "Arthur-Becker-Medal" in gold. He was buried with military honors on November 12, 1980 at the Old Cemetery in Ribnitz-Damgarten. [89] The funeral service was organized by the authorities; the family had no say in the matter.

A border company, a school, a memorial boxing tournament, streets and work collectives were named after Ulrich Steinhauer. On his birthday and on the anniversary of his death, and on the "day of the border troops," a wreath was placed on his grave. His death was politically exploited and his relatives were unable to stop this. "That was a huge burden to us, especially for mother," Ulrich Steinhauer’s sister Ilona recalled. "My brother was only doing his service. They took him from us a second time when they turned him into a hero." [90] 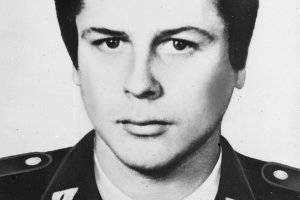 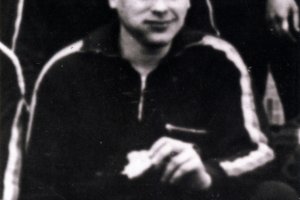 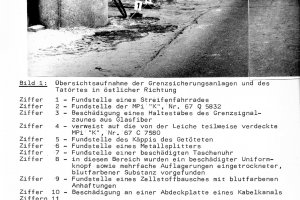 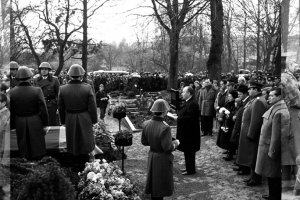