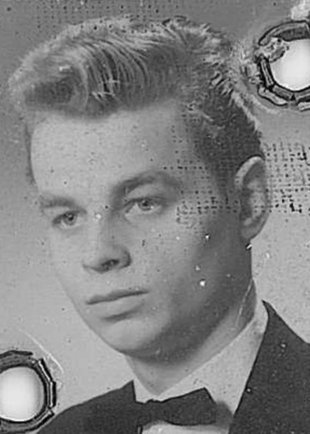 
in the Spree River
at the sector boundary between Berlin-Friedrichshain and Berlin-Kreuzberg
For years, Hans-Joachim Zock was harassed by the State Security. On November 13, 1970, he bought a ticket from Halle to East Berlin and tried to escape across the Spree. His body was not found in the water until weeks later.The East Berlin water police pulled a body out of the Spree on December 17, 1970. The dead man, who was found near the heating plant in Mitte, was wearing dark blue tights, a dark green sweater, black leather gloves and a grayish-black scarf. Underneath he was wearing a white shirt with cufflinks and a tie. [1] His personal documents, including an East German ID card, a driver’s license, several photographs of a child – presumably his son – and a stamped letter addressed to his aunt in West Germany, had been packed watertight in the left leg of his stocking. On the basis of these documents it was determined without a doubt that the dead man was Hans-Joachim Zock, who had been registered as missing since November 24, 1970. [2] The letter he was carrying revealed his plans to flee East Germany by swimming across the Spree to West Berlin.

Hans-Joachim Zock was born in Berlin on January 26, 1940. He last resided in Halle-Neustadt. [3] Everything that is known about him comes from the files of the Stasi and thus reflects the secret police’s tainted view of a “Republic fugitive.” Hans-Joachim Zock was employed from April 1, 1955 until late August 1956 as a page and waiter apprentice in the guesthouse of the East German government in East Berlin. Before he was approved and hired for this position, he was investigated and registered by the secret police’s department of personal security. According to the Stasi, his work discipline deteriorated after he began going to the movies in West Berlin with other apprentices. His alleged lack of discipline ultimately led to his dismissal. Zock continued his training with the HO (trade organization) restaurant in Berlin-Mitte on September 1, 1956, [4] but he did not complete his apprenticeship there either. Hans-Joachim Zock moved to West Germany on December 21, 1956 and settled in Bad Salzuflen near Bielefeld. He returned to East Berlin three and a half years later, on June 23, 1960. [5] The Stasi files reveal that criminal charges were held against him in two cases in East Germany, but no further information was provided: On March 3, 1961 he was sentenced by the Berlin-Friedrichshain district court to six months in prison for aggravated assault. The sentence was commuted to two years of probation. [6] On November 25, 1965, the local court of Rügen sentenced him to ten months in prison for “ongoing embezzlement in coincidence with ongoing fraud to the disadvantage of societal property.” [7] This sentence was also commuted to two years of probation. He was employed at the VEB Buna Chemical Plant from January 1, 1965 to early summer 1970. In April 6, 1965 he worked as a loader in the polystyrene plant and on October 1, 1967, began work as a “tapper” in the carbide factory. Although he was a member of the workers’ militia and a member of the FDJ leadership, the communist youth organization, in the factory, he repeatedly became a target of the secret police in the second half of the 1960s. When machinery was damaged in the polystyrene plant in 1965, he was added to the list of suspects. An eyewitness had stated that he had been at the damaged machine just two hours before the incident occurred “although this was not his work site.” [8]. This led the secret police to interrogate Hans-Joachim Zock for four to five hours and keep him under “operative control.” During a second sabotage incident in October 1965 he was again held under suspicion, although no evidence existed against him. Again he was subjected to many hours of questioning, which failed to bring forth any leads. The perpetrator was never caught. After the workers’ militia gunroom was broken into, Hans-Joachim Zock’s “non-transparent” attitude led the Stasi to conduct a covert investigation of his alibi. His colleagues, including those who were close to him, were questioned. The Stasi noted that although the investigation was supposed to remain a secret, Hans-Joachim Zock learned about it from someone who was a bit too “chatty.” The perpetrator was later identified and found to have no connection to Zock. In February 1970, FDJ brochures in the FDJ leadership office in the Buna Carbide plant were smeared with graffiti criticizing the meeting taking place between German Chancellor Willy Brandt and GDR Prime Minister Willi Stoph in Erfurt. Hans-Joachim Zock was once again held under suspicion, evidently as a matter of routine. He was interrogated for hours and kept under “operative processing,” even after the offender was identified. [9]

After receiving two reprimands, Hans-Joachim Zock was dismissed from his job without notice on May 20, 1970 for alleged “repeated offenses against work discipline.” [10] Five days later he took a new job as a waiter in the HO restaurant in Halle. Stasi reports describe repeated drinking on the job – and an incident in which he allegedly tried to cheat a wedding party when the bill was paid. He stopped showing up for work in early August 1970 which led to his immediate dismissal on August 17. [11] According to the Stasi, he didn’t hold a regular job after that.

Hans-Joachim Zock left his apartment in Halle-Neustadt at about 1:30 p.m. on November 13, 1970. He left, saying he was going to look for new work. [12] Four days later a light gray coat and a synthetic suit were found on the riverbank of the Spree, on the grounds of the Berlin Building Material Company, Plant III. After his body was found, there was no doubt that these were his clothes. A train ticket for a trip from Halle to Berlin that was purchased and used on November 13 was found in the coat pocket. The Stasi later discovered that he had met a relative of his first wife in a bar in East Berlin from 5 p.m. to 1 a.m. on the evening of November 13, 1970. He had told her that he was traveling on business and stopping in East Berlin because he missed his child and wanted to visit him. He apparently talked mostly about personal problems that evening. Hans-Joachim Zock said that he had stored his luggage in a hotel room at the Ostbahnhof station and that he planned to return to Halle on Sunday. According to his first wife’s relative, when he left the bar, he was not drunk and his bill had only come to 1.50 marks. [13] The autopsy found that his death had occurred sometime between November 14 and 17, 1970. Four to six weeks passed before his body was discovered. It was presumed that his death was caused by drowning since there were no other injuries or organ damage. [14] What ultimately led Hans-Joachim Zock to attempt to flee through the cold water of the Spree can no longer be determined. But what is clear: for years he was subjected to harassment by the Stasi. Whenever problems arose in the factory, he was automatically added to the list of suspects although he was never found guilty. Even the Stasi concluded in the end: “In all the interrogations with Zock, a crime was never determined.” [15]

In the letter to his aunt that he had on him and which was dated November 12 – the day before he left for East Berlin – he announced his plans to escape and explained his motives: “…a few inexplicable repairs were caused at work recently, it was assumed to have been sabotage. You can imagine what followed: secret police interrogations many times over, lasting 15 hours after working a 12-hour shift.” [16] He believed the Stasi’s mistrust of him was caused by the fact that he had lived in West Germany for a time. He was denied the chance to return there.