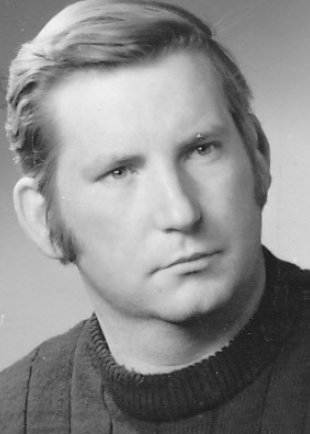 in the Spree River east of the Oberbaum Bridge
between Berlin-Friedrichshain and Berlin-Kreuzberg
In the morning of February 9, 1981, the crew of a GDR border security boat discovers a lifeless body in the Spree. In the back pocket of the dead man's trousers, there are documents that reveal his identity: Peter Grohganz, 32 years old, from a small town to the west of Berlin in the state of Brandenburg.The crew of an East German border security boat discovered a dead body in the Spree on the morning of February 9, 1981. It had become entangled in a water barrier near the Flutgraben channel, east of the Oberbaum Bridge. The body, which had already begun to decompose, was secured with ropes, towed in and pulled out of the water at the Elsen Bridge. The dead man was wearing a brown jacket, a plaid yellow shirt and blue long pants. Personal documents found in his back pocket revealed his identity: Peter Grohganz, 32 years old, from a town in Brandenburg, west of Berlin. [1] What led the 32-year-old man to venture into the ice-cold Spree River in the middle of winter in an attempt to flee to West Berlin?

After completing school, Peter Grohganz began an apprenticeship as a metalworker, which he completed in mid-1966. [2] He later wrote that his mother had raised him with socialist values. At the age of seven he became a Young Pioneer and at 14 he joined the FDJ, the communist youth organization. Since 1963 he had been a member of the Society for Sports and Technology, which also organized pre-military training for youths. While serving his apprenticeship in March 1966, Grohganz drew the attention of the East German secret police because he was involved in the club committee of a youth clubhouse. He was not adverse to the idea of reporting to the Stasi about young people in the club who exhibited non-conformist behavior. It is not clear what drove the 17-year-old into the clutches of the Stasi. Was it his upbringing, a desire for recognition, pompousness, an eagerness for adventure, or the hope that it would bring him advantages? The Stasi noted that he “succumbs easily to the influence of negative youths,” openly smokes cigarettes from the West and has an “unbalanced character.” [3] Despite this, the Stasi wanted him. On June 22, 1966, Peter Grohganz agreed to serve as a Secret Informant and “expose enemies among the youth.” [4] In his handwritten agreement to work with the Stasi, he chose the code name “Runge.” [5] He was conscripted into the National People’s Army in the fall of 1966. Grohganz, just 18 years old, enlisted for three years. In the first year of his military service, he was assigned to the Armored Rifle Division of the 7th Tank Unit in Eggesin. He was later transferred to the “Ernst Thälmann” officer’s school of the land forces, where he specialized in the study of “armored rifle tank commandership.” The local Stasi district office in his hometown had recommended its Secret Informant to the MfS Main Department I, whose tasks included spying on soldiers. Peter Grohganz was designated an “Informant for Security” (IMS) and assigned to the officer’s school to spy on his comrades. He reported to his supervising officers about various matters, including a soldier who was possibly planning an escape, soldiers with fickle attitudes, negative talk that he heard – and also about a theft. [6] Then, in 1969, he too was accused of “stealing state-owned property” while on guard duty with a comrade. Grohganz was discharged from the officer’s school at the end of June 1969. He was sentenced a week later by the Dresden Military Court to four months in prison. The sentence was later commuted to a one-year probation sentence. The conviction and his “dishonesty” towards the Stasi led the secret police to end cooperation with him on October 30, 1969, after which it broke off contact altogether. [7]

Little is known about the following ten years of Peter Grohganz’s life. He married in 1969 and had two children with his wife. He worked as a trained metalworker on a construction site at the “Special Building Combine of Water, Weimar” in Niedergörne. He was a member of the Communist Party, but according to a report did not perform any functions. [8] Angered by a fine he was issued, he overstepped boundaries during a visit to the office of the mayor in his hometown in January 1975: He grabbed the public officer by the jacket and was said to have threatened him with the words, “You should be smacked.” He did not slap him, however, and apologized instead. Nevertheless charges were issued for “impairing state activities” (Art. 214, para. 1 of the GDR penal code) and he was fined 400 marks. [9] The Stasi files mention other thefts that occurred over the following years, mostly of “socialist property” but no further information was provided. Peter Grohganz now had a criminal record.

But then something significant happened: On April 5, 1980, Peter Grohganz made an appeal directly to Erich Honecker, chairman of the GDR state council, submitting a handwritten request to be allowed to leave the GDR. [10] “I no longer wish to provide my labor to a state that has had enough of me,” he wrote to the general secretary of the party. “As a criminal with several (3x) offenses on my record, it is impossible for me to start over with different work or in a different city (Berlin).” He was not prepared to wait two years or longer for a place to live, he continued, and absolutely not willing to “believe the empty phrases of a state doctrine.” He was still young enough to begin a new life. For this reason he was requesting the right to emigrate and “to live somewhere else and live better than until now.” A right to emigrate did not exist in East Germany and Peter Grohganz knew that. But he probably did not know that the chairman of the state council and his staff did not respond to these kinds of letters. They were passed directly to the Stasi “for further action.” The Stasi investigated the circumstances and determined whether measures were required to remedy the situation and induce the applicant to retract his “illegal petition.” If this was not possible, it was generally the requester, not the request that was processed by the Stasi.

When Peter Grohganz received the message from the state council that his “petition” has been sent to the appropriate state office for further processing, he was under the impression that his contact office was the district council’s department of internal affairs. He paid a visit to this office in late April 1980 but no one there seemed to know anything about his letter and he was encouraged to wait. He paid a visit to the Permanent Mission of the Federal Republic in East Berlin on May 2, 1980, perhaps hoping to put more pressure on the East German authorities. Following the advice he received there, he wrote a letter to his half-sister in West Berlin that was intercepted by the Stasi. In it he asked his sister to help him by sending a request to the West German federal minister of inner German relations, Egon Franke. [11]

The head of the department for internal affairs looked into the matter personally and discovered that the Stasi had been in possession of Grohganz’s letter since April but had not informed his department. Grohganz was summoned to a fifth meeting during which he may have been informed of the situation and the futility of his housing request. He wrote a brief statement: “I hereby request that my emigration application, which had been submitted in anger, be withdrawn.” [12]

On September 23, Peter Grohganz paid a visit to the MfS office that he knew from the days when he had cooperated with the Stasi. There it was put on record: “Now he has the chance to start over again. He wants to begin work as a driver for the central circus and has to be available for this.” [13] He had been promised an apartment - and it had always been his wish to become an animal caretaker. He asked the MfS for its support in issuing him a regular ID. Because of his criminal record, he was only permitted to have a “PM 12” – a temporary ID that limited his freedom of movement and required him to report to the police regularly. He probably did not find the Stasi employee’s advice that he try contacting the People’s Police office very useful. He had already been informed by that police that a decision would not be made for another six weeks at the earliest. His hope that the MfS could expedite the situation on his behalf was not fulfilled. The only assurance he received from his Stasi contact person was that he could rely on the full support of the state offices as soon as he had shown that he had broken with the past and began leading an impeccable life. Was it a lifetime dream, or perhaps only a fixed idea that was crushed during this conversation?

After the body was found in the Spree on February 9, 1981, the Stasi learned the following: Peter Grohganz, still employed in early 1980 as a driver for the Building and Assembly Combine in Brandenburg East and working as a driver since late May for a furniture company, transferred in early October 1980 to a job as metalworker with the VEB Steel Plant in Brandenburg. He had also moved into a new apartment there. He worked there until December 10, after which he took three days off of work and never returned. On January 5, 1981 his personnel file was requested from the VEB public transport company in Berlin and sent back without comment on January 23, 1981. Before leaving for his short vacation on December 10, 1980, Peter Grohganz left a letter with a colleague at the steel plant. Its content was summarized in a Stasi report: [14]: “You will be surprised when I don’t return. Please send the coffee machine to Mrs. X [15], Brandenburg. Please give the other things away. The rest of my wages should be given to my children.”